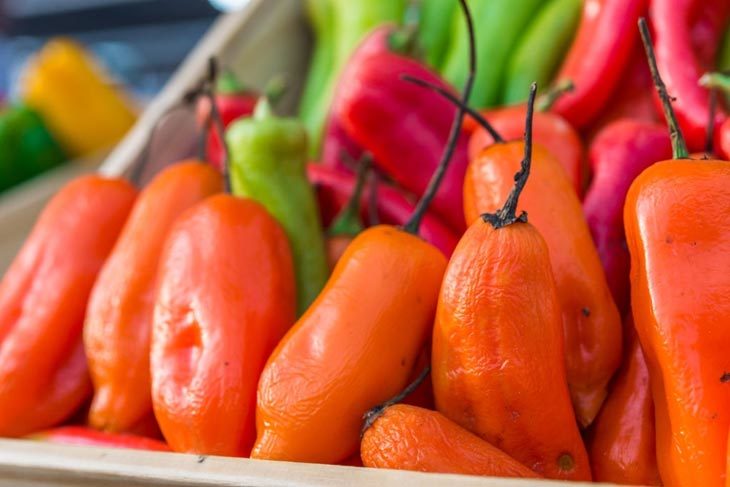 Aji Amarillo is one of the five domesticated pepper species that is widely used in Peruvian cuisine. While Aji pepper is the most consumed in Peru, you can’t always find fresh Aji pepper in stores.

What if you need to use it for your crema de ají or salsa sauce? This calls for an Aji Amarillo substitute. Learn more about this in today’s article!

What Is Aji Amarillo?

Aji Amarillo is a cultivar of Capsicum Baccatum grown in all regions of Peru. This Aji Amarillo chili pepper is one of the staple ingredients in Peruvian cuisine, along with red onion and garlic.

It features several recipes in Peru, and even the Incas use this chiles ajis, reflecting its long heritage site. Aji Amarillo en inglés has always been heating a nation’s blood and still does for long after.

The name Aji Amarillo in English means “yellow chilli.” Its meaning comes straight from the original name, with aji translating to English as “chili” and Amarillo as “yellow.”

Despite the name, mature Amarillo chiles have a fiery orange- similar to the sun, so Peruvians often call it “sun chilli.” The Aji chili pepper has a slim body with a length of about 4 to 5 inches. Their skin is quite thick yet very smooth.

Aji Amarillo scoville falls in the middle of the medium heat segment – at 30,000 to 50,000 Scoville heat units. The heat of yellow aji is like tabasco chilies or cayenne pepper, yet comparing it to jalapeño point, it is 4-20 times hotter.

Fresh Aji Amarillo can be purchased in many countries of South America. However, if you can’t find the fresh form, frozen or dried Ajies Chilenos or even jarred Aji Amarillo paste is acceptable to use in place of the fresh one.

Find them in the Peruvian section of a Latin American grocery or the spice section of Peruvian grocery stores; you will definitely see one.

Some people said the flavor of this Aji Peruano en ingles is similar to a Scotch bonnet pepper, yet much milder. However, to us, Aji Amarillo has a vibrant and fruity (berry-like) flavor.

Yes, it is spicy! Still, the spiciness is not mild like a newly simmering water pot or burning like 100oC hot water that can outweigh other tastes.

Its hot is like a touch to your tongue – a small lift, yet still leaves you impressed with its flavor.

While Habanero pepper appears to be a lot spicier than Aji pepper, the two ingredients are interchangeable.

Apart from sharing almost the same appearance, both foods are also quite similar in terms of flavor, which is unique, smokey, and citrus-like.

Habanero pepper is the first choice that comes to most chefs’ minds when they can’t get their hands on Aji Amarillo.

Habanero pepper is excellent when combined with fruits like apples, oranges, or pineapples. It is commonly used to make a fruity, sweet-yet-spicy sauce for dishes.

It is worth mentioning that Habanero has a Scoville heat range of 100,000-350,000. This means the ingredient is not family-friendly unless all of your family members have really good spiciness tolerance.

If you’re one of those who can eat Habanero pepper, you’re getting the immense health benefits it brings, including bad cholesterol reduction, better blood pressure control, and more!

The Scotch Bonnet pepper is closely related to the Habanero pepper, which explains why it makes another good Aji pepper substitute.

At maturity, Scotch Bonnet comes in orange or yellow, just like Aji and Habanero. As the flavor is fruity and bright with a touch of sweetness, it goes really well with hints of tomato, apple, or cherry.

Since Scotch Bonnet pepper is a lot spicier than Aji pepper, consider adjusting the proportions accordingly next time you’re using the ingredient in your recipes.

You may notice a slight difference regarding the flavor of the two foods. While Scotch Bonnet pepper has a more apricot/fruit-like flavor, Aji pepper tastes more grassy.

Serrano pepper is the best heat substitute for Aji Amarillo, even though it might be a tick under Aji, with a SHU in the range of 10,000 to 23,000.

However, the flavor profile of these two chilies is quite distinct. While Aji pepper has a fruity and grassy taste, somewhat like summer in a bite, Serrano has a bright, crisp bite.Serrano pepper is, in fact, much like Jalapeno pepper but smaller.

Although peppers like Cayenne and Tabasco are more similar to Aji Amarillo, it’s harder to find them in stores. Serrano pepper, on the other hand, is faster to come in sight.

If your recipe mostly calls for the heat from Aji, Serrano pepper is your best bet. But if you want to take advantage of the fruity flavor of Aji, you will be losing out here.

Manzano Chile, also known as apple chili, has a good eating level of heat – from 12,000 to 30,000 SHU. Surprisingly, this pepper tastes quite sweet for the heat it holds.

Worry not! Even though it packs a jab, the spiciness won’t be so much to overwhelm or prevail the fruitiness.

Manzano is often used to make salsa sauces or dressings. Its paste is a perfect substitute for Aji Amarillo paste.

Some people even cut this pepper into slices and grill them as a side dish or make pickled Manzano. They’re actually quite tasty if you have a good spiciness tolerance.

Frozen or fried Aji pepper also works if you just break the rule of eating everything fresh sometimes. More importantly, they can be found at any grocery store.

Some people believe you cannot find a perfect Ajies dulces substitute due to the distinct and rich flavor.

That’s why we include frozen or dried Aji as an option. Thus, this ingredient is also rich in nutrition to help with fluid regulation, cholesterol control, and more.

How To Choose An Aji Amarillo Substitute

You may be able to replicate the texture of Aji Amarillo while it is in the paste or sauce form using other types of peppers. However, finding the same one as the real yellow Aji can be a hard challenge.

Therefore, when choosing the Amarillo substitute, seek those with a similar flavor or any that can be interchangeable with the chili.

Try to find a replacement suitable for the recipe you follow to avoid ruining the dish’s overall taste. You can even use substitutes that are in different forms like dried, paste, or powder.