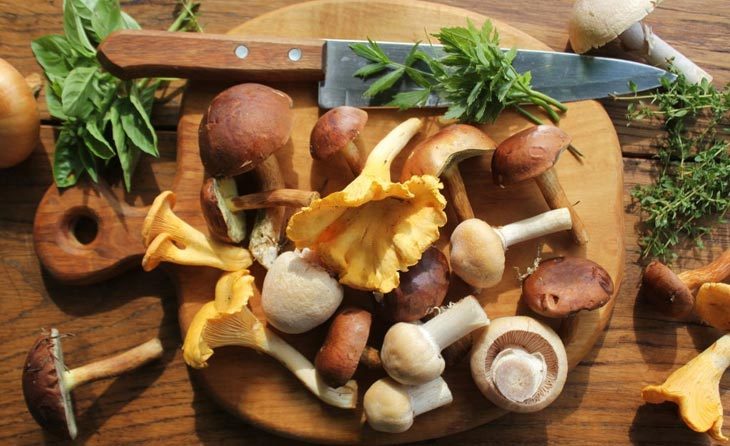 Mushrooms are a great food to eat because of their high levels of nutrition.

They contain large amounts of vitamins and minerals that are essential for health, helping the body to prevent disease for a healthy life.

However, many people do not fully understand mushrooms and still consider them to be plants. So people often ask, “Are mushrooms vegetables?”

Some documents will say that a mushroom is a vegetable, but technically a mushroom is a fungus, not a vegetable because they are different from vegetables. Fungi are heterotrophic, which means they get their energy from the environment, not from sunlight.

Mushrooms are not classified as plants by scientists because they have many properties that normal plants do not.

However, in terms of nutrition, the U.S. department of agriculture still classifies mushrooms as vegetables because both seem similar in contributing nutrition values to the dishes. That is the reason so many people are confused.

So, what kind of mushrooms that we can eat?

What Types Of Edible Mushrooms?

Over the world, there are more than 10,000 different types of mushrooms including edible mushrooms, poisonous mushrooms, etc.

However, it’s only 39 varieties of mushrooms are edible.

Among them, the most popular kinds of mushrooms which widely used in cooking should be listed Shiitake mushrooms, Agaricus Bisporus (white button mushrooms), portobello mushrooms, and Orel mushrooms.
The above list of edible mushrooms almost belongs to part of the mushroom that grows underground or on logs called mycelium.

Nowadays, people want to discover new things, especially about nature. So, sometimes you go traveling and find some wild mushrooms, then wanna try to eat them.

But be careful! there is 3% of wild mushrooms is the poisonous mushroom. What happens if you eat one of them, so we highly recommend not eating before you know well about them.

How Many Types Of Fungi?

this type of fungi almost belongs to wild mushrooms. Because they are grown and live on the tree, take all nutritions to live from the tree until die.

They didn’t contribute anything back to the tree, so it will be rejected due to the law of nature.

This type is considered a symbiotic relationship between the mushroom and root system of the tree. They eat the nutrients that are taken from the tree, but also help the tree root get better and better.

Some popular edible Mycorrhizal mushrooms may include cremini and portabello mushrooms.

Saprotrophic mushrooms are grown for the plant such as tree roots, or dead leaves (organic matter) that they killed by releasing the enzymes and acids to decompose tissue into small molecules, then absorb them.

Based on this feature, saprotrophic mushrooms were widely produced in mushroom farms.

This type of fungus provides a lot of nutritional value and health benefits as well. What is it?

What Are The Health Benefit And Nutritional Benefits Of Mushrooms?

Not only delicious food, but this also doesn’t take away from the fact that mushroom consumption gives a ton of health benefits to our body.

There are many kinds of mushrooms such as shiitake mushrooms, needle sticks, oyster mushrooms, or chicken drumsticks that also work to enhance resistance, anti-aging, lower risk of heart disease, and reduce cholesterol levels.

Especially, new research shows that mushroom extracts can reduce estrogen, which can prevent breast cancer risk. However, that is an animal trials report for reference only, not official reports.

Besides, the fresh mushroom is a good source of vitamin D, B1, B6, B12, PP and pantothenic acid. Recently research shows that a huge of vitamin D will be generated by illuminating ultraviolet light in mushrooms.

The UV light will convert ergosterol in mushrooms into vitamin D. Thus, mushrooms contain high calories, helping you get enough energy to work.

It also fights inflammation, activates liver enzymes, and aids in the deactivation of prostate cancer-causing elements.

Mushrooms are an excellent source of fiber with a relatively high value, even higher than some plants, for instance, sweet potatoes or tomatoes.

Nutrition experts and professionals have announced: Same as red bell peppers, the mushroom is a great source of dietary fiber, on average, a 100-gram serving of mushrooms contains about 1.02 gram of dietary fiber,

Depending on the type of mushroom that may contain higher levels, such as dried mushrooms with 21 grams of fiber and abalone mushrooms containing 8-14% by weight of fiber.

In general, eating mushrooms will boost your immune system.

One more good news for the person who has been hypertensive. There is one kind of edible mushroom that may help lower blood pressure – the Reishi mushroom.

Don’t worry this type is safe for eating but make sure you are not pregnant or breastfeeding.

Have you ever wondered why mushrooms have so much nutritional value? The answer is a mushroom’s characteristics.

What Are The Characteristics Of Mushrooms?

Mycelium is a vegetative organ consisting of septum cells, each with two nuclei, and free of chlorophyll.

Hats are usually conical or funnel-shaped, with a sticky stalk in the middle or side. The underside of this group is composed of thin sheets that are arranged close together like spokes. In some cases, the blade extends from the cap to the stem.

In cuisine, people often use the body and the mushroom hat to process food. However, it is necessary to prepare very carefully because many types of fungi contain toxins that can cause poisoning and danger to humans.

Mushrooms have a symbiotic relationship with almost all other plants. Their relationships can be mutually supportive or mutually exclusive.

The symbiosis with plants has a long history, at least from more than 400 million years ago, which is also known as mycorrhiza.

It is divided into two types: mycorrhiza (endomycorrhiza) and external mycorrhiza (ectomycorrhiza). We can easily find both of these kinds while picking mushrooms in the forest.

This is the best known fungal complex. They play an important role in plant growth and many ecosystems. More than 90% of the plant species are fungal-related in the mycorrhizal form and depend on this affinity for survival.

They often increase the ability of plants to absorb inorganic compounds, such as nitrates and phosphates.

In some mycorrhiza, the fungal composition can act as an intermediary between the plant and the plant, transporting carbohydrates and other nutrients.

Some mushrooms can stimulate plant growth by secreting plant hormones, such as indoleacetic acid (IAA). Also, they can secrete mycotoxins to prevent herbivores from eating their hosts.

These toxins are the cause of mycotoxicosis, causing many dangerous diseases for humans. If it is mild, you may experience abdominal pain, dizziness, and severe health conditions such as coma or death.

3/ The diversity of mushrooms

Mushrooms are distributed around the world and grow in a variety of habitats, including deserts. You can easily find a specific mushroom substitute everywhere on Earth.

Most of them live on dry land, but some species are only found in aquatic environments.

Mushrooms are major decomposers that play an important role in terrestrial ecosystems around the world.

There are about 70,000 species of fungi that have been discovered and described by taxonomists. Still, the actual size of the fungus diversity remains a mystery.

Most fungi grow as multicellular filaments called mycelium, which makes up mycelium (or mycelium), while other species develop a single-cell amorphism.

Until recently, many mushrooms have been described based on morphological features. These contain sizes and shapes of the spores or pods, or organism concepts.

This has greatly increased the way and ability to estimate fungal diversity within different taxonomic groups.

How To Preserve Mushrooms

Mushrooms often have a short shelf life, difficult to preserve freshness. They can be severely damaged in just about 1 to 2 days. It would help if you only bought enough to eat. In the event of a hoard purchase, we will show you the proper storage.

Store the mushrooms at room temperature

Mushrooms can be kept fresh for four days if kept at 10 – 15 degrees Celsius. If you want to keep mushrooms longer, put them in vacuum bags and put them in the refrigerator.

If not, you can also use the way to blanch the mushrooms over boiling water for about 2 minutes and then take them out and drop them into cold water and let you put them in the refrigerator cooler.

Preserving the mushrooms in salt

You should simmer the mushrooms in boiling water and salt for 10 to 15 minutes. Once the mushrooms are softening, remove them quickly and let them cool.

Wait a while, then put the mushrooms in a clean bottle, soak them in saltwater with a concentration of 20-23%.

During such a salt bath, if the brine is cloudy or moldy, it is advisable to change to another saltwater to avoid infection. This way, you can keep the mushrooms for several months.

If you want to preserve it for longer, you should not refrigerate and dry the mushrooms. First, you need to use a small knife to cut the mushrooms in half and dry them in the sun.

It is much better than canned mushrooms you get from the supermarket.