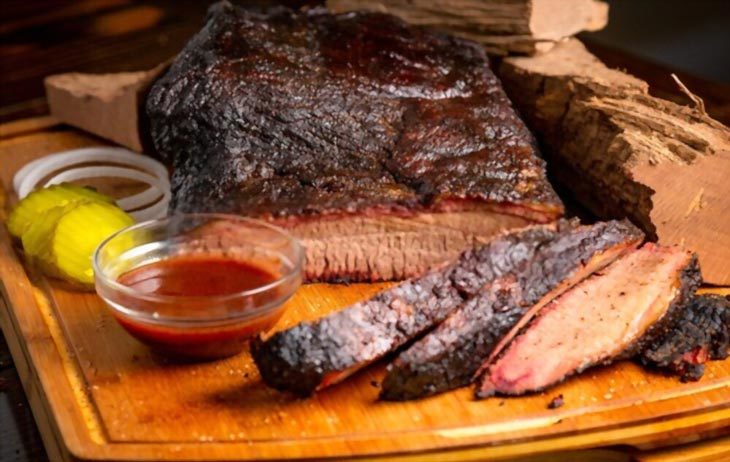 Have you ever heard of brisket deckle? If not, then we’re sure you’ve missed out on one of the most delicious parts of a brisket!

Scroll down to get yourself the answer for what is a deckle of beef, where is the deckle on a brisket, and how to prepare it for the best flavor!

What Is Brisket Deckle?

The beef brisket deckle, also known as the second point cut of brisket, contains a lot of fat inside. This fatty deckle is not commonly sold in supermarkets.

Brisket Flat: The flat, referring to the first cut, contains the leaner muscles. It got this name since it lays flat when the brisket has deckle fat removed.

Brisket Point: The point is the small, thick part with lots of connective tissue. If cooked properly, brisket deckle cut is considered the fattest and most flavorful dish.

A perfectly cooked meat is a complete serving, yet you can enhance its deliciousness when combining the dish with other foods such as corn, potatoes, coleslaw, bread, etc.

Although these two portions offer succulent dishes, they have certain differences.

The flat is the ideal choice if you’re into a well-sliced one. Instead, if you want to savor the rich flavor, then brisket deckle fat is the right one. Remember that such a high-fat deckel will produce less meat as you finish cooking.

In case you don’t have a chance to experience the typical flavor of this meat cut, you can refer to tasty substitutes such as beef clods, chuck roast, etc.

How To Separate Flat And Point

Dividing into two separate parts is a necessary food preparation since it assists you in making the most of the cooking time and the dish’s flavor.

Such separation increases the surface area of each part, which means the marinade penetrates evenly into each meat grain- in turn, the flavor will become stronger.

It also makes adjusting the cooking time easier, as the well-cooked point usually takes longer than the flat one. In case you don’t separate these parts, you may end up with the juicy point but dry flat.

Here is the instruction you can follow to separate them.

Step 1: Place the meat on a flat surface and define the flat and the point.

Step 2: Place a sharp knife at the fat seam and cut along it.

Step 3: Continue to use the knife to trim the excess fat.

Then, you will have the two portions ready to prepare for the meal.

How To Cook & Serve Brisket Deckle?

For deckle cut brisket– a tough cut of meat to become a tender and succulent dish, you need to cook it low and slow. Here are the cooking methods you can employ to have a great meal.

Firstly, choose a large oven to help distribute the heat evenly throughout the browning process. Make sure you pat the deckle dry, as a moist surface can result in an unexpected browning. Then, use high heat to sear the meat.

After browning, you will see a caramelized layer on the pan’s surface. At this point, use the liquid to deglaze the sticky layer, creating a nice color for the sauce.

Finally, place the point cut back in the pan containing the sauce, broth, or wine and simmer it for 3 to 4 hours. Then, you can enjoy a delicious deckel dish.

Unlike roasting using heat or fire for cooking, smoking is a cooking method that uses smoke to increase the flavor, aroma, and color of food. You will indeed be surprised at the advantages of smoking meat, as it makes your meal more mouth-watering.

Before putting the fatty deckel in the smoker, season it with salt and black pepper and let it at room temperature for 1 hour. Also, prepare a smoker with a temperature between 250° F and 275° F.

Then, place the point in the smoker for a sufficient time. Once the crust is formed, wrap the meat tightly with butcher paper and return it to the smoker.

Finally, let it rest for about 1-2 hours before serving.

Slow cooking is a method of using low heat for cooking food. As a result, the deckel meat remains moist and tender without losing its rich flavor.

Nowadays, many cooking appliances have a built-in slow cook mode. Hence, all you need to do is put the meat in the cooker, set the cooking program, and let it do the rest.

Remember to brown the meat before placing it in the cooker and always place the fat side up. Also, pour your favorite sauces into the meat to enhance its flavor.

The burnt ends originated from Kansa City- Missouri, are trimmings made from smoked deckles.

Here is the recipe following the Kansas City cuisine.

2. Season your deckle with salt, black pepper, and garlic powder.

3. Place the marinated in the smoker and close the lid. Wait until the point reaches 165° F, then put it out, wrap it tightly with butcher paper, and return it to the smoker.

4. Continue smoking until the temperature inside reaches 195° F, then put the brisket point to the cutting board.

5. Open the wrapping paper, pour the liquid into the aluminum pan.

6. Cut the point into bite-sized cubes.

7. Place such cubes in the aluminum pan and toss with the Kansas sauce and brown sugar.

8. Place the pan on the smoker and continue smoking until the sides of the cubes have soaked in the BBQ sauce.

9. Present on a plate and enjoy!

Instead of fresh-cut, you can use leftover smoked ones to make this specialty. Reheat them as you reheat corned beef, toss them with the sauce, and you’ve got burnt ends.

After reading this article, I hope you know all about what is the deckle on a brisket and what does deckle-off brisket mean. Brisket deckle is absolutely a dish worth trying due to its flavorful taste.