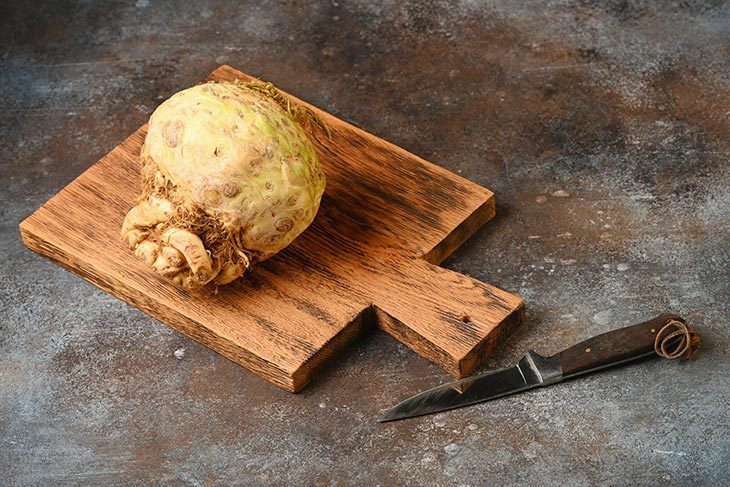 Has this ever happened to you – you are trying to cook a new recipe that calls for celery root, but you cannot find it anywhere? If this is you, I can help.

Below, you’ll find some great vegetables that can serve as a celery root substitute.

These ingredients are easy to find and most are things you probably already have in your kitchen. Keep on reading!

Celery root is a popular vegetable that is often used in soups or salads. Many people regularly misunderstand that celery root, as its name suggests, is the root of celery. In fact, it is not.

Celery root actually is the root of a plant called celeriac. Instead of eating stalks like celery, we grow the celeriac to harvest its roots.

Celery root’s fragrance is a combination of celery and parsley, while its taste is quite sweet and creamy.

You can eat celery root both raw and cooked. When cooked, it is precisely like a starchy mix of turnips and potatoes, which is especially perfect for soups. Meanwhile, it is crisp and crunchy when eaten raw.

Before eating celery root, the first thing you need to do is remove its skin before using it in different ways depending on your recipes.

After skinning, the root celery begins to oxidize and darken when it comes in contact with air.

So, if you do not use it right away, soak it in a bowl of water with a little lemon juice or vinegar to keep its bright colors.

Can You Replace Celery For Celery Root?

Celery root is known as a distant cousin of celery, so basically, the taste of them is quite similar.

The only difference is that the celery root tastes creamier and sweeter.

In some cases like making a salad, if you cannot buy celery root, you can use celery instead.

However, for several soup recipes that require a smooth texture, using celery is not okay. At that time, knowing some celery root substitutes will help you a lot.

So in the following part, I will introduce you to the top 5 amazing veggies that can entirely replace celery root. Let’s go!

What Can Use As Celery Root Substitute

Carrots are one of the most popular ingredients that you can easily find in any kitchen. If you want to cook soups or stews, carrots are a great substitute.

Celery roots create a sweet taste when cooked, and so are carrots.

However, since carrots do not feature the typical aroma of celery root, if the fragrance is the star of the dish, you should add some celery to your recipe.

Parsnip has a celery-like taste, but its herbal smell is a bit stronger. Light, smooth, and starchy in texture, it can be used to make stews, soups, or salads.

So if you cannot find celery root, parsnips are the perfect replacement.

In salads, there is nothing more ideal alternative to celery root than jicama. It looks quite similar to potatoes that give you a crunchy texture and a mild sweetness.

To prepare before eating, you also need to remove its skin, cut into thin sticks, then dice it.

Jicama is commonly eaten raw, but you can still cook it if you’d like. In this case, you should only cook this ingredient for a short time to maintain its crunchy texture.

Daikon radish is a white fleshy tuber, looking like a big white carrot. It is mainly planted for its root, but the green tops are also edible.

Unlike the regular radish which has a strong peppery taste, daikon radish offers a mild flavor and crunchy experience – all make it an excellent substitute for celery root.

You can enjoy daikon radish raw or cooked, but it tastes best when you use it to make salads or fried dishes.

But, just like carrots, daikon radish does not have a parsley-like smell. If you want to level up the aroma of your dish, you can combine this ingredient with a bit of coriander or celery.

Fennel bulb is the white part of the fennel with overlapping stalks and green leaves. It has a sweet flavor and crunchy texture.

When eaten raw, a fennel bulb has a celery-like smell, but it tastes like anise when cooked. If you want to make a fish dish, this vegetable is the perfect substitute for celery root.

However, because the fennel bulb is softer and cooks more quickly than celery root; if you wish to cook it, you need to shorten the cooking time.

A useful tip here is that you should only add a fennel bulb later on when your meal is almost cooked to prevent it from being mushy.