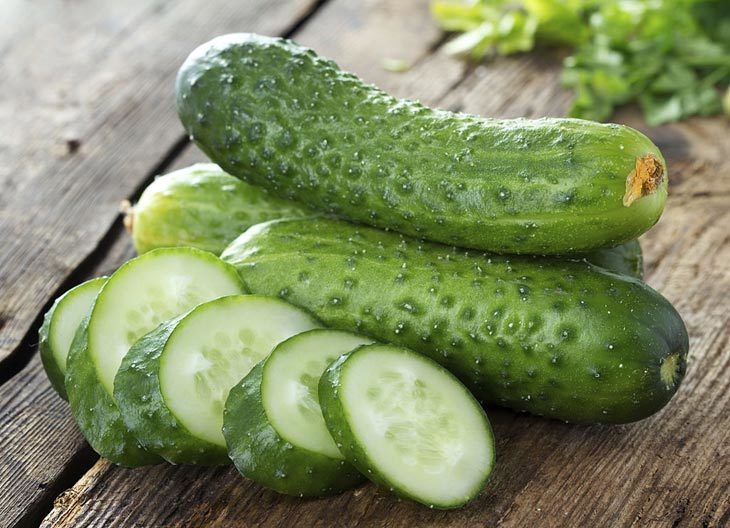 Cucumber is a healthy veggie to enjoy in your healthy eating routine, including salads, soup, or even drinks.

But not everyone likes cucumbers. Some people dislike its smell, while others may get an allergy after eating cucumbers.

For people who cannot consume cucumber, there must be another vegetable to use instead. So, is there any cucumber substitute that resembles this vegetable for cucumber-allergic people? Let’s have a look at our list with the best alternatives!

8 Vegetables Used As A Cucumber Substitute

Radish is one of the most easy-to-find options when you are looking for a cucumber alternative. Radishes are winter vegetables with white, crunchy flesh with a slightly peppery flavor. This root vegetable has the same crunchiness and juiciness compared to cucumber, which is vital when you want to substitute cucumber extract.

Radishes are best used to substitute cucumber in salads, soups where you want to have the crunchiness of cucumber. You can even use fried Daikon radish to create a fun, crunchy side dish that is more delicious than fried cucumber.

Besides, another similarity between these vegetables is that they all have a signature smell. Although it is a completely natural veggie smell, radishes’ smell can be slightly odd, so you better check radishes first before putting them in dishes to replace cucumbers.

Radishes are practically sold every season throughout the year, so it won’t be a big deal getting cheap and quality radishes when you visit local markets or supermarkets.

Radishes are cheap vegetables that can be implemented into various dishes depending on your cooking imagination. Moreover, with a few seeds and some gardening space, you can grow your radishes and harvest them for your food. How great and organic a substitute for cucumber like radish can be!

Although we are all familiar with pink-skin and white-flesh radishes, black radishes impose a stronger flavor than traditional dishes. If you want to increase the strong spice in a dish using vegetables like cucumbers, black radishes are a cool choice!

As fennel and cucumber don’t share many similarities in appearance, you may be surprised when we say fennel is a great vegetable similar to cucumber to use. If you love fennel or fennel seeds substitute, all of these green veggies can replace cucumber.

Fennel has a strong and rough flavor, especially at the bulb part resembling a cucumber. If cucumber does not make such a flavor impact when cooked in stew or soups, then using fennel will help maximize the vegetables’ flavor more vividly while ensuring that the recipe’s sense remains.

Moreover, one special thing about the fennel is that you can eat every part of it. From the bulks to the fennel seeds to the stalk, you can choose which part to cook depending on your recipe’s choice.

Overall, fennel has a slightly aromatic bitterness which can complement various dishes other than using cucumber solely. The bulbs offer the same crunchiness as cucumbers, while the flavor substitute can be created using fennel seeds or stalks.

Additionally, you can enjoy raw fennel to eat in a salad or cook it in soup to enjoy the signature cool sweet bitterness.

If you have a healthy diet, we assume that you are no longer unfamiliar with celery – one of the most nutritious veggies you can find. If you are tired of drinking cucumber juices, try a glass of celery to experience a new freshness that offers numerous beneficial ingredients for your body.

Unlike cucumbers with a bland flavor, celery’s signature mix of bitterness and saltiness makes it perfect for making juice. Other than that, you can get the cucumber’s crunchiness from celery as well as from its bright green stalks.

Celery can be used to substitute cucumber in various dishes as well. It adds both crunchiness and organic vegetable taste to your desired dish with an extra bitterness, which can be an exotic factor to make your dishes delicious. Feel free to use celery in any dish besides cucumbers like green snacks, soups, or salad to experience the cool identity of celery.

Like fennel, you can take any part in celery to create a good dish, from celery stalks to celery seeds to even some options of substitute for celery seeds. Celery is such a beneficial veggie packed with numerous healthy vitamins and antioxidants. In Particular, celery is one of the ideal vegetables similar to cucumber for weight loss.

If you want to replace cucumber in your children’s portion, start with a few slices of lettuce. Iceberg lettuce will be the number one Persian cucumber substitute, but the original one would also be fine if you can’t find this specific lettuce.

Lettuce is an easy, crunchy vegetable to start with for vegetable-struggling people. It does not have a specific flavor that can be too overpowering for you to smell, and it has the crunchiness to soothe your appetite.

In Middle Eastern salad, including fattoush and tzatziki, lettuce is primarily used to replace cucumber since it is much cheaper and easy to find in the neighborhood.

Your children may prefer enjoying cool, crunchy salad more than cucumber alone, so think of purchasing lettuce when you run out of options on vegetables like cucumber. Start by including lettuce in your child’s hamburger and let him be familiarized with green vegetables first before introducing him to cucumber.

You may have never heard of Jicama before. Well, it’s a Mexican herbal vegetable that resembles cucumber in texture. Jicama is a great replacement for cucumber as it offers the same crispiness, same white flesh in appearance, and extremely nutritional value. Rather than being cool like a cucumber, Jicama’s flavor is milder with more powdery content.

Jicama can be served raw after washing, peeling, and slicing into slices to eat as a snack. If you want a cool vegetable to enjoy while having a diet menu, try Jicama as a tasty and healthy delight with high vitamin and inulin content. Spicing delicious Jicama requires herbal spices, chili powder, and lemon juice extract.

One special thing you need to know about Jicama is that only the root is edible. The rest of the Jicama has natural toxins that can make you suffer from food poisoning once you accidentally eat it. Thus, it’s important to use the root only to substitute cucumber.

Apparently, zucchini is one of the members of the list of vegetables that look like cucumber. As you know, zucchini and cucumber look similar from their tube-shaped, green skin appearance, and surprisingly, they have quite the same texture and flavor as well.

Both winter vegetables have juicy content and crunchy texture, so you can practically replace them one and another in any dish, using cucumbers as a replacement for zucchini.

Compared to cucumber, zucchini is quite sweeter, but that sweetness is an ideal advantage as it eliminates the bland content from cucumbers. You can slice zucchini into slices or pieces to eat in a salad or serve as a side dish.

For dishes that include stewed or cooked cucumber, zucchini can perform perfectly as well, under the condition that you don’t overcook this vegetable by boiling. High temperature can cause zucchini’s core to swell, which will not look good in your final dish.

If you are lucky to find zucchini in local markets or supermarkets, do not hesitantly purchase this English cucumber substitute! They are super versatile to cook with, and alternatively, you can serve delicious dishes using zucchini or any zucchini substitute.

Squash is a frequently used vegetable that looks like cucumber; that’s why it has a lot of versions. Among all kinds of squash that you can find, crookneck squash makes the perfect cucumber substitute. Like cucumber, crookneck squash has a similar appearance by the bottleneck shape and the pale green color.

The similarity in their appearance also includes the texture, in which crookneck squash have the same crunchiness and juiciness that cucumber offers.

Since squash is a summer vegetable, you can use this option instead in hot-weather time to substitute cucumbers. You can be playful with cooking techniques with squash, from frying to baking, boiling, etc., and still receive tasty dishes. Squash can be used to make juice, so instead of using cucumber in drinks, try to alternate one cucumber with one squash and see the fun twist’s result!

Other than yellow or red bell peppers, green peppers taste a little sour besides being sweet and peppery, making the whole flavor resemble cucumber. They are also crunchy with a beautiful green color that can complement your dishes’ visuals. Prepare diced and sliced green bell pepper to replace cucumber in certain dishes and see the amazing results!

And that’s the best choice of cucumber substitutes. With this list, you can learn what vegetable resembles cucumber to make a switch when cucumber is not your favorite choice.