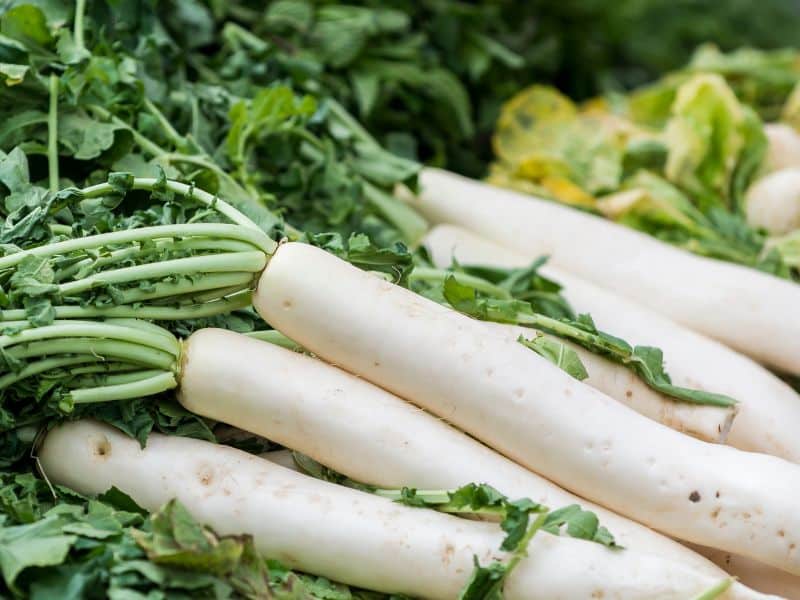 Unlike any regular vegetable that is used frequently, like a cauliflower or cabbage, the daikon radish is a new Asian element in the world of green food. This special kind of radish is well known among Asian cuisine rather than Western. However, its flavor can jump into many Western recipes and change the whole game.

7 Ingredients to Use As Daikon Radish Substitute

White turnip is the kind of daikon substitute that can offer you the most alike experience compared to daikon radish. Because of the similarity in appearance, texture, and flavor, white turnip can be used to replace daikon radish in any kind of dish it is presenting.

White turnip has the crunchiness that daikon radish offers, and the flavor reflects mildness. However, turnips’ flavor can be more subtle in dishes that require strong taste, so it is necessary to upgrade white turnips before using them to substitute daikon radish completely.

Since there are many members in the radish family, you can use red or pink radish to substitute for daikon. If you are worried about the color difference, put that away because the color does not define each radish type too differently.

Red and pink radishes have the same crunchiness and texture as daikon radish, and those similarities are more critical. While peeling red or pink radishes, you’ll get a substitute for daikon radish that works especially well in fried dishes.

There is only one thing to consider while substituting daikon radish with its siblings: the different slight note flavor. While daikon radish’s flavor tends to be mild and refreshing, red radish has a more pronounced flavor with a hinge of spice.

In some dishes, the overpowering flavor of red/pink radish can ruin the elegance of a dish. Other than that, for dishes that don’t significantly require the daikon flavor, red or pink radishes are so much more accessible.

Like daikon radish, jicama is also an Asian-specialized vegetable that seems hard to find in Western countries, so this radish substitute might be available to tropical places only. Jicama is crunchy, white-texture with a mild flavor, which makes it the perfect substitution for daikon radish in any kind of dish.

You can check out Asian markets in your place to see if jicama is available when you cannot find daikon radish since it is an excellent duplication. The difference lies mostly in flavor: jicama’s flavor is more fibrous than daikon radish’s.

Remember to wash these veggies carefully before cutting them out. This is one of the veggies that resemble daikon radish most on flavor aspect.

The alike texture and color of parsnips make these veggies one of the best backup alternatives for daikon radish. Moreover, they can be found in any grocery store without you spending too much effort finding them.

With a sweet undertone in flavor, parsnips can substitute for radish in salads or side dishes. However, parsnips’ flavor may turn out to be too gentle often compared to daikon, so keep this in mind while substituting daikon vs parsnips.

If you start to run out of radish options, then think of using cabbage. Cabbage might not seem to be related to radish, but it has a certain level of crunchiness that you can use to replace daikon in certain cases.

The most critical part in cabbage that can substitute daikon well is the white core, so don’t put it away as you would usually do. If daikon plays a small role in, for example, a soup or a casserole, cabbage can solve the problem.

Known as a worldwide spice, Horseradish root, with its spicy touch, can be used to substitute daikon radish in the case when you want your radish to be flavorful. Mix horseradish root with salt and vinegar can create a similar alternative to daikon radish.

What’s The Difference Between Daikon Radish Vs Red Radish?

Daikon and radishes both come from the same origin but turn out to have some significant differences. While daikon is mild and light in flavor, red radishes are known for their hot and peppery spice.

In the radish family, there are also Korean radishes called mu, which resemble daikon most in appearance and taste. Watermelon radish from China, on the other hand, resembles red radish with a green outlook and pink color inside.

How Long Does A Daikon Radish Last?

Like any other green vegetables like celery, for example, daikon  has its own life expiry dates. Normally, a daikon radish can last for 2 weeks when stored in a plastic bag under cool fridge temperature.

The storing time can be prolonged if you choose to store daikon in the freezer. By cutting daikon radish into small pieces, blanching in boiling water for 2-3 minutes, then taking out, putting them in a sealer, the veggie can last for 2-3 months.