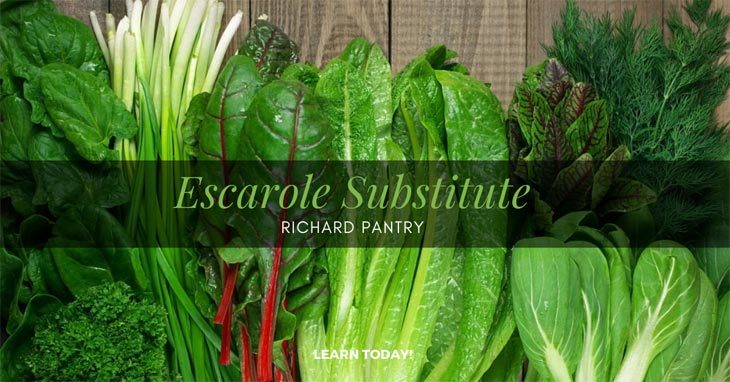 Escarole is famous for being a healthy, fresh food for health. Its delicate, juicy texture and neutral taste make escarole become a great combination with any ingredient given.

Suppose you want to use escarole in the meal, but it turns out there is no plant available now. Then, which greens can work well as an escarole substitute? Let’s read this post to find out!

What You Need To Know About Escarole

Escarole is widely used in the culinary world for two reasons: this plant is healthful, and it works well to complement the flavor of other ingredients in the dish.

Therefore, it is reasonable to see escarole used broadly in many different recipes, from Asian, the Middle East to European dishes.

To be specific, what does escarole taste like? Well, the escarole contains a mildly bitter but not significant taste. Its texture is thick and fleshy, taking us a long time to cook.

You may wonder, “What is a good substitute for escarole?”. In our opinion, the selected one must provide a similar taste or have a compatible texture with escarole so that you can use these two interchangeably.

Besides, this plant, when toasting with other vegetables like navy beans, asparagus, potatoes, creates an unexpectedly good flavor.

Adding some oil to raise the dish’s fattiness and those sauteed vegetable meals are delicious enough to enjoy.

In fact, the escarole can be served raw, either. The most common way to cook it when raw is to mix it in salads with other ingredients like horseradish, tofu, basil, and bonus a bit of vinegar to raise the acidity.

Escarole is famous for containing a high amount of nutrition. There is a high percentage of vitamin A, K, C in each leaf in terms of vitamins.

The calories are about 15 kJ calories in 85g of serving, while the fat is 0 and carbohydrate is just 3 grams. Given those facts, escarole is a perfect choice for those who are seeking a diet.

Also, the plant contains iron, folate, zinc, and copper, which is good for fostering the immune system. For women going through cramps, escarole is a great food choice to provide iron to the blood.

Top 8 Escarole Substitutes That You Should Know

Among many escarole lettuce substitutes, radicchio is the best choice. Let’s see how similar these two are.

First, radicchio and escarole share the same texture. They both belong to the burgundy leaves clan with white ribs in the middle.

Besides, the “branches” of these two are both thick and rough. The radicchio tastes quite bland, but it also means that we can use it with any other seasonings and ingredients.

However, the radicchio has a slightly bitter taste for some rare cases, which is so suitable to zest up in pasta, pizza, or stews. You can also toast it raw in salads as the flavor will be more amazing than you could expect.

Typically, the radicchio is widely used in green salads, soup, or bread. Its juiciness and nutritional abundance complement the overall flavor of the dish.

Mustard greens are another great replacement for escarole on the list. Typically, mustard greens and kale are close “relatives,” which means that they share many similarities.

However, the taste is not significantly spicy, so please don’t worry that its taste will be too much to handle.

Given that fact, we suggest you not eat mustard greens raw. The bitter and pungent flavor may not be so comfortable to experience for some people.

You may wonder which is the best cooking method for mustard greens? In our opinion, dipping the plant in hot water, like boiling, or steaming are the two best ways.

Sauteeing is also a great choice in case you prefer the fatty taste.

The title “The most popular vegetable on this list” must belong to spinach. Because of the abundance in nutrition and affordability, spinach has always been the top choice for daily meals, especially for kids.

How could spinach become this endive substitute, to be honest? The answer lies in their similarity in flavor. Spinach and escarole are both famous for the bland taste and juicy texture.

They also have thick branches. In other words, the escarole and spinach provide an almost similar culinary experience.

Another reason why mothers love spinach is its versatility. This green can be used as a substitute for escarole in soup, to toss with salad, or to bake as you like. However, when overcooking this plant, the leaves may get a bit bitter.

Kale is becoming more and more popular on social media nowadays for being promoted as a “superfood”.

People praise it as the “best greens for good health” as it contains the idealist mineral amount that complements health.

Letting its nutrition facts aside, how does the kale taste? Well, based on our experience, the kale is significantly bitter. The greener they are, the more uncomfortable it tastes.

In oriental medicine, bitterness is the best flavor for health as it cools the general body system.

Therefore, we believe that kale, even though the taste is slightly different from escarole, still deserves a slot on the escarole alternative list.

Suppose that you cannot endure the bitterness; try to find the curly kale. This kale type is more peppery than bitter, but it seems quite hard to find in markets.

Therefore, what is the best way to cook escarole? In our opinion, kale works best when it is raw. You should just keep the greens as it is, wash it carefully to remove insecticide, and grind it with a juicer.

Then, without any sugar or seasonings added, drink it immediately. The kale serves the most authentic and fresh flavor then, with full nutrition.

For Italian cuisine lovers, arugula may not be a strange name anymore. This plant is famous for the spicy and intense flavor, which is so suitable for most Italian dishes.

Typically, the arugula is a great source of complement to salads, sauteed vegetables, and spaghetti. Its peppery flavor, combined with the fatness of those mentioned ingredients, balances the dish’s general taste.

The reason why we select arugula as a substitution for escarole is simple: their taste is the same.

The escarole provides a slightly bitter taste when raw, and the arugula has the same feature. They can be used interchangeably in cooking without any problem.

Chard, or Leaf Beet, Swiss Chard, is another Italian cuisine ingredient on this list. However, different from the arugula, chard has the signature fleshy, tender, thick texture, making it hard to cook.

The most compatible combination of chard is with risotto, pizza, or spaghetti. Chard’s slightly bitter flavor and thick structure complement those noodles to make the perfect balance dishes.

In short, the chard is considered as an appropriate escarole replacement for the slightly bitter taste, fleshy and thick composition. However, it takes longer to cook than other leafy greens.

Frisee and escarole share the same structure: leafy, curly, and frizzy leaves. Besides, they also come from the same family clan, which means that the texture and flavor may be similar.

Differentiate from other leafy greens, this fancy-named frisée has a crisp texture and mildly bitter flavor.

That being said, this curled endive can be used in salads, soups, sauteing, and boiling dishes. It is easy to mix, easy to buy in stores, and cheap, too.

Besides, do you know that frisée is the only compatible plant with poached eggs? We have tried many other vegetables, but curled endive is the one that complements best.

Therefore, we suggest you buy lots of curled endive at home already, so that you can not only use them as a substitute for escarole but also cook with poached eggs.

Besides kale, romaine lettuce is another “superfood” on this list. The lettuce is widely known for containing high amounts of vitamin A, K, C, and folate. It is a top choice for those who are looking for a healthier diet.

So, how does the romaine lettuce taste? Like other leafy greens, this lettuce type is crunchy and crispy at first bite and mildly bitter after hand.

The composition of romaine lettuce is like the escarole: dark green leaves with white rib in the center.

We suggest using romaine lettuce in soups and boiling dishes rather than frying or sauteing, as lettuce leaves seem to absorb more oils than other greens.

And the oil-absorbed leaves taste horrible; you can imagine such a case, right?

We have discussed the top 8 best escarole substitutes that you should know. Each plant has its strengths and weaknesses, so please research carefully before using them for your meal.

Among those eight plants, we prefer the radicchio most for the compatibility between radicchio and escarole.

The radicchio can also complement any ingredient, making it available for a wider range of recipes. Wish you have the right choice, and enjoy your meal!