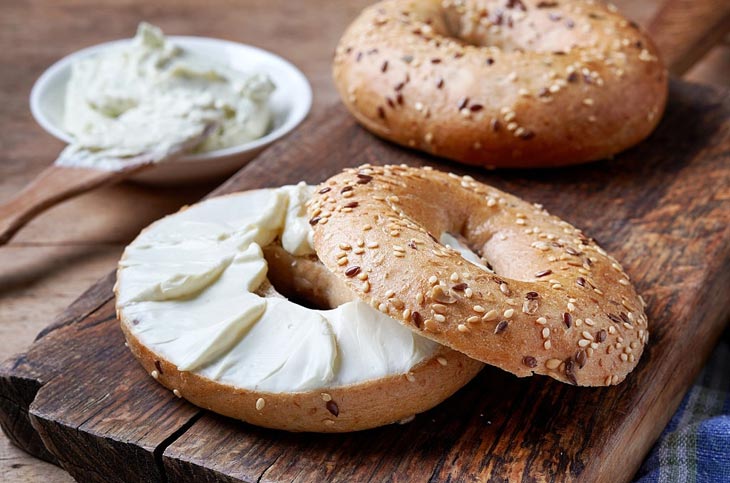 Fromage frais is a type of fresh cheese that originated in France. It is similar to American-style cream cheese, but it is softer and more spreadable, and it has a slightly tangy flavor. Fromage frais is made from cow’s milk, and it is often flavored with herbs, fruits, or other ingredients. It is commonly used in cooking, as a spread on bread or crackers, or as a base for dips and sauces.

Unlike many other types of cheese, fromage frais is not aged and is intended to be consumed soon after it is made. It is typically sold in small tubs or containers, and it should be kept refrigerated until it is ready to be used. Fromage frais is a versatile and delicious ingredient that can add flavor and creaminess to a variety of dishes.

However, what if your recipe calls for fromage frais, and you can’t find it (likely), or you’ve just run out? We explore some common fromage frais alternatives below.

Before getting into the topic, we must understand how Fromage frais tastes. In short, like the name “white soft cheese,” the Fromage is very delicate and smooth, just like the tofu.

At first chew, you will find it impressively creamy. Originated from whole milk and cream, the Fromage also provides a strong fatty and sugary taste.

Compared to cream cheese, it is less fat, but the fattiness is still significant.

The first choice is the fruche, which is famous for its vanilla-flavored sweetness. Besides the vanilla taste, what makes the fruche compatible as a Fromage frais alternative is its fruit components.

In Europe, the fruche is considered a variant of Fromage frais for its similarity in flavor. You will be pleased by its mild sugariness from the first chew, along with the soft, smooth texture and the fruit aroma.

Especially, the fruche is 97% fat-free, gluten-free, and using real fruits to make it. Thus, it is tasty, healthy, and easy to eat.

The cottage cheese is usually used interchangeably with the Fromage frais for their closeness in taste. In short, they are both creamy, watery, and mildly sweet.

Originally, cottage cheese was made from skim milk – the same ingredient as Fromage.

That is the reason why they have similar flavors and smells. To add in, the cottage cheese also has a low fat percent – only 4 percent for a serving.

Compared to the Fromage frais, the cottage cheese has a rougher texture but not significant. The cream from Fromage is also processed until smoother and out of lumps, unlike the cottage.

For the taste, we see that the cottage cheese is  as sweet and creamy as the Fromage blanc.

You may consider greek yogurt as a Fromage blanc alternative since its texture is identical to the Fromage.

We know that there may be a question that popped up “The yogurt and Fromage frais do not taste the same, how could we use them interchangeably?”. Well, let us clarify for you below.

In terms of texture, the greek yogurt is perfectly akin to Fromage frais – soft, smooth, watery, and most importantly, thick. The Fromage is thick, and the thickness of the yogurt matches it!

Now let us talk about the taste – what you may confuse. The Fromage frais is mildly sweet and creamy, while the yogurt is quite “bland.”

So, if the Fromage frais recipes you are doing don’t demand much sweetness, or you don’t want to eat sugary meals anymore, then the greek yogurt is a good match as a Fromage blanc substitute.

Otherwise, if you desire a sweet taste in the dish, then let’s move to the next option – plain yogurt – which is much more suitable as a substitute.

The plain yogurt shares a similar texture to the Fromage frais and the Greek yogurt.

Well, every yogurt type has a soft, watery, and smooth texture, right? So, basically, most yogurt can be used as a Fromage frais substitute.

However, we believe that plain yogurt is better to replace in more Fromage blanc uses. It is mildly but comfortably sweet with a slight fruit-flavored smell.

Thus, plain yogurt can complement other ingredients better than the “bland” Greek yogurt.

Well, you should add the cream cheese into the yogurt and blend them. The cream cheese and yogurt are soft and well-blended with other ingredients, so don’t worry that they will be clotted.

With the addition of cream cheese, the yogurt will taste sweeter and creamier. That mixture can work great as a substitute for Fromage blanc.

As we mentioned many times above, the Fromage frais is delicate and juicy, and so is the tofu. The tofu, looking from the appearance, is literally the harder version of the Fromage, right?

Regarding the texture, they are similar. What about the taste? Well, tofu is made from the process of coagulating soy milk into hard curds, so the soy’s taste is the taste of tofu, too.

And soy is famous for its “healthy” sugar-free, fat-free flavor. So does the tofu – it is quite bland.

Despite its taste, tofu is healthy with a high amount of protein and low-fat content. Thus, we recommend you use tofu in cooking.

The yogurt is soft and watery to alternate the Fromage frais in recipes, but sometimes we feel that the yogurt is not sweet and creamy enough.

Then, what should we do? Well, the advice is to add cottage cheese to the yogurt.

So, this is our method to make yogurt-cottage cheese mixture: Add 1 cup of cheese to a cup of nonfat yogurt.

Pour four tablespoons of sugar into the mixture. Then, blend them and use them as substitutes for Fromage blanc.

If the above selections are not good enough for your standards, then we suggest making Fromage frais at home. In fact, it is not that complicated to make this food.

Here is how to make DIY Fromage frais. First, pour whole milk or skim milk into a big pot, put it on the stovetop, and heat slowly for 20 minutes.

Wait until it starts steaming. Please remember, take the milk out of the stove right after it steams, not boiling!

When the milk starts steaming, take the pot out of the stovetop and cool for a few minutes. Adding lemon juice and yogurt. Then, let the pot sit out at room temperature in 10 minutes.

The third step is to turn on the heat, put the pot on the stovetop and bring it to a boil again. Keep heating the mixture until it separates into curds and whey.

Consequently, line the sieve with a towel, and place it over a bowl in the sink. Pour the mixture into the bowl.

Twist the towel tightly, squeeze it hard to exceed the remaining liquid. Finally, season as you like. The Fromage frais is ready to serve.

In short, we have discovered the top 8 Fromage frais alternatives that you should know. Each food has its strength and weakness, and you should base it on your condition to choose the most suitable one for you.

Personally, we prefer tofu most since it is healthy, easy to find in any market with low prices. Besides, it tastes so fresh and watery that it makes us love it so much!

What about you? Which one is the best for you? Share with us your idea!