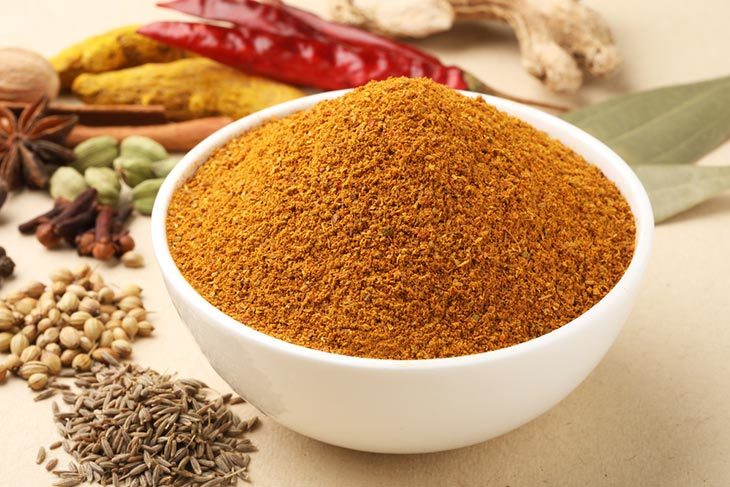 It’s not rare to be halfway through preparing a curry when you realize one of the key components is missing from your cupboard. When it comes to Garam Masala, you could be confused.

While most spice containers only have one spice, garam masala’s complex combination makes it tough to replace. It can even be tough to obtain at first, despite its various uses.

There’s no need to panic if you’ve run out of Garam Masala without noticing it or if you’re unsure what it is and want to have a try. Although a Garam Masala substitute cannot perfectly recreate the taste of your dish, there are several measures you can take. These seasonings will provide the same heat and depth to your food that garam masala does.

What Is Masala Spice?

If you wonder about “what is Garam Masala used for?” – Here is your answer! Garam Masala is a spice combination found in various Indian meals, including lentil dishes, curries, and soups.

Peppercorns, cinnamon, mace, cumin seeds, coriander seeds, and cardamom pods are pounded to a powder after being burnt in a skillet to unleash their distinctive scents. This blend’s name translates to “warming spices,” and it’s intended to increase body temperature and boost metabolism.

There are no one-size-fits-all types of Masala recipes. Rather, the components vary by location and cook. Garam masala will be aromatic and moderate in Northern India, whereas the seasonings will become spicier as you head south in India.

Is Garam Masala The Same As Curry Powder?

Garam Masala or curry powder are both used to enhance and beautify foods. One of the most noticeable distinctions is that garam masala lacks turmeric, which is one of the important components in curry powder and lends a yellow tint to foods.

Garam Masala is typically used as a last seasoning in a meal, mixed in close to the end of the cooking process, whereas curry powder is utilized sooner.

What Is Garam Masala Made Of?

Garam Masala is a spice combination that includes:

What To Use Instead Of Garam Masala?

This section will help you find a thorough answer to the query “what is Garam Masala powder substitute?” Read on to learn more!

When you run out of this spice, the first idea that springs to mind is curry powder – the best sub for Garam Masala powder. It’s possible that you won’t receive the same result as if you used Garam Masala.

You will, nevertheless, be served a great meal. Curry is a popular spice in Indian cooking. Thus, it will go well with several Indian dishes. Feel free to use curry powder in most of your dishes, but adjust to your personal preferences.

Curry powder alters the look of a meal as well. It contains turmeric, which isn’t included in Garam Masala. Turmeric is a bright yellow color that shows up in the final appearance of many dishes. Garam Masala, on the other hand, is a dark brown spice blend. These visual alterations aren’t really significant.

Are you preparing your curry and realizing there are no carrots or broccolis left? Let’s learn substitutions for carrot or broccoli here.

9 Surprising Substitute For Carrots In Your Keto Diet

Garam Masala’s flavor can be approximated by combining two spices. There are various variants of substitution for Garam Masala, one of which is a mixture of allspice and cumin to make a tasty supper. Such a basic mixture might help you replicate the flavor of Garam Masala. They’re also something that almost every cook has in their pantry!

Cumin and allspice have a similar warming effect as Garam Masala, but it takes a lot less time. It’s quick and easy, plus it saves you a trip to the shop for garam spice.

The key is to strike the correct balance. You’re finished when you combine 1 part cumin with 14 parts allspice. With this proportion, the cumin gains sweetness and fragrance without overpowering the dish’s harmony.

The flavor of allspice is a combination of cinnamon, nutmeg, and clove, hence the name. Its inclusion here provides the meal a flavor profile comparable to that of these separate seasonings.

This combination has a pleasant flavor and may be used in any recipe that calls for garam masala. Because allspice is a blend of several spices, and cumin has a pleasant aroma and sweet taste, your food will be flavorful and tasty.

Chaat Masala is another Garam Masala alternative that originates in Indian dishes. If you don’t have any garam masala on hand, this is the one you should consider.

Preferably, you’ll have used these seasonings before and are familiar with their flavor. As a result, they’re easier to replace. Chaat Masala has a zingy, pleasantly acidic flavor. Warmth and umami add to the sharpness of these notes. If you use Chaat Masala instead of Garam Masala, the food will have a sour flavor and less heat.

In general, it’s a spice mixture that’s a little distinctive from Garam Masala. When replacing, keep in mind that the species used in Chaat Masala produce a sweet and salty flavor.

During the substituting process, use equivalent amounts of chaat masala. Still, it all relies on your food. Certain recipes may take less based on the ingredients used. You can also use chaat masala in vegan stews or other hot sauces.

Chicken Masala is a famous Indian meal that some also use to replicate Garam Masala. It’s a tomato-based sauce with chicken and cream, as well as customary Indian flavors.

It has Garam Masala in its structure, making it an acceptable substitute. The aromas are divine, with a hint of sweetness and earthiness that makes it exceedingly tasty.

Indian butter chicken is another form of marinade that would mix well with your other components than Garam Masala.

People often use yogurt, spices, fresh ginger, lemon juice, and chicken to make it. It tastes similar to tikka masala but isn’t as complicated. Prepare a saporous dinner by using this Garam Masala substitute curry in your meals! One tip is that you can use roasted carrots to bring a healthier sense to this dish.

This robust and savory Sambhar Masala can be a Garam Masala powder replacement in most dishes. In South Indian cuisine, people commonly utilize this sort of seasoning that originates from various spices.

You can always prepare the mixture at home and keep it in a container for later usage. Depending on how you want your dish to taste and scent, substitute exactly the same amount or add more or less.

7. Spices In A Blend – Cloves, Cinnamon, and Fenugreek

Although you can utilize these ingredients separately, a mixture of cloves, cinnamon, and fenugreek can also become a good Garam Masala substitute.

First of all, put each of the ingredients in a pan and heat them up at low temperatures. After that, utilize the blender in order to turn the mixture into a powder.

This blending will surely bring your dish a flavorsome aroma! To be more specific, it is most suitable for dishes of chicken, meat stews, vegetables, and dishes that you cook with Garam Masala.

How To Choose A Garam Masala Substitute?

It’s always better to select pre-ground spices rather than whole spices that need to be ground. A great garam masala recipe combines sweet, spicy, and savory flavors. Thus, adding the same amount of curry powder to a recipe as garam masala is the most straightforward replacement.

When selecting alternative spices, ensure they are in modest quantities and date so you can utilize them freshly. When substituting, take it slowly as spices are difficult to remove once added to a recipe. Putting half the amount to the dish, mixing it in, then tasting it is a decent rule of thumb.

Note that you may always modify the components to suit your tastes or what you have on hand. So, the very next time you’re feeling brave and you’re out of garam masala, try this recipe! It’s simple and quick.

While it’s difficult to replicate the exact aroma of Garam Masala, a creative domestic cook has a lot of possible Garam Masala substitute for simulating its effects. If you’re running low on this delicious curry mixture, don’t be hesitant to think outside the box!

Please feel free to leave any suggestions or queries in the box below!