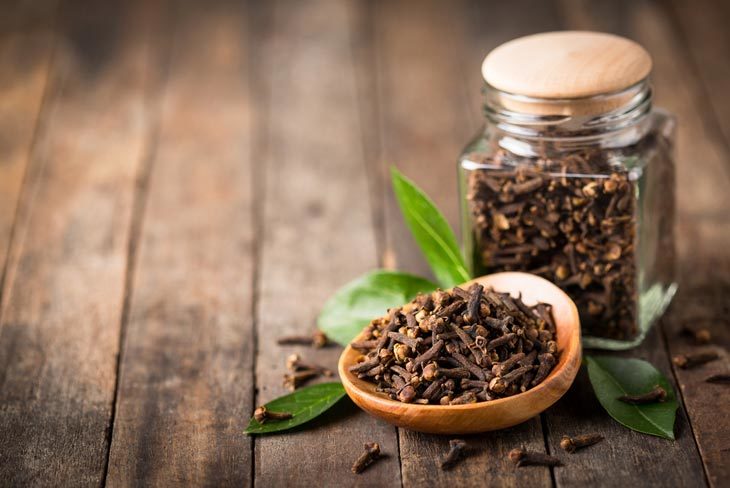 Spice plays an important role in the culinary world. With the addition of spice, any recipe can have an increased surprising and exciting taste.

Clove is a common ingredient in many kitchens. Among many spices like sumac, chili, coriander, pumpkin pie spice, etc., ground clove is distinctive because of its signature aroma.

But what happens if you run out of ground clove? Scroll down to find a ground cloves substitute from our list of 5 alternatives.

Ground Cloves – What Is It, And How It Tastes?

First, let’s find out more about cloves. They are the fruit harvested from the evergreen tree’s flower buds with a strong and spicy taste.

Clove fruit has a reddish-brown spike with a one-centimeter bulbous top judging from the outside. At first glance (or may we say, first sniff), the clove is super distinguishable because of its smell.

In terms of flavor, cloves provide a special pungent, peppery supplement to the food. Cloves could also be chewy, thick, and eye-tearing.

Compared to other spices, this condiment may not be the spiciest, but it must be the most pungent one. Such special flavor makes it a most-preferred aromatic flavor when making pumpkin pie spice by most chefs.

Besides, cloves can be used in two main ways: ground or whole. People can cut the full clove buds into small arugulas and smash them, encouraging the juice to flow out and absorb into the ingredients.

As its name would suggest, ground cloves are cloves that were finely ground into fine powder. In this form, cloves’ spice blend remains the fruit’s original spicy taste, but its texture now changes from thick, chewy to ground.

Ground cloves will deliver a spicy, warm, sharp and a bit of sweet flavor to any dish. So if you run out of ground clove, it may be hard to replicate the flavor it gives.

Let use other ingredient alternatives such as allspice, nutmeg, mace, cinnamon, or Cardamom. Because they are the same flavor and equal amount with ground cloves in every dish.

Let’s explain to you in detail why we can use them.

Allspice is the most compatible as a ground cloves substitute on the list. Theoretically, allspice berries are the ground extraction of dried berries from myrtle evergreen tree in Jamaica.

What makes the ground allspice distinctive is its taste. Even only made up of only one fruit – allspice berries, its aroma is a spice mixture, hence the name.

You can feel a bit of chili’s herbal scent, black peppery scent of cumin spice, and sweet notes of clove and cinnamon. Thus, allspice is a suitable “recipe calls” for almost any spicy ingredient, especially for sweet dishes.

Based on our experience, the taste of allspice is indistinguishably similar to the flavor of cloves. Hence, if you want to use allspice as a clove substitute, replace cloves with the same ground allspice portion.﻿

The allspice is common in the Caribbean, Middle Eastern, and Latin American cuisines. Its strong, pungent, warm flavor is so compatible with the extremely spicy dishes of these regions.

Cinnamon is another potential substitute for ground cloves on the list. This seasoning is highly recommended if you want to add a herbal, spicy taste to the food.

What is cinnamon, anyway? Cinnamon is the warm spice that originates from the inner bark of the Cinnamomum trees. Dated back from the Ancient Egypt era, royals used this fruit to enhance their health because of its high nutrition level.

Cinnamon is made by peeling the cinnamon trees’ stems, extracting the woody parts, then drying and striping into pieces. Thus, the cinnamon’s texture is thick, earthy, and herbal.

You can only use cinnamon sticks to season recipes that don’t need the seasonings to be blended or fully ground.

So, how compatible is cinnamon as a substitute for cloves? Based on our experience, even though they both share a spicy flavor, cinnamon isn’t as pungent as cloves.

Meanwhile, cinnamon has a stronger herbal scent than cloves. As a result, you may want to use more cinnamon to replace the number of cloves used typically. For instance, two teaspoons of ground cinnamon to one cup of cloves. Please consider this point.

The cinnamon is mildly sweet and spicy in terms of taste, making it suitable for people who cannot tolerate the intense spiciness.

To add-in, its signature aroma makes it suitable for adding the uniqueness to baking recipes. On the contrary, the cloves are purely spicy.

Nutmeg is the spice that originated from the tropical evergreen tree named Myristica fragrans. This tree family is mostly found in Southeast Asian countries and the West Indies, thanks to the tropical climate.

Regarding the flavor profile, ground nutmeg provides a slight sweetness mixed with spiciness. What makes the nutmeg distinctive is its half-sweet, half-spicy aroma, making it a suitable substitute for cloves, even for children or people with low spiciness tolerance.

However, the nutmeg is a fruit with a thick and crunchy pith, so it may not work well in some recipes that demand blended or ground spices.

The ground nutmeg catches people’s attention for its signature pungent but satisfying aroma even from far away. With such an advantage, you can use the nutmeg to provoke the alluring fragrance of any dish.

Here are all the steps until you can finally get your hands on the precious mace: first, harvest the nutmeg fruit, take out all the seeds. Then, dry them in the oven and wait until they are fully dehydrated.

Lastly, coat them with dried lacy, and what you receive is the yellowish-brown spice called mace.

Typically, mace is widely applied in most cuisines. The reason behind this preference is the condiment’s taste. Without a doubt, this seasoning has a mildly sweet and spicy flavor from its origin, nutmeg.

Besides, mace tastes quite peppery with a herbal smell when it reaches its growing peak. Hence, the food is satisfyingly smelled, moderately tasted, and easy to find in any store. And you can see the reason they are so common, right?

As you can see, nutmeg mainly provides the sweetness, but the pungent feeling doesn’t overshadow as cloves do. Hence, if you use nutmeg in cooking, you may want to use the ratio of 2:1 – ground nutmeg to cloves.

There are two types of mace on the market: ground and whole. Most people like using entire maces because ground mace might slightly lose its signature taste after the grinding process.

Cardamom may not be the most popular seasoning, but that doesn’t mean the condiment is not distinguished enough. The cardamom is truly a “hidden gem,” to which most first-time users will come back after their first experience.

What is cardamom? This seasoning originates from the seed pods of a variety of plants from the ginger family trees. That being said, cardamom is the perfect substitute for cloves, since ginger and cloves are quite similar in flavor.

To be specific, cardamom is pungently spicy but has no significant fragrance. For better illustration, imagine the taste of ginger, and then draw the ginger seeds’ scenery – and that’s cardamom.

We could see gloves overshadow cardamom for the pungent, spicy taste compared to the gloves and ginger’s spiciness. So, you may want to use 2 or 3 times extra ground ginger to the normal portion of cloves.

The cardamom compliments the food with its smoky aroma and juiciness. There are three main types of cardamom: black, green, and white. They are quite similar, except for the difference in terms of the spiciness levels.