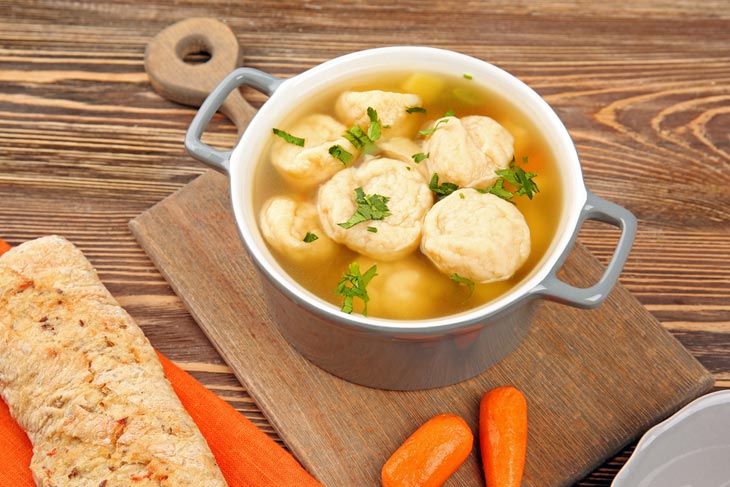 Below, you’ll learn more about how to thicken up chicken and dumplings.

Let’s start first by learning more about what chicken and dumplings in before we get into the seven best ways to thicken it.

The origin of chicken and dumplings started as a common comfort food found in the Midwestern and Southern United States, but some say it started even earlier than that.

According to Southern Eats “Dumplings, or dumpling-like foods, have been around, and served with stewed meat of some kind, for centuries”

For modern variations, people sometimes cook chicken and dumplings without chicken broth. They use chicken broth substitutes for this dish instead.

You can always add various herb additions such as chives, thyme, and parsley.

How To Thicken Chicken And Dumplings

Do you love creamy chicken soup? The following is a list of 7 different approaches to make old-fashioned chicken and dumplings thicker.

1. Blending A Part Or All Of It

Like other chicken stock with vegetables, the chicken, and dumplings thick gravy should be sieved. You pour a part of the ingredients into the broth and mix them well.

Then, you stir the remaining ingredients. The process of mixing should keep going until the soup becomes thicker.

Blend a third of the entire ingredients with the broth, then stir the rest. Otherwise, you can use a potato masher to do the same by mashing them directly in the pan until the thickness of the soup reaches the level you want.

Starchy ingredients like beans, rice, potatoes, or pasta can also work with this. You can mix the soup with meat in the same way, but remember to remove all bones and break the fibers up using a forceful blender.

For a better flavor, we also suggest adding a blend of poultry seasoning. Besides, things such as onion powder and garlic powder are not bad ideas.

Adding cream brings out a creamy, thicker, or blended soup, and mixing the chicken and dumplings with a spoon of thick yogurt can result in an even thicker outcome.

But it may split if you boil the soup after you have stirred in the yogurt and or cream.

With the traditional chicken and dumplings recipe, you also can add cornflour or purpose flour to thicken the pot of simmer chicken.

We recommend using a tbsp of flour for each medium bowl of soup and mixing them well. As a result, you will receive a smooth soup thanks to the flour mixture.

It is best if you mix the flour with some water first to dissolve evenly. Then, the soup should need to be in the process of simmering at medium-high heat for several minutes.

There is a combination called the beurre manié which is a mixture of flour and butter. It can help you thicken the soup quickly.

The recipe includes 2 tbsp of melted butter (or unsalted butter) and 2 tbsp of flour for a medium bowl of soup. While simmering, you add this paste into the soup.

You can tear bread into pieces and toss them into the soup to thicken it. It’s recommended to use bread with a milder flavor to maintain the taste of the soup, or you can replace it with a sourdough for a stronger flavor.

First, soak those bread pieces to soften them and ease the blending process. If you do it right, bread will add more body to the soup without changing the flavor.

Blended rice and lentils can bring more thickness to a soup as well. Red lentils shine if the chicken soup comes with tomatoes.

Meanwhile, rice can be used when you add a vegetable in the soup. Cook rice or lentils until they are tender, mix them into the liquid.

Step 1: Add homemade dough of dumplings to the pot and cook through. You should cook dumplings all the way through. The chicken and dumplings may end up too thick if you were to add thickening dry ingredients before this step.

Step 2: Stir together cornstarch and regular milk and remember to dissolve cornstarch thoroughly to avoid lumps during the cooking time. This step makes sure the slurry works the magic, while the chicken and dumplings won’t get lumpy.

Step 3: Add the cornstarch mixture to the soup, then stir. After that, boil the chicken and dumplings for at least one minute. Stir the food when they boil so that they don’t burn on the bottom.

Step 4: Remove from heat and allow to cool slightly. Subsequently, the entire mixture will get thicker a little when it cools. Stir the chicken and dumplings one more time and serve.