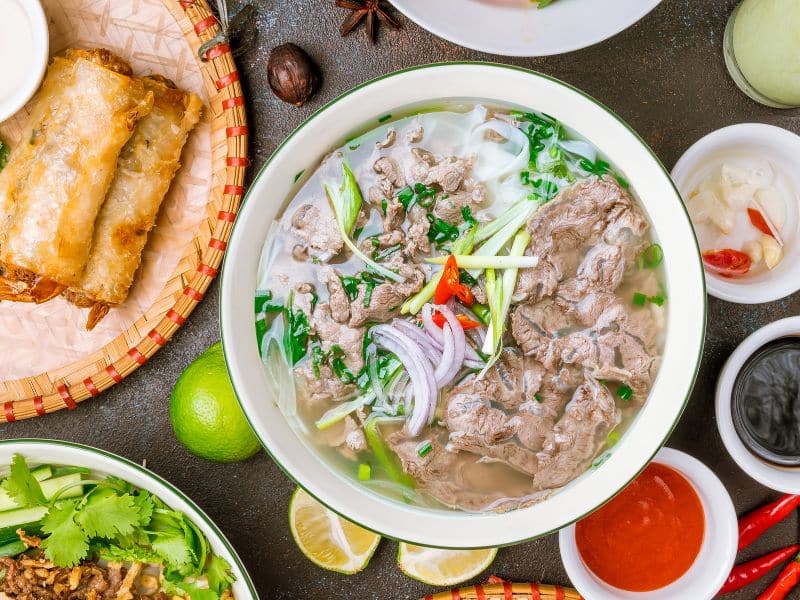 Pho is one of those dishes that can be adapted to fit any taste, and that’s why it’s such a popular choice for a quick and easy meal.

Whether you want a mild or bold flavor or a different type of noodle, the choice is yours. The best part is that there are plenty of great noodles to choose from.

Scroll on down to learn about the 10 best noodles for pho.

Pho is a Vietnamese noodle soup that is typically made with bone broth, rice noodles, and thinly sliced meat (usually beef), tendon and tripe.

The broth is spiced with star anise, cardamom, cloves, and cinnamon, and it often features slices of ginger and onions

Pho can be served cold or hot, with rice noodles or rice vermicelli as the mainstay.

What Are The Best Noodles for Pho?

There are plenty of great noodles to pick from when making pho – depending on your preference and taste. It’s important to note that not all types of noodles are created equal – some are more starchy than others, which will affect the overall flavor and texture of the soup.

To make the perfect bowl of pho, you’ll want to experiment with different noodles. Scroll on down to find what noodles are in pho and in my opinion the 10 best noodles for pho broth.

Rice noodles are the classic noodle for pho, and they are the most popular type of noodle in Vietnam. They are firm and have a nice texture. They absorb the flavors of the broth and are perfect for those who want a rich and hearty meal.

Udon noodles are a type of Japanese noodle that is often used in soups and other dishes that can be flat or round. They’re characterized by their doughy texture and a slightly chewy bite. They are a classic noodle option for pho, and they hold their shape well, which is perfect for slurping up broth and vegetables.

Soba noodles are made from buckwheat flour, which gives them a slightly bitter flavor and a firm texture. They’re perfect for those who want a light bowl of pho – perfect for filling up on toppings like beef, chicken, and shrimp.

If you’re looking for a noodle with a bit of a punch, try ramen noodles. They’re hearty and have a complex flavor that’ll add a lot of depth to your pho. Ramen noodles are among the most popular types of noodles for pho – partly because they have a hearty but not overpowering flavor, and partly because they cook quickly in the broth.

You can also add different toppings to ramen – including fatty meats, vegetables, and even eggs – to create an endless variety of bowls.

Wonton noodles are thin and egg-rich, making them perfect for adding a bit of crunch to your pho. They’re also a bit chewy, which gives them a unique texture that’s hard to find in other types of noodles. Wonton noodles are perfect for those who want something lighter and more refreshing than a traditional bowl of pho.

Egg noodles are a great option if you’re looking for something that’ll be light and fluffy. They also have a delicate flavor that’ll compliment most pho flavors.

A spaghetti noodle is made from durum wheat and is a noodle that is a little more sturdy. They’re also a good option if you’re looking for something that’ll hold up well to lots of broth and spices.

Fusilli noodles are a classic noodle option for pho, and for good reason. They’re sturdy and hold their shape well, which makes them perfect for slurping up the broth and vegetables.

This easy to make homemade recipe for pho is perfect as a warm meal on a cold day. Get the recipe to make a bowl of pho today! Vietnamese Pho

If you’ve never had pho before, this recipe is a great introduction. Get the recipe and video tutorial to learn how to make pho! Quick Chicken Pho

Is Pho Made with Beef or Chicken?

How to Cook Pho Noodles?

There are two ways to cook pho noodles that work best.