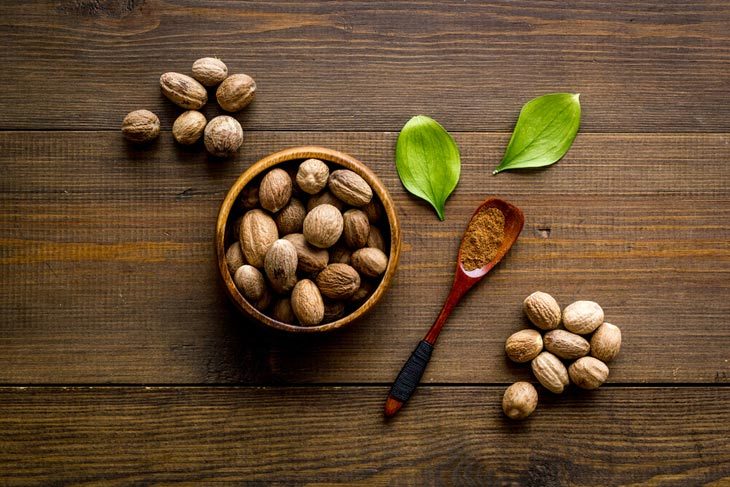 Nutmeg plays as a rich-in flavor spice that boosts the taste of your dish. This ingredient is also beneficial to add a sense of decorative pattern to your food.

Despite being crucial for your cooking, this ingredient isn’t readily available all the time. We would like to give you the optimal nutmeg substitute in this article.

A native Indonesian plant called nutmeg tree or Myristica Fragrant releases its fruit. Then, people extracted the nut-like and round seed from the fruit. The seed is the raw form of the spice you use as additives to your cooking.

This unprocessed seed contains two primary constituents: mace-the red substance covering the outer of the nut, and nutmeg- the seed found inside the nut. Here is also the answer to many people’s questions “How are nutmeg vs mace different from each other?”

You have to spend at least 6 weeks drying the raw seeds under direct sunlight from the harvesting stage to when you apply this ingredient to your food.

Once the seeds absorb enough heat, their kernel will detach from the hard outer coating. You can easily spot this change when shaking the seed due to the rattle coming from the kernels. Next, remove the outside red mace. To use this ingredient as a spice, you can grind its dried seeds to powder or just keep utilizing the whole nut form.

When thinking of an alternative to nutmeg, mace will always be the top choice. Why? Since this ingredient is the outer layer of the nut, it offers the flavour which is the most similar to nutmeg. Thanks to this excellent similarity, you can add mace’s ratio into your food equal to that of our spice.

Among food ingredients that can be a replacement for nutmeg, cinnamon stands as the note-worthy option. People extract cinnamon from the inside of the Cinnamomum genus tree’s bark. You can find this ingredient at any grocery store in powdered form.

However, you have to be careful when applying cinnamon into cooking because this constituent’s flavor is stronger than that of our spice. For 1 portion of our spice needed, you should replace it with only  ½ portion of cinnamon.

If you haven’t used pumpkin pie spice since the last time you made this dessert, you can leave the spice as a substitute for nutmeg. Interestingly, our nuts, along with ginger, cinnamon, cloves, and allspice, contribute to forming pumpkin pie spice.

Hence, you will find the taste and aroma of nutmeg in the dishes cooked with spice for pumpkin pie. The appropriate ratio of pumpkin pie seasoning, when added to make up for nutmeg, is 1:1.

Naturally, allspice doesn’t contain “all the spice” like the widely recognized assumption. This ground nutmeg substitute is a processed product from the Pimenta dioica berries. Yet, the allspice we use for our daily recipes includes various substances like pepper nutmeg, cinnamon, and juniper peppers.

Due to the appearance of our spice in the composition, allspice will bring the nutmeg flavor into your dish when being added at the same ratio as the nutty seasoning.

What to use instead of nutmeg? We suggest cloves. Cloves are one of the herbs and spices that bring a significantly spicy flavor to your food. For this reason, you should adjust the ratio of cloves to half that of our nutty seasoning.

Especially when you are combining nutmeg and cloves in your dish, don’t add extra cloves if our spice runs out. This action will double the ratio of necessary cloves and make your food over-spicy.

Ginger can’t be a good substitute for nutmeg in making sweet desserts, but it will be an ideal alternative to our spice in processing vegan cuisine and dishes for meat lovers. The ratio for adding ginger instead of the original spice is 1:1.

Cardamom is an indispensable ingredient in chai tea lattes, thanks to its one-of-a-kind taste and aroma. Honestly, opting for cardamom to replace nutmeg will require you to acquire specific cooking skills.

For the most excellent result, we suggest you choose this sub for the original ingredient only when a little amount of nutmeg is needed in your recipe.

Apple pie is a well-known Western cuisine that you may have at least once enjoyed or seen in the media. Like the spice for pumpkin pie, this apple pie spice contains different components, such as nutmeg, cinnamon, allspice, and ginger.

Most apple pie seasoning is cinnamon, so it delivers a strong sense of cinnamon. Therefore, you should add the apple pie spice at the half ratio of the original seasoning.

Indian spices are various, but hardly any of them is the common ingredient for Asian cuisine like Garam Masala. Typically, Garam Masala consists of nutmeg, cloves, cinnamon, peppercorns, cumin, and bay leaves, so it is a spicy additive for cooking.

If you are not used to tasting spicy food, you should apply Garam Masala within the less ratio than needed nutty spice.

How To Choose The Best Substitute For Nutmeg In Cooking?

All of these substitutions for nutmeg above can do great work when you use up all of the nutty spice. But, the effect when applying each of these ingredients will vary due to some reasons. You should focus on these notices to pick the finest substitute for nutmeg in cooking:

How To Make Nutmeg?

Suppose you don’t want to opt for a substitute for nutmeg but would like to process nutmeg on your own. So, here is how to make nutmeg:

There is no need to question the rich-in flavor of this spice in cooking dishes. Don’t worry if you find no nutmeg besides when processing your food. Pick a nutmeg substitute in the list above, and it will make up for the lack of this ingredient.