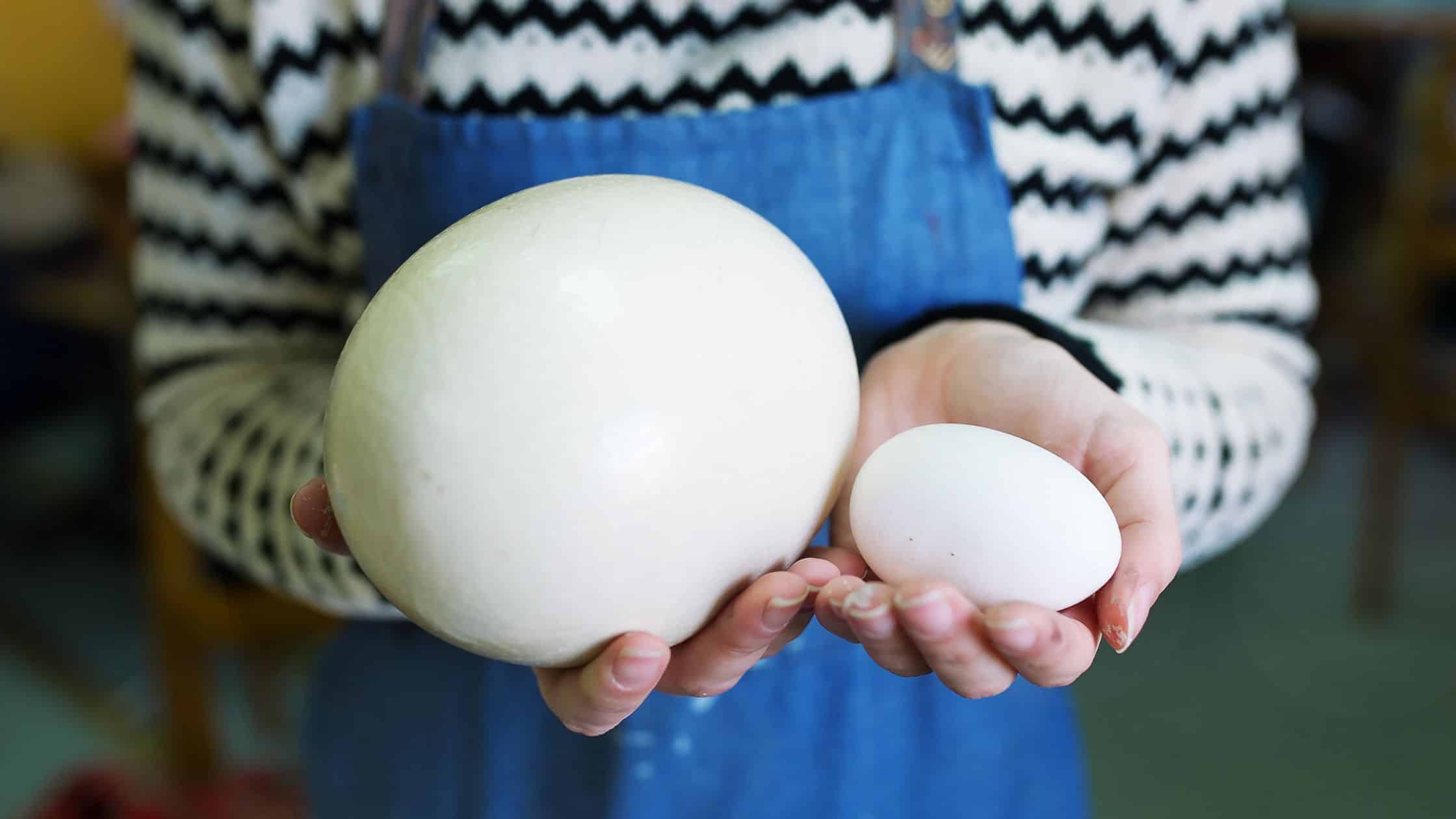 The most popular types of eggs chosen by most people are hen eggs, duck eggs, goose eggs, Emu egg, etc. but what about ostrich eggs?

So, what are ostrich eggs, and how to cook an ostrich egg? Do ostrich eggs taste good? In this post, let’s dive deep into ostrich eggs’ features and recipes to get additional information on this bizarre ingredient.

What Are Ostrich Eggs, And Why Are They Special?

Ostrich eggs have always been called the biggest egg used in the culinary world. Its enormous size and nutritional-rich yolk make it distinctive from other kinds of eggs.

To be specific, a typical ostrich egg weighs about 3 to 5 pounds (1.6 to 2,3 kilograms), with the diameter reaching 6 inches (15 cm). A mother ostrich can only produce 60 eggs per year, so the price of ostrich eggs is higher than other eggs like chicken eggs, duck eggs as those poultries can create limitlessly throughout the year while these birds cannot.

Typically, an ostrich farm needs to wait for 45 days to harvest a fully developed egg. In some cases, if the living environment in the ostrich farm is favorable, the incubation can be shorter, but mostly, it takes time for these birds to produce an egg.

Finally, the ostrich eggshell is so thick and firm that it is hard to crack it yourself with bare hands. People mostly have to use a knife, a spoon, or sharp kitchen tools to do that.

In terms of flavor, the ostrich eggs provide a similar savor to Hen’s eggs. They are sweet, fatty, and buttery, but the ostrich eggs offer a more intense flavor because of its extreme volume.

With these facts given, ostrich eggs are enormous, weighty, and rich in nutrition. However, what about its flavor and fragrance?

In terms of smell, we don’t find the ostrich egg stinky at all. The ostrich egg’s fragrance is so neutral since it smells just like a normal chicken egg.

When cooking, the ostrich egg turns out to be more gelatinous than chicken eggs a bit. The egg white is rubbery and stickier than a normal chicken egg, either.

Breaking down the nutrition facts, ostrich eggs are one of the top nutritional eggs due to the high amount of protein and calories in each egg.

To be specific, an ostrich egg contains more than 100 grams of fat, 2000 mg sodium, 176-gram protein, vitamin A, C, calcium, and iron. In total, for eating one ostrich egg, you have always consumed more than 2000 calories, which is exceptionally high compared to any food.

Given that fact, ostrich eggs are great options for people who are seeking to gain weight because it is nutritional, energy-abundant but does not contain any allergic components.

To add-in, the rich in sodium makes it a good choice for athletics. These ones demand working outside under high heat, which means that they can be dehydrated faster than normal. And the ostrich egg, which contains lots of sodium, is considered a delicious and healthful recipe for these people.

Unlike other eggs, ostrich eggs are quite firm, hard to crack, and voluminous. To help you illustrate better, imagine that when you cook an ostrich egg, you are cooking 24 hen eggs at the same time.

Honestly, the ostrich eggshell is so thick; sometimes, you cannot even crack it yourself but have to resort to the help of a spoon, a hammer, or any sharp kitchen tool to break it.

Here is the guide on how to open an ostrich egg: use a spoon, hammer, or knife for cracking the shell, then make a hole from the top and slightly pour out the egg.

Following this method, you can still keep the cover in nearly full status and use it for further decoration. Let watch these instructions.

After cracking the shell of the ostrich egg, now it’s time to cut the egg’s membrane. The membrane is quite thin and fragile, so it’s better to use a knife or a scissor to puncture it without tearing.

After taking out the membrane, then pour the egg into a large bowl. Place a pan on the cooker, add a small oil drop. Then wait for the pan to warm up.

When you see tiny bubbles are emerging from the bottom to the surface of the oil, it’s time to add the ostrich egg. Please slightly pour the egg into that boiling pan, then wait for a bit for the egg to partly cook.

Turn the egg’s side, and wait again until you see the surface of the egg is thicken and turning into brown-yellowish. Repeat the action of flipping the side until the egg is fully cooked. Finally, please take out the egg and serve it in a big shallow dish as the ostrich egg is much bigger than the normal egg.

Based on our experience, having an omelet ostrich egg with vegetable soup and topped up with mushrooms is the best combination for breakfast. Enough nutrition and vitamins for an energetic day, right?

Like making an omelet with a normal egg, before frying the ostrich egg, you have to carefully crack out its shell by using a spoon or a knife to make a small hole at the top of the egg and pour it out into a small bowl.

However, please be aware not to break the yolk while cracking the shell because the yolk is literally the most important component for a fried egg dish.

Frying an ostrich egg is quite challenging because the ostrich egg is too big, so you don’t know how long and how much oil to use to make the ostrich egg cooked. There is no confirmation on this case, so we suggest using the deepest and biggest skillet and preparing for a significant amount of oil.

After taking the yolk successfully and preparing for the deep pan, then, no more challenge for you, cook this dish like the normal fired hen egg.

First, prepare a skillet, pour oil, and wait until the oil is hot enough by seeing emerging bubbles. Then, pour the egg into the boiling skillet, stir, and flip it until the egg turns yellow, and the surface is thickened.

Luckily for entry-level cooks (like us), the ostrich egg still remains the savor while boiling, so the most common ostrich egg food is just boiling because it is simple and least time-consuming.

When boiling an ostrich egg, there is no need for complicated preparation. Just a pot, water, stove, and ostrich eggs, then the preparation is done (no need to crack the shell first either!).

The procedure is simple: first, add water to the top of the pot, then add eggs and cook it on the stove for 30 minutes to an hour. Then, take the pan out of the flare and wait an hour for the cooked ostrich egg to cool down, and use a spoon to crack the top of the egg as always.

Typically, you boil ostrich eggs to mix with an egg salad recipe, and the quality it creates is amazing: buttery, sweet, fatty, but unique.

There is a famous phrase about the difference between ostrich egg vs chicken egg that is “One ostrich egg equals 24 hen eggs.”. In our opinion, this is a condensed term to compare these two.

In terms of nutrition facts, the ostrich egg preserves more than 2000 calories, making it abundant in fat and protein. Having an ostrich egg offers enough energy for a day.

On the contrary, a chicken egg only contains 155 calories, which means having one chicken egg cannot provide people with enough energy for a day as ostrich ones. However, the chicken eggs are richer in vitamin A, vitamin E, while ostrich eggs are rich in magnesium and iron.

Compared to other eggs, the ostrich ones are considered the biggest eggs used in culinary in the meantime.