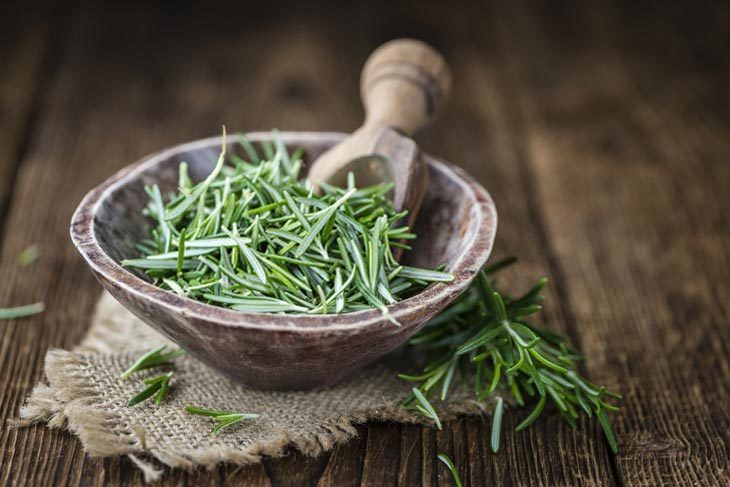 Are you looking for a Rosemary substitute?  First, you should know what Rosemary is! Rosemary (or Rosmarinus officinalis) is a plant species native to the Mediterranean. Also known as “dew of the sea”, it is one of the most widely used culinary herbs around the world, and there is clearly a good reason for that.

Rosemary has long been known to boast incredible nutritional value. Did you know that a branch of Rosemary is as nutritious as a medium-sized apple?

But the main reason the plant is used in almost every kitchen around the world is its complex and distinct flavor that helps improve any dish from soups and stews to roasts or stuffing.

While Rosemary is a popular herb and can be found in most grocery stores, the ingredient may not always be available for use. Some people are also allergic to Rosemary or just straight up dislike the plant’s taste.

This is where having knowledge of suitable Rosemary substitutes can come in quite handy for you.There are actually quite a lot of ways you can replace Rosemary in your dish.

Most of these substitutes are also herbs in nature, so getting a good herb grinder for even more simplicity is never a bad idea. Check out our guide for that here.

Now let us get back to the point. Below is our list of excellent substitutes that more or less contains the same flavors and properties as Rosemary.

Thyme is a part of the mint plant family and also one of the best substitutes for Rosemary. Thyme and Rosemary are pretty similar in appearance as Ill as both having a warm, peppery undertone.

They do have some slight differences, however. While the flavor of Rosemary is very strong and distinctive, Thyme has a very gentle one and blends Ill with any other flavor.

This means Thyme is not only a good substitute for Rosemary but also for other herbs as Ill.

Another advantage of using Thyme as a substitute is its popularity. Like Rosemary, Thyme can be found in almost any grocery store, and are also extremely easy to grow.

Because of Thyme’s lighter flavor, it is recommended that you use it as a substitute when cooking soups, stews or chilly, but anything else will do just fine.

Tarragon, or in this case the French Tarragon, as it is the only Tarragon species to be use in cooking, has a very intense flavor with licorice undertones.

Therefore, it makes a great Rosemary substitute if your dish is lacking some distinctive spice. Originating from Eurasia and North America, the herb has found its way into French cuisine and is a crucial part of the Béarnaise sauce.

While Tarragon is not as popular, when it comes to cooking fresh food such as meats, fish, eggs or poultry, dried Tarragon can easily replace dried Rosemary as it is capable of creating a similarly strong and assertive flavor.

The plant can also be used on soups or stew, but require light-flavored additions such as cheese.

Furthermore, Tarragon has many uses other than being a Rosemary substitute.

The herb can be used to make vinegar and brings plenty of benefits ranging from lowering sugar level in your blood to being an anti-oxidant, so it is never a bad idea to stack up on this awesome plant.

Before thinking of using Savory as a Rosemary substitute, keep in mind that there are actually two Savory variants used in cooking, summer savory and winter savory.

The latter one bears little resemblance to Rosemary with its much bitter and less delicate taste, so make sure the plant you use belongs to the summer counterpart (or Satureja Hortensis).

Summer Savory is used as a traditional herb in Canada, often as mixed with ground pork and other ingredients to create colonnade, which is a meat dressing usually eaten alongside the local poultry.

The herb is also used as a form of anti septic, capable of curing diarrhea and can be found in soaps or toothpastes.

Medicinal uses aside, Summer Savory does its best as a Rosemary substitute when cooking poultry dishes. Savory and Rosemary can also be combined for some spectacular spice.

Of many plants with the same name, the Sage mentioned in this article is going to be Salvia officinalis, a perennial herb and member of the mint family Lamiaceae.

Like Rosemary, Sage can be found mostly in the Mediterranean region, often for both medicinal and culinary uses.

Sage extract has many health benefits, including but not limited to: improving memory, attention/ executive function, alertness and enhancing cognitive performance.

Studies have proven the herb’s effectiveness in fighting Alzheimer’s disease.

Cooking-wise, Sage is similar to Rosemary in creating a strong and distinctive aroma, and is mostly used in a similar way to Summer Savory: for cooking poultry.

Furthermore, the herb can be used in some seafood or meat dish. The herb can be mixed with butter or cheese to further spice up the flavor.

While Sage is a relatively rare herb outside Mediterranean regions, it is definitely worth checking out, especially if you are not fond of other alternatives.

The Caraway plant, also known as meridian fennel or Persian cumin, is a biennial plant of the family Apiceae, found in Istern Asia, Europe, and North Africa.

While the plant itself has little to no use, the Caraway seed is used for many purposes, one of them being a cooking spice.

While their flavor is not as strong as Rosemary, their aroma is undeniable and very long-lasting.

Caraway seed is different from other Rosemary substitutes in that because of their nature being seeds, you usually need no more than a teaspoon to completely spice up a meal.

Caraway seeds have great nutritional value and is best used as a substitute when cooking salads, fish, or stuffing.

Majoram (or Origanun majorana) is, once again, a perennial herb found mostly in cold regions. It is often called SIet Majoram or Knotted Majoram for further distinction from other plants of the Origanum family.

The Majoram herb can be comparable to Thyme in that it has a very gentle and delightful flavor, a suitable substitute for cooking soups, sauces or stews. Majoram can also be added to salads for some excellent dressings.

Majoram is generally considered a healthy herb, containing little sodium or cholesterol, while also boasting great nutritional value. Many people also use it for skincare, as the herb is capable of fighting skin wrinkles or acne.

Bay leaves are often exposed to the sun before cooking to remove the bitterness and strengthen the already strong aroma.

Bay leaves’ taste is quite similar to that of Rosemary but much lighter, so they can be used for a wide variety of dishes, ranging from soups and stews to poultry and meats.

The chemical compound found in Bay leaves are used for many medicinal purposes, but most notably in fighting skin cancer.