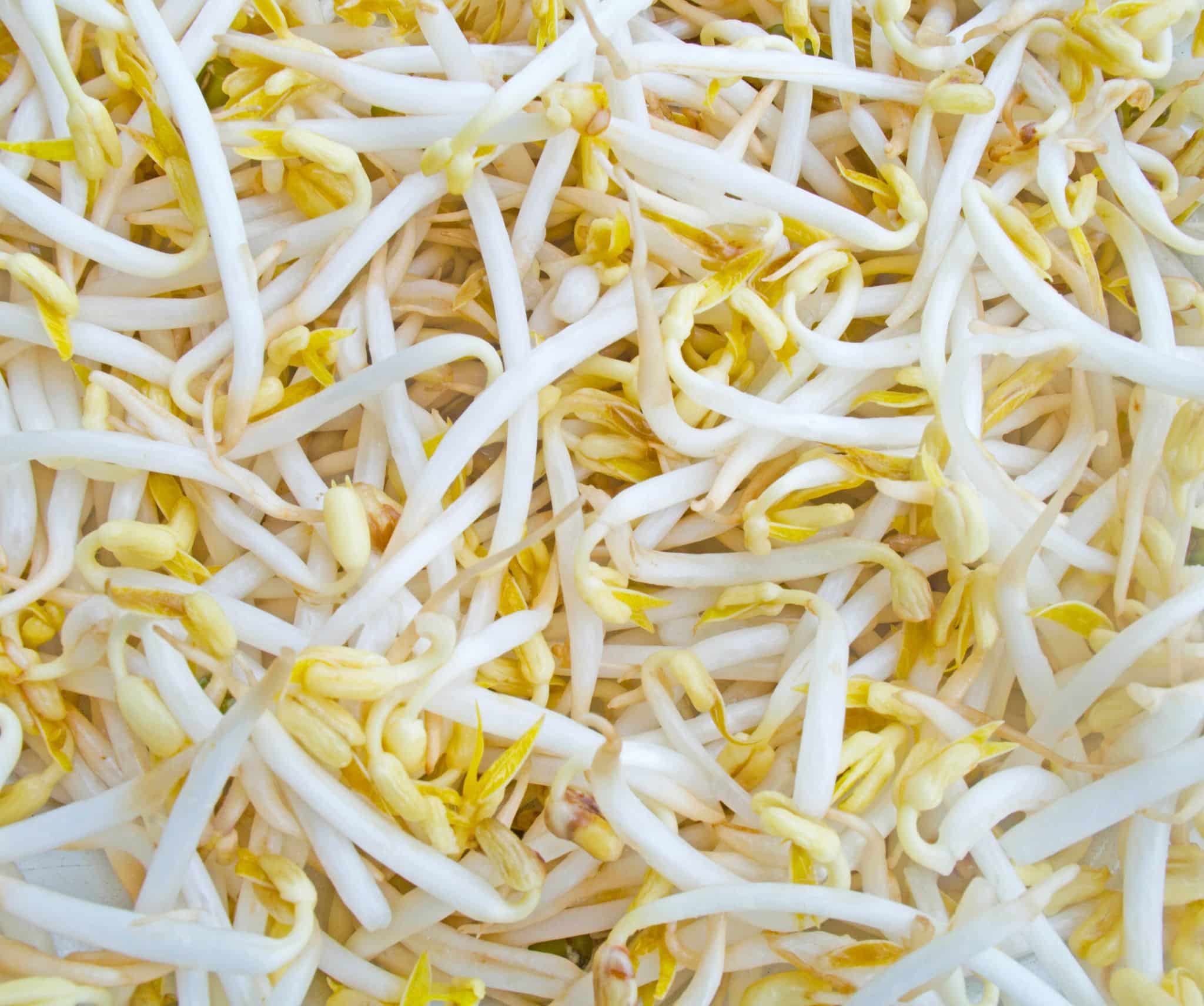 The bean sprout is one of the most widely recommended ingredients because of its fruitiness, healthfulness, and cheapness.

In this post, let’s learn more about mung bean sprouts and learn about the best substitute for bean sprouts if your kitchen lacks these organic sprouts. Let’s start!

Soybean sprouts are the first one on the list. Like mung bean sprouts, soybean sprouts come from the soybean’s fermentation process in a damp environment and are covered with paper towels. Thus, these two greens share many similarities.

Hence, when substituting the soybean sprouts with the mung bean ones, you should spend more time soaking and cooking the food.

Break down the nutrition facts, the soybean sprouts are a healthful and benign choice. The food contains a high amount of water and vitamins like vitamin K, C, A, sodium, copper, and manganese.

To add-in, more than 40% of the nutrition is protein, and 20% is oil, meaning that these organic sprouts are good for young children and teenagers in the puberty process.

However, there is a difference between old and new soybean sprouts. The newer one provides a fresh, juicy taste, while the older one is annoyingly bitter. Please consider this when buying.

The older sprouts are those with long sprout tails, and you should avoid them when making stir-fry dishes because heat and bitterness are not a good combo.

Enoki mushrooms and mung bean sprouts share the same appearance. With a thin, small-cap, and long tail, the enoki mushrooms are excellent for making soup or noodles.

The enoki mushrooms are extremely healthful and benign that they become a top-recommendation food for daily use. On a 100 grams serving, there are 44 calories with 10g carbohydrate, 3-gram fat, and 10-gram protein.

There is no saturated fat, and the only fat elements contained are helpful Omega 3 and 6 fatty acids, though. Choline, folate, and niacin are some minerals that enoki can supply your body with to add-in.

What makes enoki mushroom preferred to most people is its uniquely chewy features. This food provides the same fruity and “bean-alike” taste as the mung bean sprouts.

The enoki mushrooms also have no significant aroma, making them a good garnish to any recipes.

However, this food requires a longer boiling time under hot water than the bean sprouts.

If you don’t spend enough time checking the mushrooms carefully and adjusting the temperature to medium-high heat, it may be so chewy and earthy that you could not eat.

Consequently, the enoki is more suitable for soup recipes because they require a long cooking time, and the enoki can be boiled for long enough to start softening.

The third option on the list is sunflower sprouts. Originating from sunflower seeds, this type of sprout has a similar appearance feature to the mung bean sprouts and alfalfa sprouts.

Comparing the size, sunflower sprouts are bigger than the mung bean sprouts. They are also taller and thicker. So, what about the taste?

Typically, most people think that sunflower sprouts are quite bitter, making them less preferred than other herbs.

If you are in the minority group of people who love the bitter taste, then the sunflower sprouts may be your favorite food.

There are five types of vitamins retained, and other minerals like iron, calcium, copper, manganese are also included.

The sunflower sprouts are mostly used in salads, sandwiches, or smoothies. Its bitter taste makes it hard to eat it alone, but the flavor can be better when mixing with other seasonings.

Snow peas and mung bean sprouts seem to have no similarity between them, but in fact, they have. Do you know that these two plants can be used interchangeably without much difference?

First, what is snow pea, anyway? Snow peas are edible pea pods with long, thin, flat seeds residing inside. When you open a snow pea, there are many small pea seeds inside it.

So, how compatible are the snow peas with the mung bean sprouts? In terms of taste, the snow peas provide a sweet and herbal flavor.

The snow peas’ texture is also crunchier than the sprouts. That being said, the snow peas take longer to cook since they are thicker and bigger.

Snow peas, like other plants on the list, are nutritional. On 100g of serving, there are 42 calories, most of which are carbohydrates (7.6 grams) and sugars (4 grams).

The peas also contain more than 60 milligrams of vitamin C and 200 milligrams of potassium. Hence, this food is suggestive to children and sick people who need supplying vitamins.

Typically, people use snow peas in stews and soups cooked at medium-high heat.

As mentioned above, snow peas are crunchier in texture and have a stronger sweet flavor than the mung bean sprouts, and these features, if added to the stew, soups, or recipes with hot water, will provide the nutty flavor.

Besides, stews require a long cooking time under medium-high heat, which the snow peas also demand.

You may be surprised when seeing green cabbage on this list because cabbage is a vegetable with many big leaves, while fresh bean sprouts are a herb.

However, we can still replace the cabbage with the mung bean sprouts to create a similar flavor.

The cabbage is plain, but that is also why we can substitute the cabbage to mung bean sprouts. In general, the cabbage is fruity and chewy, making it easy to mix and match with any seasonings.

As a result, you can replace the cabbage with the bean sprouts in any recipe, from fry dishes like Banh Xeo, to stir-fry dishes like Kong Namul, without any major change in taste.

However, the cabbage takes more time to prepare than the sprouts because we have to select the fresh bulb, wash them carefully, remove the old strands, sterilize with salt, boil it in hot water and take it out in 1 to 2 minutes to retain the freshness.

Too many preparation steps, right?

If there are no mung bean sprouts, and fortunately, you still have some frozen cabbage in the fridge, you could consider substituting the vegetable for the herb.

The mung bean also called the green gram or munggo, belongs to the legume family that originate mainly in East Asia, Southeast Asia, and the Indian subcontinent.

Mung bean is the vital ingredient in many recipes, savory and sweet dishes, and the most popular bean sprouts form. It often has a slightly sweet, fresh, and nutty flavor.

The cooked mung beans usually combine with grains, vegetables in soups, or ground into powder to use in flat breads, blended with rice and oatmeal to spread rice or bread.

Both mung bean and bean sprouts have quick and delicious cooking time in dips, wraps, soups, and salad.

Can I use canned bean sprouts instead of fresh ones? This simple question sometimes makes us confused, but you totally can use them in that way.

It will give you the same flavor and texture. However, you remember to rinse the canned bean sprouts quickly before making your dish.

It is common in many dishes in Asian cooking. However, nowadays, it can be found in canned form in many regions worldwide.

So are bamboo shoots the same as bean sprouts? Yes, they have the same good crunch and pleasing appearance.

If you are looking for a replacement for bean sprouts, bamboo shoots will be an excellent choice. You slice it thinly and put it in your stir-fry dishes, and then you will have a delicious stir fry.

If you are cooking pad thai, but bean sprouts have run out, what can you substitute for bean sprouts in pad thai?

Do not worry! Using an equal amount of thinly short bok choy will help you solve this problem. Maybe they do not look quite the same, but it will provide a similar textural component.

It often has white or green, thick stems with light or dark green leaves. All bok choy, including branches and leaves, are cooked into a stir-fry, steamed, or boiled.

Bok choy is a kind of quick maturing vegetable with the same cooking time as bean sprouts. Therefore, in every recipe that calls for bean sprouts, use bok choy to replace without any concern.

What Is Bean Sprout, And How Does It Taste?

First, we need to know what mung bean sprouts are. Originated from mung beans, the bean sprout is the product of the germination process of beans.

The mung beans will be nestled in a damp, hot environment for about 2 to 5 days until the beans start nourishing and create a small, delicate plant named sprout.

Typically, people will harvest organic sprouts after such a short period because the small-sized sprouts, the same size as a piece of paper towels, are the best to cook.

In terms of flavor, the mung bean sprouts are juicy, earthy, and neutrally tasted. There is no concise word to describe the sprout because they are just bland, in general.

Given that fact, mung bean sprouts are an excellent garnish for any dish because it can complement the recipe’s juiciness without changing the main ingredient’s taste.

Regarding the texture, mung bean sprouts are extremely delicate. They are five days old plants from the mung beans, growing up in a humid environment while covered with damp paper towels, with a little sunlight and no nutrition.

Thus, these greens are tender and small. However, when the organic sprouts turn ripped, its root tastes crunchy and chewy.

What makes mung bean sprouts so preferred in the culinary world is its benign and easy-to-store features. The food is packed with vitamin A, C, fiber, and iron, most of which are essential to strengthening health.

Besides, mung bean sprouts originate from a nutrition-less and humid environment, meaning that the plants can still thrive in bad conditions.

Hence, there is no need to worry much about storing mung bean sprouts. Just keep bean sprouts in a clean, sterile environment, cover them in damp paper towels, and they will be fresh.

When you have to cook the beans, just rewash them under cool water.