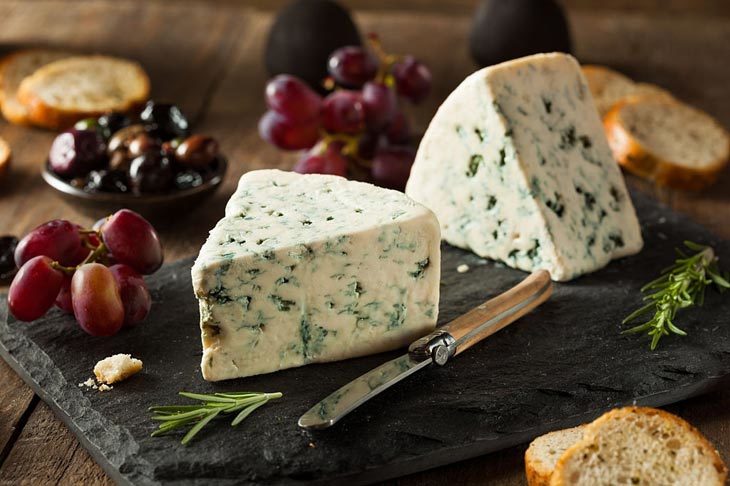 One of the most popular cheeses in the world and can be found in most supermarkets is blue cheese or bleu cheese.

This cheese takes its name for giving a fantastic taste to your salads, sandwiches, and pastas.

As a fan of this type of cheese, I love creating blue cheese dressing recipes. But I know that not all people would love blue cheese in their dish.

So, what is the best substitute for blue cheese if you would rather not use it in your recipes? In this post, I will give you six types of cheese that can replace blue cheese.

Blue cheese is a type of cheese that has a unique look and taste. For those who don’t know about blue cheese, it is a general term for cheese with several blue spots inside due to a special internal mold growth.

Therefore, the taste of blue cheese is also different from other cheese. Every so often, when cooking, we might find ourselves in a situation where some ingredients are missing.

Instead of panicking and looking to buy it, why not take advantage of a substitute for those ingredients?

Here are six types of cheese you can use to substitute for bleu cheese:

Feta cheese is one of the most popular cheeses made in Greece. Starting from the 8th Century B.C, the shepherds have been making blue cheese from pure sheep’s milk, pure goat’s milk, or a mixture of both, consisting of a ratio of 25, 50, or 75% of goat’s milk.

This Greek cheese is granted the protected designation of origin (PDO) product due to its exquisite taste, which only happens when sheep and goats feed on Greece’s unique flora.

Besides, the process of creating Feta is also complicated as the production chamber requires the temperature to be strictly at 18 degrees and more than 85% humidity.

With a delicate process, you need to keep feta cheese properly to avoid the growth of mold.

I can describe this fine cheese similar to blue cheese because of the salty, tangy, mildly acidic, and crumbly taste. You can use Feta for salads, sandwiches, and Mexican dishes.

Gorgonzola is one of the best- selling Italian blue cheese in the world. This cheese also has a long history of serving in the culinary art and was granted as POD in 1996.

Gorgonzola cheese is named after a town in Milan. In 1996, the European Commission granted this cheese a PDO product and can only be produced exclusively in Piedmont and Lombardy, Italy.

This Italian cheese is made with unskimmed pasteurized cow’s milk and still uses the same ingredients and methods as centuries ago to maintain the flavors.

Gorgonzola PDO cheese can also be defined as two pastes due to its unique technique which results in the inconsistency of two curbs and causes the unevenness of mixed paste.

Thus, it has a unique texture of which it is both hard and soft cheese. You can find two types of Gorgonzola with slightly different textures.

Gorgonzola Dolce consists of a soft and creamy taste, while Gorgonzola Piccante is quite chalky and sharp.

With the taste, you can use the Gorgonzola cheese substitute for blue cheese in baking cookies or cooking pastas, pizzas, and risotto recipes.

The fresh cheese was formed by cow and goat milk and denoted with rennet, lemon juice, and vinegar. That’s why it is soft with a slightly salty and tangy taste (similar to blue cheese crumbles).

Due to its crumbliness and melting characteristics, people used this blue cheese substitute for sprinkling

Mexican food such as enchiladas, tacos, elote, and huevos rancheros. You can also use it for fruit salads, Colombian arepas, and Dominican fried cheese.

Unlike old aged cheese, Queso Fresco is possible for you to recreate at home. And you can also mix and change the recipe of this fresh cheese to a vegan edition.

Note: If your dish included vinegar as an ingredient, don’t use this kind of cheese because it will add too much vinegar to the food.

Check out how to make a vegan cheese substitute blue cheese recipe.

Maytag is one of the types of blue cheese which only has 80 years of history.

Frederick L Maytag II made this hand-crafted cheese and Iowa State University in 1941 as a recreation of Roquefort cheese – a favorite type of blue cheese – using the Maytag family Holstein cattle’s milk.

The cheesemakers divide the milk into small batches and add mold spores to remake the green veins.

That makes Maytag blue cheese crumbles holds a standard creamy, moist of the blue cheese, yet with an intense and fruity taste.

If you’re looking for a cheaper version of blue cheese, this Maytag cheese is an excellent option for sprinkling into salads and burgers.

The Roquefort cheese is exclusively produced in the north of rocky areas in Roquefort Sur Soulzon, France.

With a strong, dry north wind constantly blowing through the rocky areas, caves in Roquefort Sur Soulzon are full of mold, which creates a perfect condition for blue cheese.

What makes this blue cheese substitute special is taking 13 liters of sheep’s milk to make a cheese pan. After forming cheese curd, cheese makers will leave the cheese in the cave uncovered for three months.

After the ripening phase, the French cheese will be wrapped in aluminum foil and sent worldwide.

Goat cheese or Chèvre cheese is another cheese made in France. According to the name, this cheese is made from pure goat’s milk, produced in 8 regions in the south of Loire river since the 8th century A.D.

Unlike other cow’s milk, goat’s milk has less protein and higher fatty acids, giving the cheese a more tangy, creamier, and smoother taste making many people think Goat cheese is a cheaper version of Feta but with a slight earthy note.

The process of making this blue cheese substitute is so much simpler than most of the cheese, and therefore, you can make your homemade goat cheese to replace for blue cheese recipes.

Our last substitute cheese came from England in the 12th Century. The name Cheddar cheese is named after Cheddar village with plenty of caves and gorges.

The cheddar making process is quite different as the cheese curds are cut and pressed into slabs repeatedly until the cheese becomes crumbly and dense.

The cheese has a spicy, nutty, and deep flavor, complementing sandwiches, macaroni, and casseroles dishes.

As I have covered the best blue cheese substitute, it is essential to say that no matter how similar these cheeses can be, it cannot replace blue cheese completely due to its perks.

Although the process can sound crazily dangerous as it allows mold to grow inside, blue cheese has many health benefits.

Firstly, the unique cheese has high calcium, which helps enhance bone density and lose weight. Besides, one of the components in blue cheese is spermidine, which reduces heart disease risk.

Throughout the post, you might have noticed that there are many types of blue cheese with different ways of making them that you can replace each other with.

Despite the diversity of blue cheese in the world, there is one thing in common: the cause of their green-blue veins.

As you have known, blue cheese is molded in a period to have blue veins. The mold is called penicillium roqueforti, which are popular in caves.

The cheesemakers can create the blue veins by either monitoring the cheese in these molded caves or add the mold spores into the cheese at a suitable temperature.

The general blue cheese flavors are usually creamy, spicy, mildly salty, tangy, and strong depending on the cheese’s aging time. Blue cheese is great for salads, pasta, and even desserts such as frozen cheesecake and bourbon tart.

There are many types of cheese in the world with different flavors and characteristics. As their nature comes from cow’s or goat’s milk, we can replace one cheese to enhance our dish flavors.

Bleu cheese is a great combination of various dishes because of its complimentary taste. However, like every other cheese, cooks can use a blue cheese alternative to maintain the dish’s flavor.

After learning about the best substitute for blue cheese, I hope you have found the most suitable cheese for your dish.