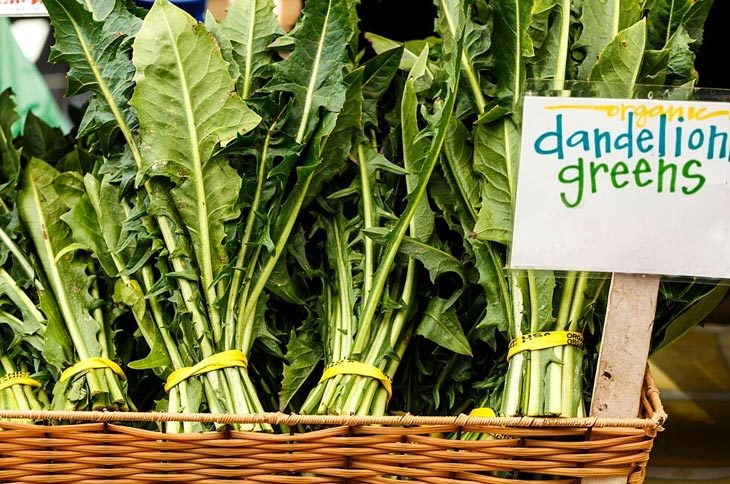 No one can deny the fact that dandelion greens are indispensable food in our daily lives. These healthy green veggies might not always taste good, but they are guaranteed to bring beneficial nutritional value to our bodies.

However, it cannot be easy to buy in the market. So, what is a substitute for dandelion greens when your recipe calls for it? Let’s have a look at our list to see which veggies can help you ensure the dandelion green’s flavor!

Since many of you have not been familiar with “What are dandelion greens?”, let’s look at how they taste.

Dandelion greens’ flavor profile can be described as bitter, nutty with an earthy background, resembling radicchio or endive. The earlier you harvest dandelion greens, the less bitter the leaves are. The bitterness from dandelion greens’ is not like a spoiled taste, but rather a healthy, edible bitter taste that can be decreased when combined with other ingredients.

That’s why chefs usually combine dandelion greens with dairy products such as cheese, bread, milk to lessen its bitterness and with protein such as pork, bacon to highlight its earthy flavor. The best way to cook dandelion greens is by sauteing or braising them with flavorful spices and ingredients.

Although covered with a bitter sense, dandelion leaves are a great source of healthy nutrients, including calcium, vitamin A, K, etc. You can also include these leaves in your healthy smoothie recipe to double the nutrients, besides cooking dandelion greens in savory dishes.

Mustard green’s bitterness will slowly die out when cooked, so it will be an acceptable option for those who cannot stand the pungent smell of mustard. That’s the reason why mustard green can be used as a substitute for brown mustard as well.

Although mustard can be slightly spicier than dandelion greens, it can be a great ingredient in your recipe. You will probably enjoy this dish even more as mustard greens help stimulate the taste buds.

Besides flavor, mustard green also has a fibrous texture with dark green, so you can use this similarity and substitute for dandelions green in color and texture.

Because of the similarities between arugula vs dandelion, people usually wonder: “Are arugula and dandelion greens the same?”

Well, the answer is no. Arugula and dandelions are different, but arugula is a good alternative to dandelion greens. With a slightly bitter and nutty taste in flavor that is highly recommended to substitute for green pepper, arugula can replace dandelion greens in salads, soup, or in any recipe that requires dandelion green’s pungency.

If we compare the bitter level between these two, arugula is less bitter. Thus, you can use some arugula for cooking to bring down the spice.

One thing you must remember about arugula is that it is a fragile veggie. If your recipe calls for cooked arugula, make sure to include it in the final cooking step. Leaving arugula in high heat for too long will break its texture and lose its flavor.

You can cook watercresses as well, but remember not to put them in high temperatures for a long time. For a fast yet delicate garnish, you can saute watercress with basic seasonings like salt, pepper, cumin for a few minutes in olive oil. When you see the leaves shrink, turn off the heat, or else high heat will make the watercress too watery.

Compared to dandelion greens, baby spinach is much easier to find. But in case you cannot find fresh baby spinach, you can also substitute frozen spinach for fresh ones.

Either your recipe calls for raw or cooked dandelion greens, baby spinach can pull off any mission. You can serve raw baby spinach after washing it thoroughly with water and salt. For cooked spinach, toss them in a pan with oil and green peppers to make its flavor reflect dandelions green quite a bit.

Although bearing no similarities in texture to each other, radicchio and dandelion greens have the same flavor profile of being bitter, spicy, and nutty.

So if you want to bring some color into your recipe, consider using radicchio instead of dandelion greens, as the flavor remains the same. Add coleslaw to the radicchio, and you have a splendidly healthy dish to serve you and your family!

Last but not least, one of the dandelion greens alternatives is kale. Kale is bitter and peppery like dandelion greens, making it a great company to accompany recipes requiring dandelion. Although kale is not common in some places, it is fresh, healthy, and versatile in any cooking recipe.

You can eat kale raw and cooked to replace dandelion greens, but remember that raw kale can be too pungent for your dishes. It’s best to cook raw with seasonings and substitute them in the dandelion greens recipe to have the best result.

How To Choose A Dandelion Greens Substitute?

If you want to keep the bitterness, earthy and nutty flavor profile of dandelion greens, you should select mustard greens, endive, radicchio, and kale. These pungent natural greens will reflect the same flavor as dandelion greens in one way or another. Whether an alternative can work effectively in your recipe relies on how you cook it and how well you combine it with other ingredients.

If you want to cut down the bitterness, consider choosing arugula or baby spinach as they have a lightweight-to-not bitter flavor. It would help if you used these veggies for anyone who cannot stand the earthy taste of dandelion greens. Or, if you want to experience the bitterness gradually, grab some watercress and use it in your dishes for gentle, mild spice.