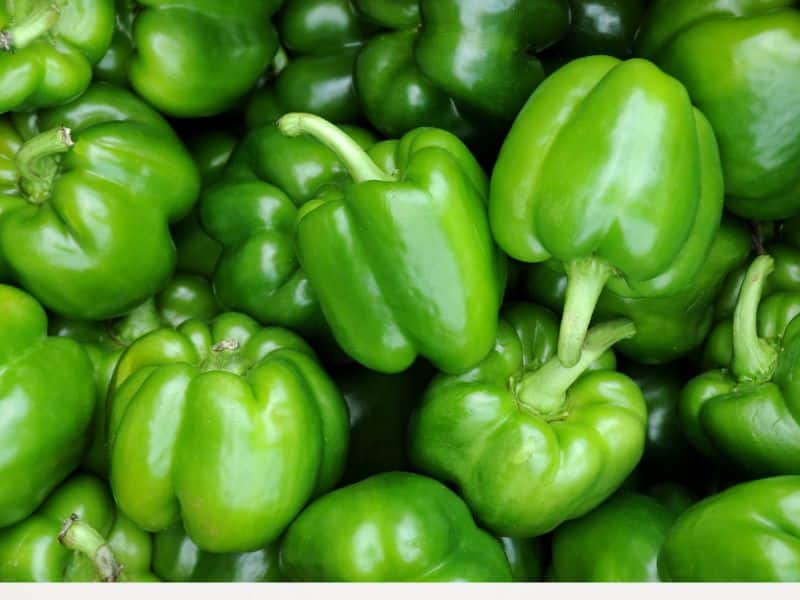 Green peppers or bell peppers are a popular vegetable for many recipes. Their taste is wonderful to pair with a roasted chicken breast, steaks, baked ham, or just a plain salad. However, sometimes you may need to find a substitute for green bell pepper.

So, let’s find out what you can replace in this substitute for green pepper post!

Bell peppers, eggplant, hot peppers, and onions, are a nightshade type of pepper. They belong to a family like hot chili peppers, without the capsaicin-inducing heat. They are also a great source of vitamin A and C, which improve your immune system and antioxidant.

There are different types of bell peppers like red, green, and purple. These color variations are an indication of their flavors. For example, red peppers contain double the vitamin C in green bell peppers with a sweeter flavor.

The green peppers have a mildly sweet, grassy, and bitter flavor, unlike yellow and red pepper bells that are fruitier and sweeter.

Green peppers are a popular ingredient in Basque cuisine. If you’re out of green peppers, take a look at the most suitable bell pepper substitute to complete your dish now.

Green peppers are unripened red peppers, which explains their mildly acidic flavor. Therefore, it is a no-brainer to choose red pepper as a substitute for bell pepper in the recipe.

Red pepper is a popular ingredient in Mediterranean cuisine. The flavor of orange and yellow peppers is combined with the tartness of green bell peppers in red peppers.

Because of the distinctive flavor, these mild peppers are perfect for a variety of foods, including raw, salads, and sandwiches, as well as spicy recipes such as soups, sauces, stews, stir-fries, and casseroles. With their vibrant color, they are ideal for tossing into salads such as this pickled bell pepper salad or corn avocado pepper salad.

Poblanos peppers are sometimes regarded as the perfect substitute for green peppers because they are similar to big green peppers in terms of appearance and flavor.

Poblano peppers have a similar texture to bell peppers. Their shape has thick and meaty flesh, making them ideal for stuffing and replicating well-known recipes that feature green peppers.

Regarding the flavor, poblanos have a deep and grassy taste similar to green peppers but not as sweet as other peppers. Poblanos, like bell peppers, are mildly spicy, but it’s normally a fire that people prefer because it’s not as strong as the famous jalapeno.

Because of these features, many people like to add poblanos too many bell peppers’ recipes. They are becoming more common, making them easier to access grocery stores, usually near the shelf of bell peppers.

Anaheim pepper is named after the city that popularized it, Anaheim, California. It is also commonly referred to as the California chili, as in the 90s, they were brought to southern California.

Like green bell peppers, Anaheim peppers are great for stuffing because of their thick flesh and crunchy enough for roasting recipes but with a somewhat fruity taste.

You can use Anaheim pepper in a wide variety of recipes. Your green pepper dishes can reach the same effects when you use them. Therefore, you may include them in any dish that calls for bell peppers, but Anaheim requires a lower amount of heat than bell peppers.

They can be used to spice stews and soups and sauces as an enhancer for Cajun Holy Trinity or mirepoix. Anaheim pepper is great for eating fresh and combining in canned salsa. If you buy canned green chile, it is common to see Anaheim peppers as the main ingredient. They are sold fresh or frozen, depending on the stores.

Jalapenos is a part of the green chilies family that is extremely spicy; in reality, people know this pepper as a hot chili. So, if you’re looking for a spicier green pepper substitute, this is the one for you!

Regarding the spiciness, on the scale of Scoville heat, the heat of Jalapenos is from 2,500 to 8,000 meters, which has a milder taste than the cayenne pepper (30,000 to 50,000) commonly used in our American style recipes.

Besides that, Jalapenos have a certain relation with bell peppers in terms of the stuffing ability if you have a big jalapeno. The heat of jalapenos might be sensitive to some people, so to reduce the spiciness, you can cut the ribs and pit before use.

Although the seeds do not contribute to the fiery flavor, you can always be careful to remove them.

Sichuan pepper might be the best option for you if you fall into people who can withstand the spiciness. This is an ancient ingredient that has been used for generations in China. It was, in particular, known as a medicinal treatment for stomach ache.

This pepper’s original name is hujio means flower pepper, as it has the shape of a flower seed. However, many people characterize it as a cross between chili pepper and black pepper.

In Chinese cuisine, enhancing the spice’s citrus flavors while amplifying its woody tones is toasted before being grounded or crushed. It has mild heat and a tingling flavor that can be a great substitute for bell peppers.

You can prepare these medium heat chilies to spice your meat or add recipes that green peppers are not the main ingredient. Here are how to prepare Sichuan pepper:

Another great ingredient to add to the list of substitutes for green peppers is Pimientos. They have a heart shape with a sweet taste similar to bell peppers. However, they possess a more aromatic and non-spicy flavor that is great for lower heat tolerance. It can be difficult to find them fresh as they are often sold in storing jars.

The heart-shaped peppers originated from the mountain of the Ashe County town of West Jefferson. Farmers harvest them last summer and arrive around the end of August.

In contrast to the green peppers, the Pimiento texture is tender and thin. Therefore, stuffing recipes are not a good idea to use these peppers. However, for a recipe that requires you to chop bell peppers, this pepper is an ideal replacement.

There are many ways you can use pimiento in cooking. They can use it for sauteing because of their mildly sweet flavor, combining with vegetables for salads, or baking them with ham and cheese.

Cubanelle pepper is an excellent replacement for bell pepper because of the similarities in their texture. Originated in Central and South America, this pepper is famous in many American-style recipes.

However, Cubanelle also has an interesting connection with Italian cuisine due to the Spanish in Europe. Nowadays, most of them are imported into the United States from the Dominican Republic.

The normal size of cubanelle pepper ranges from six to eight inches, with a small curl at the tail. They’re mostly used when they’re bright green, like green peppers, but mature peppers may also be red, orange, or purple, which can be a great substitute for red bell pepper. You can find the mature ones at the end of July.

Regarding the flavor, cubanelle peppers obtain a mild honey-pepper flavor without the grassy note. The spiciness is not as strong as poblano, but it is not as soft as standard sweet peppers either. The Cubanelle’s flesh is slightly thinner than a bell pepper, somewhat similar to Anaheim pepper.

Because of its sweet and spicy flavor, Cubanelle is a popular ingredient to combine with other peppers, garlic, and tomato base. They’re great as a pizza topping or as a salad topper, but they’re also delicious red pepper replacements for recipes demanding chopped bell peppers.

As the moderately thick meat, Cubanelle can still be used for stuffing with meat and other veggies.

If your recipe is heading for a fried effect on your bell peppers, you can actually use onions as a cheap option for replacing bell peppers. When the onion is fried, they have less onion taste and are similar to chopped bell peppers. In addition, the taste will be sweeter than fresh onion.

Similar to the texture of bell peppers, onions also have a crispy and crunchy taste in your mouth. There are many types of onions in the market, such as green onions, shallots, red onions, sweet onions, and white onions. Therefore, it is best to know how to combine them perfectly in different recipes.

For toasted and fried dishes, the sweet taste and crunchy texture of shallots are a great match. If you’re looking for a salad ingredient, you can use red onions, which have a stronger taste than other types of onions. Green peppers are well known in Mexican dishes, and so are onions.

You can use white onions as a bell peppers replacement to enhance your salads or tacos. With the mild taste and crispy texture, they complement other ingredients in the dish very well.

How To Choose Green Pepper?

The skin is a great indication of fresh or old vegetables. For bell peppers, you need to make sure that their skin is thick and solid that can be stuffed. Moreover, their stems have to be green as different colors could show that the fruit is damaged, old or overripe already.

When looking at the skin, you should also look for any cuts, soft and shriveled flesh on the peppers as they are damaged, leading to spoilage.

Another trick to determine whether this green pepper is good for your recipe: finding out its gender.

“What? Bell peppers have genders?”

Yes, they do, and they are quite different in terms of flavor. A female green pepper has more seeds inside and sweeter flesh, while the male has less with a bitter taste. So, if you want to eat bell peppers raw, it is better to choose the female. If you think of cooking them, male peppers will bring an interesting taste to your dishes.

Knowing whether they are male or female, simply looks at the bottom of the pepper. There are several bumps at the end of the peppers. If the fruit is female, there are four bumps and three bumps for males.

1. How to store green pepper?

Green peppers are great ingredients for many of our dishes. Every so often we use a lot of them in salads, and occasionally in sauces and soups. So, for the leftover green peppers, it is best to store them in the fridge or freezer. You can store them similarly to storing bean sprouts.

2. What is the best cubanelle peppers substitute?

You can also find sweet flavored peppers like Anaheim, and banana peppers can substitute for roasted red peppers and Cubanelle.

Green peppers have been a popular ingredient all over the world as a result of the enormous influence of Mexican dishes. With a grassy, bitter and sweet flavor with a mild spicy note, green peppers are versatile for many recipes like stuffing or sautéing with meats and vegetables.

However, we might be in a situation where there are no more green peppers in the store. That’s why finding the perfect substitute for green pepper is a great and economical way to complete your dishes for family dinner or special occasions.