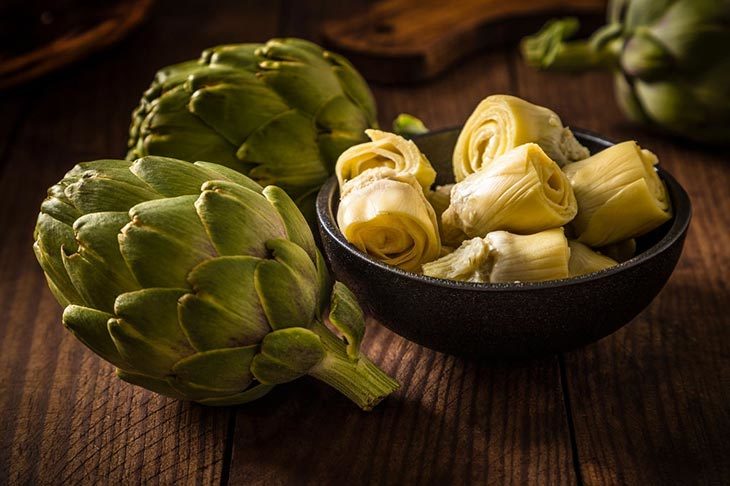 Artichoke hearts are widely used in today’s cooking, especially for healthy recipes because of their medicinal properties. We can steam, fry, or grill the artichokes themselves or take them as a part of many dishes.

The problem is the shelflife of the artichoke is not allow us to keep it for long-term use. What should you do when you need it but run out of them in the cabinet.

Thanks to the mild taste, it’s not hard for us to find substitutes for artichoke hearts. Of course, nothing can replace something else entirely, but they will work in particular aspects.

What Is Artichoke Hearts?

The artichoke heart is known as green artichoke in the U.S. It seems a bud of thistle before coming into bloom is similar to a flower. Nowadays, artichoke is widely used in cooking, they contain health benefits such as increasing ‘Good’ cholesterol, reducing blood pressure, improve liver and digestive health.

Artichoke hearts have a mild nutty flavor (similar taste compare with asparagus and Brussels) and crunchy texture. You can meet artichoke in a lot of salad or soup recipes.

Both the artichoke leaves and heart are edible, however, the artichoke heart is more popular because its taste is delicious and easy to combine with other ingredients in recipes.

Artichoke hearts play different roles in different recipes, from being a topping, thicken agents to the main ingredient. Let’s find out which substitute is suitable for specific functions of artichoke hearts.

People often get confused with this name, but it actually has nothing to do with the artichoke. Instead, this is a variety of sunflower, also called sunchoke, and looks like ginger roots.

Sunchoke has a sweet and nutty flavor which is similar to artichoke hearts. It is rich in iron, fiber, and low saturated fat, which is ideal for a healthy diet.

Its fresh property makes it perfect for replacing artichoke hearts in salads and roasted meals. However, its crunchy texture makes it unsuited with recipes that call for liquid, which is better to go with a soft texture of artichoke hearts.

Cardone, or cardoon, is a tough plant that looks like celery. Apart from having an artichoke-like flavor, cardone contains many vitamins, minerals, and low calories. That’s why it is a good substitute for artichoke hearts.

Cardone is well-known as a Christmas dinner delicacy. When it comes to replacing artichoke hearts, people love to add it to topping or baking dishes.

Brussel sprouts are considered a popular side dish during the holidays. They provide a significant amount of vitamin C, B-6, and calcium for healthy recipes.

Brussel sprouts taste similar to artichoke hearts with a mild nutty flavor. Therefore, it makes an excellent substitute for artichoke hearts in the case of eating themselves or cooking butter and garlic sauces.

4. Bamboo Shoots: In Side Dishes

With a mild, sweet, and bitter-sour flavor, bamboo shoots make a clever substitute for all edible parts of artichoke, not the hearts only. We can eat them raw, slice and braise, or grill them to be a side dish in place of artichoke hearts.

Note that old bamboo shoots may have an acrid flavor and rugged exterior. So, make sure you get the young shoots for a nutty and fresh taste.

5. Asparagus: In The Roasted Meals

No doubt that asparagus is a favorite part of any healthy diet. Asparagus is nutrient-rich and gluten-free, so it is a great replacement when you don’t have any artichoke hearts.

Asparagus can be fried, roasted, or stir-fried with meat to have a fresh alternative for artichoke. Mom loves to add it to baby’s soup as well.

Among those recipes, the roast is the most popular way to go. Just preheat the oven, place asparagus mixed with some oil, salt, and ground black pepper, then wait for several minutes.

6. The Heart of The Palm: In Making Gravy

The heart of the palm comes from the inner white parts of palm trees. It packs high levels of antioxidants and minerals such as calcium, potassium, zinc, and copper.

Its crunchiness is equal to asparagus, while the taste is similar to the artichoke heart that is mild and slightly sweet.

Hence, in the case of making sauce and gravy, the heart of the palm will be a tender and non-sharpness substitute for artichoke hearts.

7. Chayote: In Recipes For Kids

Chayote is a variety of squash that has been grown all over the world. Like any green veggie, it is rich in fiber, minerals, and antioxidants. Besides, it contains a large amount of water, which is specifically suitable for summertime.

Most people find it has a fresh and slight taste like the cucumber, resulting in maintaining overall flavor and increasing freshness. Plus, it brings a natural sweetness to the dishes, especially for stew when the cooking time is long enough.

You can use chopped or sliced chayote to substitute artichoke hearts in the topping, salads, or any cooked recipes.

Thanks to its similar flavor and texture, kohlrabi is a fantastic alternative for artichoke hearts. Apart from being in mixed veggies and soups, it can be sauteed or roasted independently.

Some people consider it as the best artichoke hearts substitute for the freshness aspect. Its flavor goes somewhere between broccoli, asparagus, and artichoke.

Broccoli is viewed as one of the best weight loss-friendly materials out there. This green veggie contains many vitamins and fibers, which is excellent for improving immune health and skin health.

It is mild and loads of water, crunchy when slightly cooked, and tender when it goes longer. So when replacing artichoke hearts with this green veggie, broccoli stem may lower the taste a little bit.

This is because broccoli has a super neutral flavor. Regardless, people still find artichoke properties in it and use it to replace it.

It may seem a little strange to mention eggplant as a substitute for artichoke hearts. But if you can’t get anything else, why don’t you give it a shot?

Eggplant can replace artichoke hearts in mixed veggies recipes thanks to its similar texture, or served as a grilled side dish.

Well, it depends on your taste, but some people tried these recipes and they said that it works. Try it and you may have one more way to go!

Which parts of the artichoke are edible?

There are three parts of the artichoke that we can eat:

The answer is yes! Artichoke hearts is a keto-friendly ingredient dues to its nutrient properties.

It provides us with lots of nutrient elements but little calories and fat. A medium artichoke hearts contain about 10 grams of total carbs, which comes from half of the fibers and the rest of net carbs.

Therefore, if you follow a keto diet, don’t hesitate to put this veggie into your list. It not only helps control weight but enhances our health, as well.

While other parts may be a little bitter, artichoke hearts come with a soft and mild flavor, resembling young asparagus or boiled potato.

Overall, their taste is not overpowering and won’t affect the general flavor much. Artichoke hearts are there to be an additional ingredient that contains a load of nutrition for our body.

In general, it still retains much of its original taste, and we can enjoy a meal made from canned artichoke hearts with a fresh flavor.

However, canned artichoke often goes with acidic saltwater and some seasonings. The levels of those additional parts can make different changes to the flavor, and sometimes it will go out from what you want.

Therefore, you should look at the ingredients and check if they match your recipes.

We’ve gone through the most popular substitutes for artichoke hearts. Fortunately, they all are loads of health benefits and easy to find.

Have you figured out the best suit for your dishes? Don’t hesitate to share your recipe with us in the comment session, and others may learn something from you. Thanks for joining us!