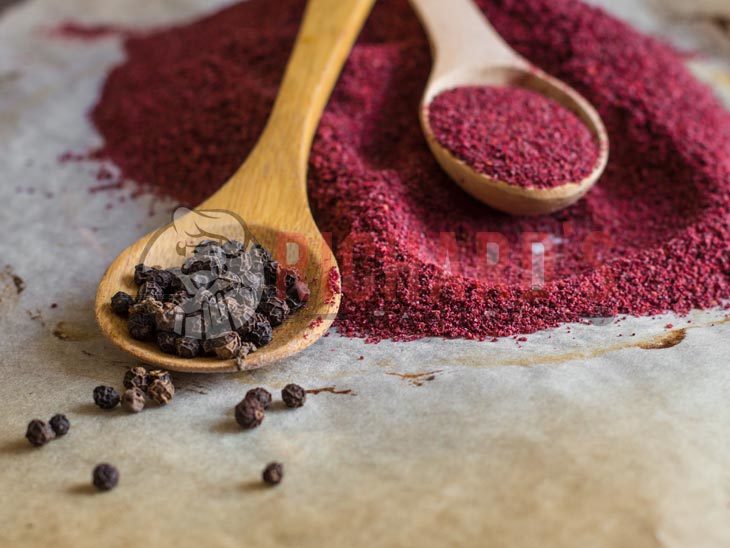 Nowadays, people look for sumac substitute because with a dark red shade and trademark bitterness, sumac has always been one of the few seasonings with a vital contribution to the culinary world of the Middle East.

Along with delightful herbs like rosemary, gochugaru which has been constantly used to raise the flavor of various dishes,  the sumac has also gradually become more popular around the world because of its exotic taste and wholesome properties.

The discovery of sumac dated back in the Roman empire, and its health betterments have been documented as preventing aging, lowering blood glucose level, etc.

The seasoning is not only good for your health but also complementary in cooking.

7 Delicious Ingredients To Use As Sumac Substitute

Sumac is an excellent seasoning for its complex and mouth-watering taste. However, if you join its fan club and want it to be a part of your meal on a daily basis, you will frequently find yourself in the predicament of running out of sumac.

And, in a hurry, you must find a substitute with the most resemblance to both the taste and the smell of sumac.

Lemon zest and salt is the first sumac spice substitute we want to introduce you to on this list.

Making it is easy: first, trimming some lemons to produce lemon zest. Second, add some more salt, then, it’s done!

Now you have got a mixture of lemon zest and salt to substitute sumac for your recipe. Many people recommend this option as you can make it in a snap of a finger and there is no need to thin your wallet along the way.

Making this mixture is time-saving, so, what about its taste? You must wonder whether it is similar to the sumac, right?

You don’t have to worry then because the citrus-alike sourness of the lemon zest-salt mixture is as equal as the sumac, which makes it the most appropriate substitute.

Lemon zest’s acerbity complement with the salty flavor creates a great seasoning for hard-boiled dishes with several ingredients as the spotlight, red meat, white meat, or seafood will do.

Contrary to its convenience, the lemon zest and salt mixture doesn’t have many positive effects on health.

Evaluating the mixture’s nutritional facts, on the 100g serving, there are 214 kCal but 39,333 mg salt, which aren’t proper for people with heart issues.

We suggest you not use this seasoning too often because your body should not consume too much salt per day.

Lemon juice must be the sumac alternative on the list that is easiest to find. Just extract some lemons, add some sugar (or not, according to your preference), and then you have got an ideal ingredient for your dish.

However, the juice’s original fresh taste cannot last too long, so we advise you to use it immediately after extraction.

Lemon juice is convenient, cheap, and easy to make. The juice retains the acidic and juicy taste of lemon that can resemble the sumac’s flavor. If you want to reduce the bitterness, you can add some salt.

To add-in, this substitute for sumac contains Vitamin C, K, E with only little fat and calories, which is suitable for a weight loss diet.

Even though lemon juice is a great choice to replace sumac at home, sometimes it can intrigue the citrusy taste, which may not be your intention.

We suggest you add just a little lemon juice into your dish, taste it carefully, and adjust until your food has reached the desired flavor.

Lemon zest is bitter, and pepper is salty. Therefore, these two complement each other to create a unique taste that other seasonings could not have.

Before the lemon was discovered in the Middle East, sumac was used as a sourness supplement. That being said, the acerbity level in lemon zest is just the same as the acidity in sumac.

On the other hand, there is a crucial disadvantage of lemon pepper seasoning that it contains little nutrition. On the 100g serving, there are no carbohydrates, no fat, no protein, and minerals.

There is only an unremarkable amount of vitamin C and 11,429 mg salt. So, this seasoning may not be the right choice for people following a low sodium diet.

Za’atar is a culinary herb that originated from the Middle Eastern. It is also the name of the mixture of sesame seeds, salt and some other herbs.

With the unique spice, the Za’atar has become one of the top common culinary ingredients not in the Middle East area but also around the world.

To make Za’atar, firstly, farmers harvest the plants and dry them in the sunlight. Then, they mix it with a pinch of salt and sesame.

The seasoning is produced in a slight brownish powder form with the herbs-alike smell. When being sprinkled, the za’atar does not create any strong, irritating smell, making it recommended by most people.

What makes it a good sumac spice replacement is its light smell and the slightly spicy and lemony acerbity.

Also, while being dried, the za’atar was also mixed with salt, so some za’atar can also be salty flavored either.

Therefore, the aroma and the spicy-but-sour taste of za’atar make it an excellent substitute.

In most recipes, this seasoning can also complement the ingredients as sumac did.

Similar to za’atar, tamarind is also a great solid sumac substitution. This term refers to a bearing edible fruit originating from tropical Africa.

In global culinary culture, tamarind has long been used as a seasoning in cooking. It can be an add-in for curries, chutneys, or syrup in India and Pakistan.

Stretching from Lebanon to Iraq, the tamarind is considered a critical ingredient for stews due to its half-sweet, half-sour flavor.

The tamarind’s acerbity is rather eccentric and unforgettable because it is not only acidic but also sweet at the first bite.

Tamarind fruit has a sour-and-sweet taste, though the sweetness is pretty bland. Its pulp has been used broadly in cuisine and traditional medicine.

Besides, the seeds are used to extract oil while its tender leaves are useful in Indian cuisine.

Thus, because of its various applications in cooking and other fields, the tamarind is a common dweller in cooking space all across the globe.

The sour edible pulp is the tamarind’s secret weapon. When the fruit is unripe, its sourness is so extreme that it can paralyze one’s tongue, but the bitterness can slowly decrease as the fruit reaches its maturity.

So, the sourness varies according to the harvesting period. If people want to have so-bitter tamarind, they can cut it in the “immature” period, and for those who tend to take less sour, sweeter tamarind fruit, take it in the ripe times.

In brief, the tamarind is a proper substitute for sumac due to its slight tartness.

With its unique taste, tamarind can be considered one of the excellent ground sumac substitutes for your meal.

Vinegar must be the most popular sumac spice substitution on this list. It has been long used in cuisine around the world for its slight smell and moderate bitterness. Also, this seasoning can get along with almost any ingredient.

Nowadays, vinegar can be extracted from many sources: beverages, fruit, grains, and fermentations.

The citrusy seasoning from each origin can have different tastes and nutrition facts. For example, marinade from apples is said to be sourer than the type coming from grains.

Vinegar has always been considered a proper diet element because of its nutrient content. On the 100g serving, there are only 21 kCal, 5mg salt, 7mg Calcium, 1 g Carbohydrates, but no fat, no protein at all.

In a nutshell, vinegar’s acidity is said to be at a higher level than sumac. So, we recommend that you only add it in small amounts until you reach the desired taste.

Amchoor, or amchur, is made from dried unripe mango flesh. It is available in both powder and slices form and commonly used in Northern India nowadays.

In terms of taste, the amchoor gives off a honeyish fragrance and a sour- but-slight-sweet flavor. Due to its solid form, the amchoor is a suitable choice if you need to add a bitter taste to your dish but do not fancy any liquid seasonings.

Besides, this mango-based ingredient can get along well with chicken or fish dishes as it provides a sour taste like citrus.

Additionally, amchoor provides a spicy and sour flavor which is similar to the sumac’s taste.

Amchoor is highly recommended for its nutritional elements. On the 100g serving, it contains 300 kCal, 80g Carbohydrates, but 0 fat and protein at all.

In general, the amchoor is a good substitute for sumac herb. However, its remarkable disadvantage is that the amchoor isn’t a fruit that can be grown everywhere, so its stock is limited in some countries.

Produced from dried berries of the sumac flower, sumac is a bitter and spicy seasoning with a hint of lemon flavor.

The ingredient is used as sprinkles, or to slightly add sourness to the dish before serving.

Therefore, the sumac tastes unique and bizarre, just like the combination of acerbity and spicy. Sometimes, it fills your mouth with the taste of spice; sometimes, it assembles the tartness of lemon.

What Can We Do With Sumac?

But The two most common kinds of sumac used in daily cooking are fragrant sumac (Lemon sumac) and smooth sumac (scarlet sumac).

Given its complementary features in cooking, sumac can be applied in various dishes in many different functions.

Even though the sumac is commonly used in Middle Eastern cuisine, this all-around ingredient has many culinary potential:

Create the liquid-free citrusy flavor: While marinating the meat, people usually add citrus or lemon juice to increase the acerbity.

However, putting juicy meat in electronic grillers and smokers is never a good idea. In these cases, this seasoning can be used as a sumac replacement for citrus or lemon juice to add up the meat’s acidity without liquid.

By this post, we have gone through some substitutes for sumac herb and some methods to use sumac in cooking. Each ingredient has its advantages and disadvantages, and, according to your needs, the decision is up to you.

Personally, if we are about to choose a baharat substitute, we will select vinegar over others because it is cheap, easy to find, and good for your health. It’s the best to choose the one that can not only create the best flavor but also do wonders for your health.

Hope this article provides you much useful information in finding a sumac substitute.