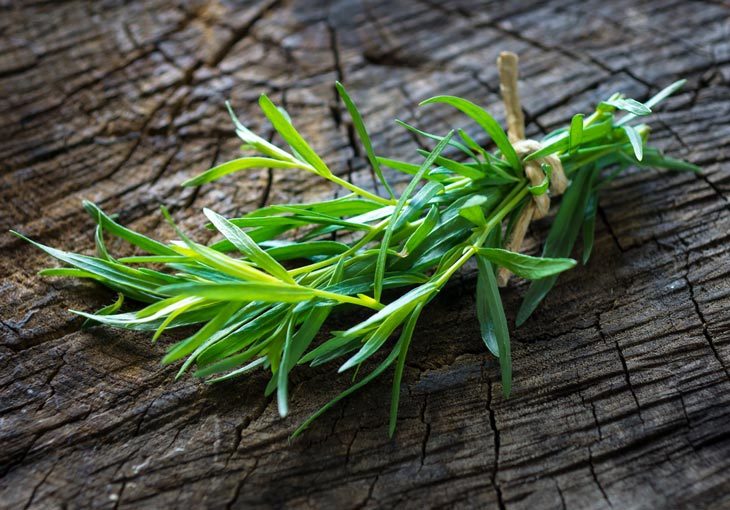 Tarragon is a common herb in French cuisine, although it can also be found in Mediterranean or European recipes. Like fennel, the flavorful herb has a licorice or anise aftertaste. The dried variety is identical to the fresh one but not quite as potent.

Tarragon is so distinctive that you should go to the store to purchase some if at all feasible! Yet, what if you are planning to make a dish that requires tarragon, but you don’t have any?

We have all of the solutions. Here are the greatest 11 tarragon substitute options!

Tarragon is a type of herb that belongs to the sunflower family; it grows wild in several places across the United States, Asia, and Europe.

People can use tarragon in a variety of cuisines due to its distinct taste. The licorice flavor complements anise, chervil, and fennel nicely.

What Does Fresh Tarragon Look Like? Even though it is linked to the sunflower, it does not resemble it in the wild. It resembles grass with flat, tiny leaves rather than long stalks. The herb has distinctive leaves that help to identify it. It has long, slender leaves with pointy points. It has brilliant green stems and vibrant foliage.

It’s impossible to tell the difference between two variants (French and Russian) only by looking at them because they’re so similar. Smash the leaf between your fingers and sniff it if you’re unsure. The Russian tarragon has a pleasant grass aroma with a hint of anise, while the French one has a pronounced licorice smell.

Tarragon is used far more frequently in European recipes, particularly in France, known as the “King of Herbs.” Furthermore, this herb is a favorite due to the health benefits it brings, such as containing few carbs & calories, good nutrients, improving sleep & appetite, blood sugar decrease, etc.

What Can I Use Instead Of Tarragon? Top 11 Best Tarragon Substitute Options

When you don’t have fresh tarragon on hand, what can you use in place of tarragon? This part will show you the top 11 fresh tarragon substitutes that you could already have in your kitchen.

If fresh tarragon isn’t available, dried tarragon would be the next best thing. Tarragon in its dried form is widely accessible and easy to locate in most supermarkets!

While dried tarragon may suffice, you ought to be aware that the flavor of fresh tarragon is significantly different from that of a dry one.

When replacing dried tarragon with the fresh one, use it carefully because it is more robust (strong taste). Start with 12 teaspoons of dried herb for each tablespoon of fresh one needed in a dish. While cooking it, taste to modify!

When used in sufficient quantities, the dried one can give a bitter aftertaste! Try one of our other tarragon replacement choices below to minimize this when using dried herbs.

Whenever tarragon is required in a dish, use modest amounts. When combined with other herbs, dried tarragon has an extremely distinctive taste.

Angelica has a depth of flavor comparable to dill or fennel (both can be used in place of tarragon based on the recipe), but it’s a little more earthy and sweet. The only drawback would be that this herb can be tough to come by!

If you don’t have any tarragon on hand, angelica is an excellent substitute for tarragon.

Utilize the leaf, stem, or stalk marketed as a herb rather than the root, which is usually used as a seasoning! Some people describe its flavor as a cross between licorice and celery. The licorice taste is very subtle, with only a smidgeon of it in the background.

You can ​​use angelica to substitute for tarragon leaves in a 1:1 ratio without affecting the flavor of your dishes.

Basil is a far more common sub for tarragon, and you should be able to purchase it at your local supermarket ( fresh or dried ). The taste and aroma are nearly identical to tarragon; however, it lacks the same licorice ‘bite.’

Fresh basil is a great substitute for fresh tarragon, though dry basil is a little milder and demands a little more when used in place of the other. In fact, Basil’s beauty lies in how well it can stand up to more powerful flavors.

In a 2:1 ratio, utilize two teaspoons of fresh basil for every one tablespoon fresh tarragon. If you’re substituting dried tarragon for fresh, add twice as much basil.

The only distinction between dill and tarragon is that the former lacks unique licorice smells and fragrances. Still, that might or might not be an issue depending on how you intend to utilize them in your dishes.

If you don’t have tarragon available, the absence of licorice ingredients with dill will likely upset you. Dill, meanwhile, is a good substitute for tarragon if you want to eliminate the licorice notes while keeping the remainder of the dish’s taste profile.

For optimum results, substitute tarragon with a 1:1 ratio of fresh or dried dill.

Chervil seems to be as close to a complete replacement and herb substitute for tarragon as you’ll find, with a taste profile that’s remarkably similar to tarragon – and possibly even more forward and strong!

Chefs sometimes describe chervil as a cross between tarragon, parsley, and chives, a versatile ingredient that may stand in for or substitute any of those ingredients.

Whether you’re using fresh or dried herbs, utilize a 1:1 ratio when you replace tarragon with chervil in your dishes.

Since chervil has a milder taste than tarragon, it’s best to test and modify while you cook.

Although fennel leaves (also known as fronds) resemble celery, the flavors they generate are more akin to tarragon, thanks to the strong licorice flavor.

Fennel seeds have a much stronger licorice flavor, so you can experiment with different combinations of fennel seeds and leaves to achieve the precise amount of licorice taste you want.

Oregano is among the most adaptable herbs, and it functions well as a substitution for tarragon. The main distinction is that oregano has a somewhat more bitter depth of flavor, which can be a little harsh when dry. Fresh oregano, on the other hand, can be used to combat this.

With oregano, you get a little of heat and pepper that you don’t get with tarragon. A lot of this can be hidden in your recipe with other components.

Fresh and dried oregano should be used as a straight 1:1 substitute. Use the same amount of oregano as tarragon.

If you don’t even have any tarragon on hand, a mixture of parsley and cinnamon powder can become a great tarragon alternative. That’s something you probably already have in your pantry, and it may easily fill the role of tarragon in terms of flavor and aroma.

Combine a teaspoon of parsley with 12 teaspoons of cinnamon powder in a bowl of water. This way, you’ll have the right amount to substitute for tarragon in your recipes. Use seasonings such as French or Bearnaise sauce.

In most dishes, marjoram can be used as a substitute for tarragon spice. There’s no need to be concerned; this fragrant herb will complement your dishes.

It’s a herb that’s related to oregano and is widely used to season meats, salads, soups, or other meals.

Start with a 12 teaspoon and work your way up. Combine it with tarragon in recipes that call for it, such as chicken, turkey, or some cheese dishes.

Targetes, sometimes known as Mexican Tarragon, can be used in place of Tarragon. This is a herb that is commonly used in the production of medication, or you can make tea out of Targetes as well!

Its unique flavor and perfume make it handy in the kitchen. In particular, it has a hue that is somewhere between yellow and green, with an odorless and refreshing flavor. When substituting, use a 1:1 ratio.

Rosemary will be the last herb on our list. It is related to tarragon and belongs to the sunflower family. Many people like rosemary since it gives the food additional taste and scent.

Use in moderation because it has a balsamic, peppery flavor with a woody aftertaste. It goes well with stews, soups, and other dishes that demand tarragon.

How To Choose The Best Alternative for Tarragon?

For each of your cooking requirements, we’ve provided a range of options to both fresh and dried tarragon above! Utilize tarragon with mild proteins like chicken, rabbit, or fish when it’s in season in the springtime. This handy plant is also delicious in stews and soups made with broth or cream.

Replace tarragon with herbs like marjoram, dill, and basil if you enjoy fresh herbs but don’t like the tart taste of licorice in tarragon.

You can quickly replace many herbs for Tarragon since they are readily available in the grocery shop. It’s wise to note that you’ll need to change the measurements accordingly if you’re substituting other herbs for Tarragon.

Some components just call for a pinch, while others call for one to two teaspoons. You can still try with your cooking if you haven’t used Tarragon previously. You’ll discover new ways to combine Tarragon with other plants in this way.Now, when someone questions you, “What’s a good tarragon substitute?” you’ll definitely know the correct answer!