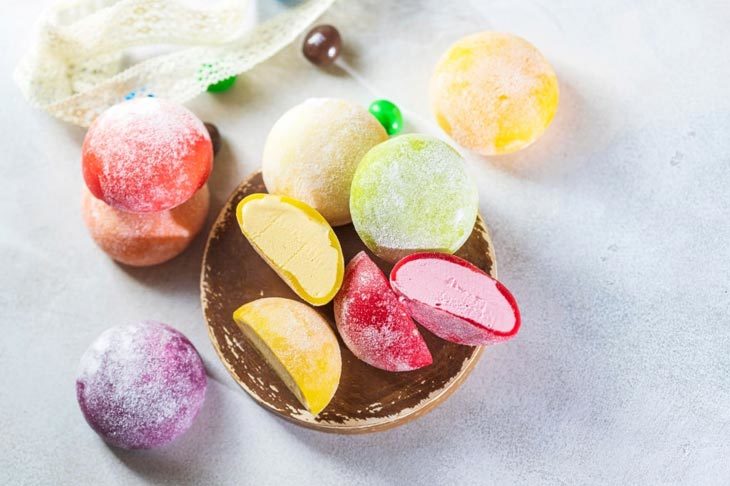 You have heard of a lot of mochis – a well-known traditional Japanese cake. Almost anyone you know recommends you try this yummy cake whenever you have a chance.

So, what do mochi taste like? Is it truly a heaven-tasting cake that steals your heart at first bite?

Let’s scroll down the following article to discover detailed information related to this fantastic cake.

So before anything else, let’s check out some interesting information about mochi to better understand this savory cake.

Mochi is a soft and sticky Japanese cake made of mochigome rice (Japanese glutinous short-grain rice) and other additional ingredients such as sugar, water, and cornstarch.

Traditionally, Japanese mochi is made by pounding steamed rice, then molding the paste into a sticky rice ball. After that, mochi makers will add the fillings, such as sweetened bean paste, to the inner part of the cake.

According to Japanese legend, mochi cakes present luck and prosperity. That’s why it is a tradition for the Japanese to enjoy mochi at the New Year ceremony.

Over the years, people have added diverse mochi versions to the roster of its traditional uses. Japanese people use it not only as a healthy snack or a major component of the main meal but also as an ingredient in many other savory dishes, such as ice cream, soup, etc.

Is Mochi Good For You?

Is mochi good for you? Of course, yes. Here, let us reveal several common benefits this delicious cake provides you with.

First, it has been known as a versatile, healthy snack in the Japanese diet.

Back in the old days, mochi has been an essential part of rice farmers and samurais as it provides lots of energy and various nutrients within a small matchbox-sized portion.

That’s why farmers and samurai usually bring and eat mochi cake instead of rice balls to their working places at lunches or dinners.

Additionally, mochi brings many health benefits because it is protein-rich yet gluten-and-cholesterol-free.

Although mochi is yummy and healthy, it can lead to choking if you do not take proper precautions while eating it.

Because of its thick and sticky texture, it would be best to cut them into small pieces and chew each piece thoroughly before swallowing.

Since eating mochi involves careful chewing and swallowing, those with trouble in swallowing, young children and elderly people should not try this cake.

What Do Mochi Taste Like? – Top Best Mochi Flavors To Try Out

Mochi is such a savory sticky rice cake that almost everyone will go crazy for as it has a distinctive rice-tasting flavor with a dense and chewy texture. Some tell that mochi taste like combination of marshmallow and gummy candy.

Let’s discover more details about the taste of different types of mochi in part below.

Let’s start with the traditional version of mochi – Kiri mochi, also known as plain mochi with no filling.

It tastes pretty much like a gummy candy or marshmallow, with a starchy after taste. Usually, the Kiri mochi producers will cut it into bars and vacuum seal them.

There are plenty of ways to use these pieces of mochi. For instance, you can warm them in the microwave until soft and gooey, then top them with sweet condiments or fruit for dessert.

Furthermore, you can add them to your favorite soups, including the ozoni soup, during the New Year celebration.

The next well-known type of mochi is daifuku mochi.

Daifuku mochi has a very similar texture and starchy flavor to Kiri mochi as they are all made from steamed mochigome.

So, how does the filling make its flavor far different from that of Kiri mochi? What does red bean mochi taste like?

Well, the red bean paste adds a gentle creaminess and sweetness to take the flavor of this sticky rice dough to the next level.

Bota mochi and ohagi are the inside-out versions of daifuku mochi as the fillings, such as bean paste coats outside the sticky rice ball.

Japanese eat them during the Buddhist holiday of Ohigan, held in the spring and fall. Traditionally, while they will eat bota mochi, named after the peony (botan) flower in the spring, they prefer to have ohagi, named after Japanese bush clover in the fall.

Is their flavor the same as daifuku mochi?

Yup, except for the fact you will feel the sweetness of the bean paste before the mochi balls’ goosey taste.

Sakura mochi is made of pink-colored rice flour and filled with red bean paste (Anko). Sometimes, mochi makers also wrap it in an edible pickled cherry blossom leaf for decoration.

For the mochi taste, sakura mochi marks a resemblance to the taste of cherry. However, its flavor is much sweeter due to the Anko filling.

Once you eat this sweet mochi, you also feel a gentle flowery scent with a distinctive salty flavor from the cherry leaf.

IsobeYaki (or Isobe Maki) involves toasted or grilled plain mochi pieces wrapped with sheets of nori (dried seaweed). Once you have these mochi pieces, dip them in sweet soy sauce to enjoy as delicious snacks.

How does mochi taste after wrapping in nori and dipping soy sauce?

The warmed, fresh mochi brings out a chewy-crispy flavor while the nori and soy sauce add umami and a slightly sweet taste.

Yatsuhashi is a famous type of mochi originating from Kyoto.

Japanese make Yatsuhashi by flattening and baking the mochi dough until it becomes solid enough to cut into squares. During the rice-cracker-making process, they usually add additional ingredients, such as cinnamon or matcha green, to enhance the cake’s flavor.

After that, they place the filling into the square’s center, fold it, and enjoy this delicious snack.

Compared to other types of mochi, Yatsuhashi is much crispier. Thus, you will find it a little hard to bite and break with your teeth. It also comes with a more intense flavor due to the added spice.

Mochi ice cream – we bet that you might have seen this sweet treat popping up in the grocery stores as this mochi type has been popular in the US in recent years.

What do mochi taste like when it has ice cream filling?

Well, it tastes addictive due to its chewy texture on the outside and the squishy ice cream flavor on the inside. Whatever flavors you prefer-like chocolate, strawberry, or vanilla, these mochi balls have them all.

Besides, if you feel adventurous, try out the unfamiliar flavors, such as mango or black sesame.

Hopefully, throughout our article, we have provided everything you need for the question – what do mochi taste like.

This traditional Japanese dish is such a fantastic treat that we ensure you deeply fall in love with it at first bite.

So, go ahead, and try out this yummy rice cake right away