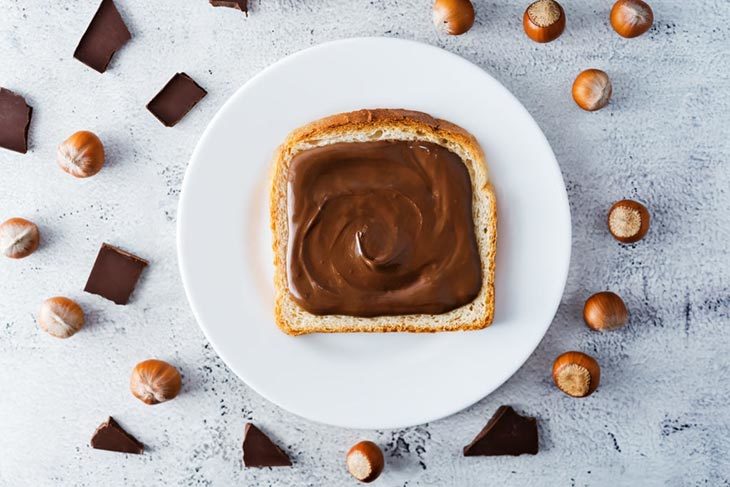 Nutella is a popular spread for desserts. However, do you know exactly what Nutella tastes like?

From Nutella-inspired cocktails to Nutella-flavored ice cream, this chocolaty treat has made its way onto restaurant menus around the world and is a household favorite for many. Just ask my son! It is a must-have in the pantry at all times.

Scroll down to learn more about Nutella and what it exactly tastes like!

Ferrero, one of the largest chocolate manufacturers, produces Nutella, a sweetened hazelnut cocoa spread. To compensate for the lack of cocoa in Italy during World War II, Ferrero added ground hazelnuts to a chocolate coating.

Since then, Nutella has been popular around the world, and its popularity is increasing. We can use this chocolate and hazelnut spread in many ways, including a topping for morning toast, pancakes, and waffles.

Restaurants presently categorized Nutella as a dessert topping, but Ferrero has been lobbying to reclassify the spread as a breakfast topping akin to jam.

Nutella is the offspring of chocolate and hazelnut, a delicious mash-up of the two tastes. It has a sweeter flavor, but not too sweet that it makes you feel unappetizing.

The flavor of Nutella sometimes reminds us of peanut butter, but with a touch of hazelnut covered in chocolate and then melted into jars of Nutella for all to enjoy.

To understand Nutella and how it tastes, we need to dig deeper into its ingredients and sources.

Ferrero is proud of the simple ingredients that go into making Nutella.

The following are the ingredients in Nutella:

Although Nutella is said to be a hazelnut spread, sugar appears first on the ingredient list. This is because sugar is the major component, accounting for 57% of the total weight.

Here are some frequently asked questions we have collected while researching Nutella taste.

What is the process of making Nutella?

Should I eat Nutella?

Nutella, like other high-sugar food, is commonly used as a breakfast spread rather than a dessert. Consuming Nutella daily will increase your intake of added sugar, and most individuals already consume far more than the amount suggested.

To live a healthy life, reduce the quantity of sugar in your diet as much as possible by eating fewer sugary foods and drinking fewer sweetened beverages.

Although people use Nutella as a breakfast meal, it is better to use it as a dessert spread in moderation. It’s good to have a tiny quantity of Nutella each day if you’re a Nutella enthusiast.

Does Nutella have chocolate in it?

Based on the history of Gianduja (name of a well-known marionette character), Nutella is a variation of gianduja, which is composed of around 70% hazelnut paste and 30% chocolate. This food was established during Napoleon’s reign.

Due to a Mediterranean embargo on chocolate, chocolatiers mixed it with hazelnuts, which were plentiful in the area.