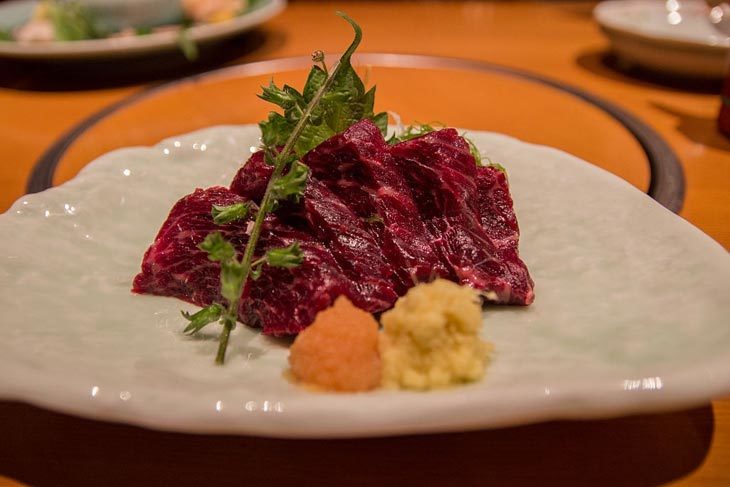 We have known about steak meat made of beef and other cattle meat. But have you heard of whale steak?

Whale meat is not common meat you can find in the store, so if you wonder, “what does whale taste like?” or “Is whale meat good? I have just the answer for you below!

Can You Eat Whales?

Whales, the biggest mammal on our planet, represent the diversity of mother nature with their enormous size. Whales are also considered as rare meat like porcupines in some countries. In the US, it is illegal to sell whale meat. So, do people eat whales? Is whale meat edible?

Although we have had a history of whale fishing and hunting since 1620, the consumption of whales is restricted due to two main reasons: whale meat toxicity and population control.

According to the Humane Society International (HIS), whales are exposed to many contaminants such as heavy metals, mercury, and organochlorines. These substances tend to come from whales consuming mammal or fish eaters like orca meat, pilot whales, false killer whales, sperm whales, beaked whales, dolphins, porpoises, and blue whale meat.

With its large size, it is understandable that the toxicity of whales would be significantly higher than other species.

Once you allow these substances inside your body through whale meat, severe health problems can occur, such as nerve damage, liver damage, immune system suppression. In the worst-case scenario, it can cause cancer, dysfunction of metabolic and neurological problems.

However, whales consume lower animal protein, such as crustaceans and planktons, leading to a low contamination percentage.

Another reason why whales should not be consumed is the risk of whale population extinction. Whales are slow to reproduce with a long lifespan. Due to high whale hunting, certain whale species are on the verge of extinction, such as the North Atlantic right whale, with only 300-400 species of whale existing.

To this point, there are only a few countries that allow whale consumption, which are Japan, Norway, Russian, Canada, the state of Alaska, and a few Caribbean nations. Therefore, if you live in these countries, you can find whale restaurants or purchase a whale meat package for your dinner.

Whale meat is not the most consumed meat globally. This fact may place a stumbling block for many people to understand the taste of the biggest mammal in the world. So, how does whale meat taste?

It is said that whales taste like fish as their habitat is the ocean only. However, this perception is not true. Whale meat is more similar to  terrestrial animals than their friends at sea as they are part of the mammal, not the fish group.

Some people find that whale tastes like reindeer or moose meat. Others think it is a combination of beef and shark meat. In many whale-consuming countries, minke whale, the popular whale meat in the market, can be served raw with little to no seasoning.

So, let’s get into details of the outlook, flavor, and texture of whale meat.

Minke whale is part of the baleen whale family with a low level of contaminants that can be safe for consumption. In Japan, the culinary use of minke whales is so diverse because of their distinctive flavor and texture.

Whale meat has a special dark red color signifying a lean and high protein content. Leaner than chicken breast, it is preferable to be consumed in slices like salmon in Japan.

But don’t let it fool you, as whale meat has no similar taste to the fishy taste of salmon. Instead, dark red meat has a rich and gamey flavor that you can find in beef and venison.

When taking a bite, you may find it super tender and soft with umami and oceanic notes. Minke whale meat also has a great content of iron and niacin with polyunsaturated fatty acids, which has many health benefits.

That’s why many people tend to enjoy minke whale raw to keep most of its nutrients. Whale parts like fat, belly, and tail are most commonly used to create an amazing whale dish.

If you ever come to Greenland, there is a delicacy dish that many Greenlanders enjoy greatly: raw whale blubber. Blubber is known to be an important part of the mammal body. It is a thick fat layer that acts as an energy source with high vitamin C and D.

This fat layer is also a traditional meal for Alaskan indigenous people for vitamin supplement in their diet. The fat when eating raw tastes light, gelatin-like, soft, and creamy with nutty notes that melt at the touch of your tongue.

It might not be a great dish when it is eaten without seasoning. However, if you add a splash of soy sauce and aromat, it is easier to enjoy this high-nutrient whale meat.

Another famous traditional whale blubber dish is Muktuk. It is an Inuit dish containing frozen blubber and whale skin.

The dish is made by dividing them into thin strips of whale and seasoning with salt. Then you can consume them raw, deep-fried, or breaded.

The light taste of blubber combined with the chewy texture of the skin makes a combination that can be found similar to fresh coconut or fried eggs. Besides whale meat, the Inuit diet also contains walrus, which has a similar texture to whale meat.

Walrus has a firm consistency with rich and potent flavor and a fishy aroma similar to horse meat. When cooking it, people tend to use condiments and aromats to balance the taste.

How To Eat Whale Meat?

Whale meat is used in many countries, but only three countries have commercial whaling: Japan, Iceland, and Norway. As a result, whale cuisine is also flourishing in these countries with many types of whale dishes.

You can find whale stock made of whale fat and meat in Norway. This distinctive and warm broth is served with flatbrod, potatoes, and vegetables. In Japan, the whaling industry has bloomed with dishes of all whale parts. From the skin to the heart and organs, they can always find a way to make a dish out of it.

If you love the fresh taste of whales, you can eat them as slices of whale sashimi topped with blubber. You can also use them with rice like whale sushi or in cartilage salads like the way you use with salmon. With some condiments and soy sauce, it will be a flavorful experience.

As it tastes like beef, you can also make whale bacon or whale steaks out of thick cuts of whale belly. The result would be delicious, rich, yet tender whale meat for any steak lover.

Fried whale skin and meat can be used to create whale burger and sandwich recipes. Furthermore, cooked whale meat is amazing when combined with noodles, soups, and stews.

Whale meat might not be familiar to American cuisine, but it is known in some countries as a super lean and healthy source of meat. So, in case you wonder, “What does whale taste like?”

I hope this post has answered all of your inquiries. Although whale meat is tasty to try, it should be used with caution and a strictly restricted amount.