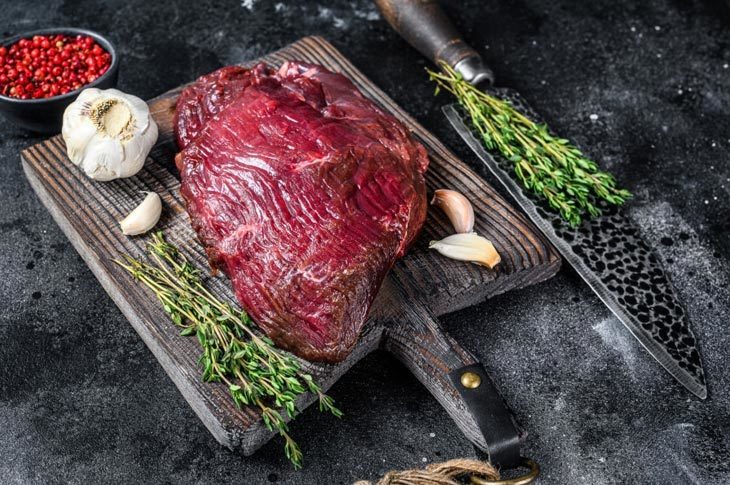 Many of us use “deer” and “venison” interchangeably. It is, however, somewhat inaccurate to say it like that. So, what meat is venison? And what is the difference between deer and venison?

Deer and venison meaning have relatively different connotations. The term “venison” comes from the Latin word “venari,” which means “to hunt or pursue.”

Eager to know more? Please scroll down to dive in and get the bottom of this steak.

What Meat Is Venison?

In the past, people used the term “venison” to refer to any animal caught during a hunting expedition. A venison animal might be a venison boar (or wild boar), a hare, a deer, or an antelope at that time.

In 1983, the USDA redefined “venison” for food labeling purposes. Since then, this term has been commonly used in the United States to refer to meat from deer and antelope species.

So what is deer meat called? Now you know the answer. And if someone asks, “Is venison a buffalo?” you may firmly respond, “No, it is not.”

This steak tastes earthy. Despite the massive bodies, most members of the deer species are herbivores. Its sharp and earthy flavor derives from the green leaves, sedges, fruit, and acorns that they have eaten throughout their life.

On the other hand, some people find venison gamey. Most wild animals indeed have a distinct pungent smell. Some people think this strong flavor elevates the dish to a whole new level.

Others who are accustomed to eating industrial meat will find it distasteful.

Lean venison is rich in proteins, fat, iron, phosphorus, zinc, and potassium. It is also a good source of amino acids and vitamins.

On average, 3 ounces of the flesh provides a great deal of nutrition: 102 calories, 19.5 grams of protein, and 2.1 grams of fat. This meat is devoid of carbs and fiber.

What Type Of Meat Is Venison?

The first venison from our list is the Sika deer. The Sika deers are native to Japan and have spread to numerous continents. You may find plenty of this species in Texas, Maryland, and Virginia.

On appearance, Sika deers have short, golden, silky hair, with 6-8 rows of white spots running along the two sides of the body. There is no spot on its legs, head, and belly.

Sika deers are voracious eaters that aren’t choosy about what they eat. They adapt well to diverse captive breeding conditions. The deer consume greenery such as plants in the “herb” and “wooden” families.

Any leaves with bitter, spicy, sour, and sweet tastes are appealing to Sika deer. Young buds, grasses, legumes with flower buds, bean sprouts, and other similar plants are also their favorites.

The meat from Sika deer is low in fat and healthy for humans. Nonetheless, it has a strong flavor and requires heaps of marinades.

Elk (or North American elk) is a gigantic member of the deer family. Most wild elks live in the forest and woodland edge.

During the winter, the species travel from higher to lower land in search of food. Their favorite veggie includes shrubs, grasses, and forbs.

Elks commonly wander in herds in the northeast and northwest of the US. North Carolina, Kentucky, and Tennessee are also home to them.

Elks are popular wild game venison. A mature elk may reach 50-60 inches at shoulder height and weigh over 1000 pounds. On the head is a six-foot-long set of antlers. A mature bull elk may be three times heavier than a female one.

Elk has just 50 calories per 3.5 ounces serving, ideal for dieters. Elk venison tastes like beef but with an acrid bite. You can marinate the meat with sauces to mask the unpleasant flavor. Or you can opt for farm-raised elk with no pungent smell.

Moose is the largest species of the deer family. Male mooses have magnificent antlers, making them an attractive target for hunters.

The thick layer of hair helps moose adapt to extreme cold. It is a solitary animal that is generally inactive and moves slowly. Its diet includes both aquatic and on-land plants.

The moose has a long snout and extremely sensitive lips. They can tell the difference between fresh bamboo shoots and dried branches. Their lips also assist them in gripping and holding food.

Moose venison resembles beef in both appearance and texture. You’ll notice the juiciness, but it’s not as tender as beef.

Nilgai antelope is a unique mammal with a bizarre body shape. Their body is a mixture of the head and horns of a cow with the body of a bison. At the bottom is the tufted tail with white spots.

Nilgai antelope mostly lives in the South Texas grasslands. They are adventurous eaters. Their diet includes grass, seeds, and shoots of trees. But when there is a food shortage, some may hunt for insects and small mammals to eat.

The meat of Nilgai antelope is high in nutrients, with a lower cholesterol level than chicken. Moreover, the calories content is three times lower than that of beef.

Their meat has a light taste and goes well with most spices. And that makes it a good option for BBQ gatherings in the fall.

How To Cook Venison

There are multiple cooking techniques suitable for cooking venison. You can sauté, make a steak, roast, or barbecue the meat.

When cooking this steak, it’s important to note that the fat content is minimal. The meat also has a gamey flavor. Another caveat is its chewiness. You’ll need to remove the skin (if any) from the cuts of meat for the best texture.

If you pan-sear the meat, consider using gravy made from the fat of different animals. Doing this will bring you medium rare venison steak with delicious flavor and perfect moisture.

Overuse of sauce, however, might mask the taste of meat. Besides, make sure your gravy isn’t too salty or greasy.

Venison nacho is also a fun option for a weekend meal. If you have some tortilla chips in the fridge, take them out and heat them.

Then spread tortilla chips evenly on a baking tray, topped with a mixture of cooked ground meat and spices (diced garlic, onions, tomatoes, etc.). Bake for 3-5 minutes, and you have a delicious dish for dinner.

We hope you have figured out the answer to “what meat is venison” from this article. Nowadays, deer meat is growing in popularity thanks to its rich nutritional content.

Properly cooked this flesh can deliver outstanding flavor and bring a fresh breeze to your culinary exploration.

So the next time you go to the market, try to find some and enjoy it for yourself!