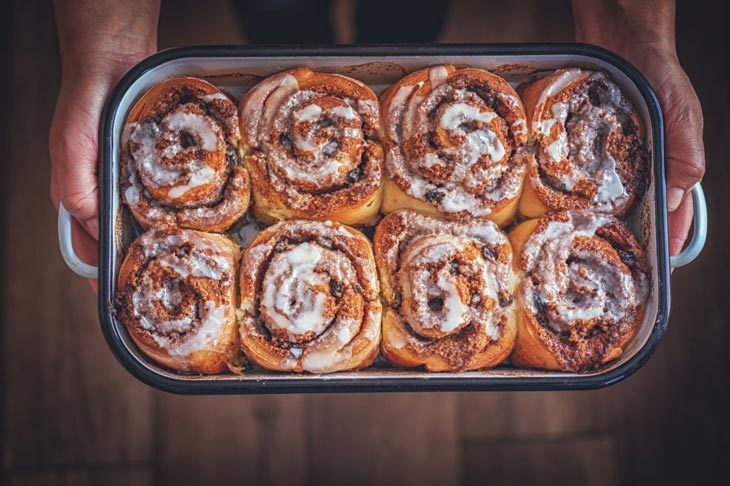 Cinnamon rolls are a fantastic sweet treat for breakfast or special occasions. Cinnamon rolls come with diverse flavors as the dough is lightly sweet, soft, and moist, and the fillings feature a sweet-buttery taste blending with the woody fragrance of cinnamon.

You wonder – why are my cinnamon rolls hard?

Let’s follow the below article to discover detailed reasons for your issue and a perfect cinnamon roll recipe.

Why Are My Cinnamon Rolls Hard?

Many reasons might make your sweet treats turn dry and tough. We will start to walk you through the five most prevalent causes, including overusing flour; overmixing the dough; using the melted butter; letting the dough rest in a bowl without oil cover; overbaking the sweet treats.

1. Do Not Measure Flour Correctly

As new cooks, you do not have enough kitchen tools, such as a measuring cup or kitchen scale. As such, you might measure the amount of flour in the sweet dough recipe for cinnamon rolls by eye, right?

As a result, you might use too little or too much flour. An excess amount of flour makes the dough dried out, leading to the tough rolls. On the other hand, if you don’t use enough flour, you’ll end up with dense and soggy rolls.

What else can cause tough cinnamon rolls? Your sweet treats might become too hard to enjoy because you over mix the cinnamon roll dough.

How to know if the cinnamon bun mix is well combined?

When the dough is pulling away from the sides of the bowl, touch it to test the stickiness. An adequately mixed dough is slightly sticky to the touch.

3. Use The Improper Butter Type

Another reason for dry cinnamon rolls is to use the wrong butter type.

Many cinnamon roll recipes call for melted butter for making the cinnamon filling. However, this butter type will not work well as softened, room-temperature butter combined with other ingredients.

Thus, in the subsequent baking time, let’s use softened butter instead of melted one as it helps to create a smoother filling that you can spread more evenly over the dough.

4. Forget To Raise The Dough In Hot And Oiled Bowl

Why are my cinnamon rolls dry?

Dry cinnamon rolls might happen because you do not place the dough in a clean and oiled bowl when it completes its first rise.

This extra step helps moisturize the dough and rise higher as it will not stick to the bowl. Besides, this step makes it easier to remove the dough after proofing.

A big mistake leading to dry homemade cinnamon rolls is overcooking them.

The best sweet spot for baking these sweet treats is 375°F (around 190°C). If you have set the oven temperature over that perfect spot or bake them over the required time, then do not be surprised when your cinnamon rolls become too dry and tough.

The baking time varies depending on your recipes; however, if you see the rolls feature golden brown, take them out and check for cinnamon rolls temperature using a food thermometer.

1. Use Bread-flour Instead Of All-purpose Flour

When it comes to suitable flour types for making this delicious dessert, all-purpose flour and bread flour are the most common options.

The main difference between these two is a matter of protein. The protein amount in bread flour is higher than all-purpose flour as it comes in white and whole wheat varieties.

What is the best flour for cinnamon rolls?

If you want softer and fluffier rolls, we suggest using bread flour instead of white flour. For substitution in your recipe for the yeast doughs, you can make a 1:1 substitute with a little extra water.

Usually, you cover the bowl containing the dough and place it in a warm spot for proofing, right?

That works great; however, if you have some time and want the cinnamon rolls to come out with a more complex flavor, opt for letting the dough rise overnight in the fridge.

A cold fermentation process enables the yeast to release carbon dioxide much lower, leading to a more robust taste.

Have you ever struggled with cutting the rolls using a knife? An improperly sharpened blade might squish your perfect cinnamon rolls and leave you with unattractive pieces.

How to cut cinnamon rolls properly?

It would be best to use a piece of dental floss to loop around the dough and divide it into small chunks.

After baking the rolls, you need to let them cool for 5 to 10 minutes before frosting.

That is because when you top the icing or cream cheese frosting on a hot sweet roll, it will melt and ooze out of them quickly. However, a gentle warm roll lets the icing flow slowly over the top and get in place before enjoying.

How to make perfect cinnamon rolls? Let’s follow our secret recipe for new cooks, and you can make delicious cinnamon rolls in the shortest period.

A small note here is to use the ingredients at room temperature. This helps to optimize yeast activity and butter to combine well with other components in less time.

Pour milk into a microwave-safe bowl and microwave it for 45-50 seconds.

Pour the warm milk into the medium bowl and sprinkle prepared dry yeast on top. Then, combine the yeast-milk mixture with sugar, melted butter, egg, and egg yolk.

After that, sift the flour into the mixture, add salt, and stir using a spoon until the sweet dough starts to shape.

To save your effort, knead the sticky dough using a stand mixer on medium speed for around 8 minutes or until the dough has formed into a slightly sticky bun.

In case the dough is too sticky, and you cannot take it out of the dough hook, add 1-2 more tablespoons of bread flour. On the contrary, it is too dry, add a little warm milk.

If you do not have an electric mixer, you can knead the dough by hand for 8-10 minutes on a dry surface covered with bread flour.

Transfer the sweet dough to an oiled bowl. Then, use plastic wrap and a warm towel to cover it. Let the dough rise in a place with a temperature between 75° and 95°F for one and ½ hours.

The proofing period might be shorter or longer depending on the humidity or temperature in your kitchen. The dough is ready when it doubles in size.

Place the sweet dough on a plat surface covered with flour. Then, roll it out into a rectangle with the thickness level based on your preference.

For instance, if you want bread-like cinnamon rolls, the rectangle should be ¾ inch thick. Or, in case you prefer a gooey and chewy version, roll out to only ¼ inch thick. Then, cover the dough with prepared butter.

Combine ground cinnamon and brown sugar in a small bowl. After that, use a spatula to rub the cinnamon roll filling into the dough, leaving a small section along one edge.

You might need to cut off about an inch off the ends of the dough as those parts might not contain as much filling as we expect.

Place the cinnamon rolls on a baking sheet or a baking pan lined with parchment paper. You also need to give space around 1-2 inches among the rolls to ensure they will not stick together when fully risen.

After that, cover the rolls with plastic wrap and a clean warm towel and let them rise again for around half an hour.

Preheat the oven to 375°F and remove the towel and plastic wrap. Then, bake the chunks for around 25 minutes or until they become golden brown.

Check the cinnamon roll temperature to ensure they are fully baked, and let them cool for at least 5 minutes before icing.

Mix the ingredients you prepare for the cream cheese frosting in a medium bowl. Then, beat the mixture until smooth and fluffy using an electric food mixer.