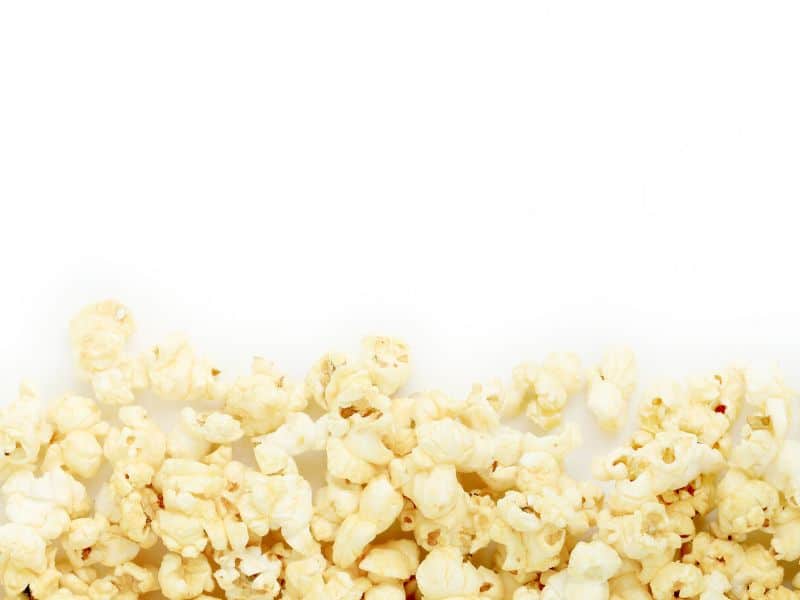 If you enjoy snacking on popcorn but hate when it’s chewy, I can help!

More than often, you think you followed the exact recipe to make popcorn, yet the results come out tough and rubbery. Read on down to learn how to fix chewy popcorn, as well as more facts about this snack.

Why Is My Popcorn Chewy?

Popcorn is a combination of tough starch and a little moisture. When the heat rises, the moisture becomes steam, and the pressure begins to build up until the kernel pop.

However, some wrong inputs such as salt, heat, and agitation or improper steam control can disturb this process, causing the popcorn to be tough and chewy.

1. Not Enough Oil or Using Too Much Oil

Remember an old kitchen fact that oil and water don’t mix. Instead, the oil coats the popped corn and then repels. It acts as a protective barrier and ensures the texture of the result.

When the oil is so thin, it cannot evenly cover the kernels when they pop. However, the oil must also be firm enough so that it won’t make the popcorn become a gooey mess.

Moreover, not using enough oil when you add butter, margarine, or butter spray will make the popcorn rubbery and less enjoyable to taste. Meanwhile, the oil has the benefit to repel the water in the butter.

Thus, not enough oil will make your popcorn soggy with a stale texture. So, how to keep the popcorn from getting soggy?

The advice is that you should drizzle pure, raw olive oil over the popcorn. It looks like lard, but it does really help.

On the other hand, how about adding too much oil while making popcorn? You will receive the same results, it seems to make kernels to drowning in oil, then slowly roasted in place of fully exploding as normal.

Many people ignore this ingredient without realizing its significance. The popcorn is absorbent, and the salt is a great factor to help the kernel explode properly to come out as a fluffy popcorn.

However, don’t use granulated table salt, you will still eat bland popcorn with all the salt waiting at the bottom of the bowl.

Instead, use popcorn salt, which is a very finely ground-like powder. The small particles will cling better to the oil on the kernel surface.

Thus, it will end up in your mouth instead of at the bottom of the bowl. But if you are using coconut oil, it’d be better to have an extra flavor shot from the salt.

3. Not Enough Heat And Agitation

If you heat the kernel unevenly, you will be burning just one side of the kernel. And instead of exploding, it will lose its strength and burst prematurely or not even explode at all.

It will end up like either an oil maid or a small “dud” kernel. Furthermore, when you heat the kernel too slowly, the kernel’s shell will leak out the moisture, and the starch will overcook.

Much as important as heat, agitation is a major factor contributing to the texture of the popcorn. If you don’t keep the kernels moving, the heat will not go evenly to each one.

And again, it disturbs the popping process and gives out the chewy popcorn.

When the kernels pop, they release a burst of steam. And what happens to the steam can decide whether the popcorn will come out crispy. You guess it right.

If you are using a popper, make sure it is well vented to leak the steam away and do no harm to the popcorn. The popper does not need to be expensive and high-tech.

Instead, it should ensure the popping process occurs properly. The steam should be able to escape, move past the corn and out of the pot.

More than often it’s fair to blame the quality of the popcorn. Actually, popcorn loses moisture as it ages. Thus, old popcorn will have more old maids and less enjoyable flavor.

Even when you follow the exact recipe and use the best popper, the popcorn will not be crispy in any way. So anytime you buy it, make sure the expiration date is not close.

How Long Is Popcorn Good For?

Like any other grainy snack, popcorn has its expiry date. But how long does popcorn stay fresh?

Naturally, the raw popcorn in packs may have an infinite date of use on the shelf. If you keep the unpopped kernels in a tightly sealed jar in a cool area, they should remain usable for a very long time (Indefinitely).

However, the time lapses when you pop it out. Due to the added moisture that makes the kernel burst out, it squeezes down the popcorn shelf life, making the food go spoiled in only a few weeks.

How To Avoid And Fix Chewy Popcorn

It’s fun to listen to the popping sound when you put a popcorn pack in the microwave. Do you know what causes the hull to extend its size?

There is a micro droplet inside the kernel wrapped by the hard shell of the seeds we can see on our hands. When you add heat via microwave or a hot pan, it steams up this liquid and builds pressure that explodes the fluffy part.

If you’re looking for the question “why isn’t my popcorn popping“ it’s because the popcorn does not have enough moisture or the heater is not use the correct temperature to pop it.

While plain air-popped popcorn can be boring, people seek to add flavor to the food. There are various options of taste to make perfect popcorn and more delicious besides the already seasoned pack in the stores. Here are a few:

Crushed basil or oregano with some chilly powder will make your bowl of popcorn hard to resist. Simply toss the mixture into the hot popped corn and mix them evenly.

For huge fans of olive oil, it is possible to drizzle your dish with a tablespoon of the liquid. You can sprinkle the pan with your favorite seasonings and mix until you like its taste.

It’s hard to resist the sexy bite of the hard, salty Parmesan cheese in your popcorn. One tablespoon of the ingredient will elevate the tasty level for this very ordinary snack.

You might have cursed the dud kernels that wouldn’t pop its fluffy content out. But here is this little “hack” you can apply to puff the hulls. Fill the bowl with kernels, then soak popcorn kernels in water and let them soak for 10 minutes.

Thereafter, drain out the water and start to pop the seeds. You may notice the yielding time of the wet corns is faster, and it produces fewer duds. Some pieces are noticeably fluffier than the dry ones.

If all above cannot satisfy you, why don’t you try to follow my below checklist to ensure the air-popped popcorn comes out fluffy and crunchy:

How To Make Homemade Popcorn

Most of us enjoy popcorn while watching movies, moreover, it seems a healthy snack because basically, it is a whole grain. But not many cares about how it’s made. So, popcorn is a crop bred to have the greatest pop-ability.

It has moisture content drained in a giant bin that pumps warm air to dry the seeds until it leaves about 14% wet in the kernels.

These corns continue going through a purification process to sort out the optimal pieces that pop the best.

People also figure out how to make air-popped popcorn taste delicious by adding flavors to the food. The best-tasting popcorn is typically up to one’s most preferred seasonings.

If you are craving a snack, you can make quick popcorn in the microwave. But can you make microwave popcorn on the stove?

Technically, YES. You will need a large pot with a lid and some oil, flavors of your taste. Set the stove at medium heat, pour in the crop, wait for a few minutes, and you’re good to go.

Have you heard of popcorn without a hull? Hulless popcorn is a kind in favor of those who are with sensitive gums. The pain-free snack with no husk won’t stick to your teeth.