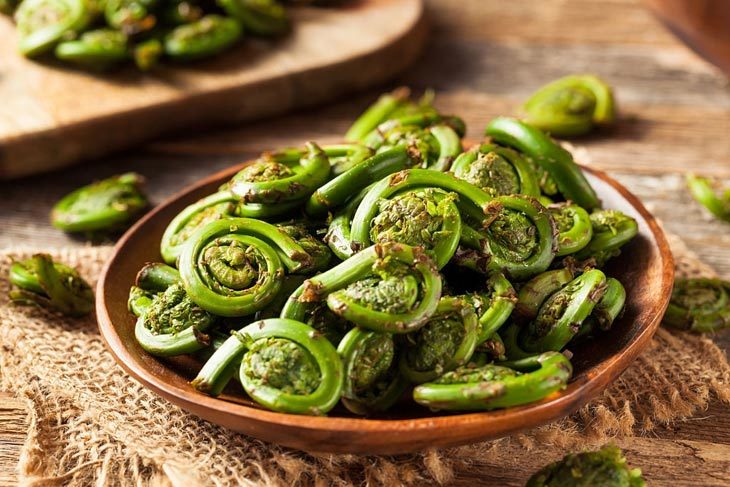 In this article, we will guide you on how to clean fiddleheads – one of the most exotic vegetables that you may have never tasted before! It is important to clean them properly, to have a delicious, fresh meal.

What Is a Fiddlehead?

So, what is fiddlehead? Fiddle head is a special, edible kind of Ostrich Fern. It looks like a seedling but with a dark-green curly head. When harvested, they turn into a complete spiral shape.

Unlike any other fern that grows in a particular amount of time then dies, fiddleheads’ youth period is when it has the most nutritional value included, making it edible.

Fiddleheads grow mostly in spring, making these green veggies a spring alarm if you have them in your garden. However, fiddleheads have a short season, so it’s expensive to purchase these greens.

Fiddleheads’ taste is quite like the mixture between asparagus and broccoli, but of course, it has its exotic taste that you can only find while eating. If you are a fan of winter vegetables, fiddleheads may be your next favorite green veggie!

These spiral veggies contain a great number of minerals like potassium and vitamin C. Now that we have known some about fiddleheads, let’s move on to our main part: how to clean fiddlehead ferns and serve them?

How To Clean Fiddleheads?

Since fiddleheads are such a delicate, delicious vegetable that you don’t want to miss in your dinner, it’s best to follow these instructions on the best way to clean fiddleheads:

Among your newly harvested fiddleheads, there may be some fiddleheads with brown, papery or long, ill husk. They may wrap around the fronds and have different colors compared to the wintergreen of the fiddlehead.

If you inspect these at the ends of the fiddleheads, cut them off and keep only the green veggie part. Cutting these extras beforehand will save you time cooking after cleaning fiddlehead ferns and refraining more strain coming out from the fiddleheads.

You should place all of your fiddleheads in one bowl and run them through the water at least two times. Contrary to how fresh fiddleheads are, they are still full of natural dirt and debris from the ground. Running them through cold water generally helps wash away any existing dust, dirt, bugs, and more.

After thoroughly rinse fiddleheads under the faucet, you can soak them in water (with a bit of salt) to entirely remove the unseeable dirt in 10-15 minutes. Once you finish draining them, you should find a beautiful dark-green color on all of your fiddleheads without any dark spots and patches.

After cleaning fiddleheads with water, they need to be dried out properly; otherwise, the remaining water can pose a serious threat to fiddleheads infected by environmental bacteria.

There are two ways to dry-clean the fiddleheads. The first simplest way is to use a dry, clean towel and pat dry all the fiddleheads. You can spread all fiddleheads onto a flat surface and use a towel to dry them. If you see any fiddlehead with dirt, get them to clean one more time or discard it if you find the color is too dark. Once you finish pat-drying, place them in a dry bowl and get them ready to cook!

The second way is more complicated, but it helps your fiddleheads dry more naturally, remaining their natural flavor. Once your fiddleheads are clean, put a rack on top of that bowl and turn the combo upside down.

Without removing the bowl, keep the rack in a high place where water from fiddleheads can naturally drip down, and shake it to get the moisture out. Then, remove the bowl, let your fiddleheads sit on the cooling rack for a few more minutes, and you have finished drying your fiddleheads.

That’s all the steps you need to clean fiddleheads. But besides cleaning, there are much more things you must know to have delicious fiddleheads to eat.

How To Store Fiddleheads?

Like how to store bean sprouts, fiddleheads also need to be stored in a cool environment. The best place to store fiddleheads is in the fridge, where you can keep the fiddleheads fresh for a maximum of 5 days after harvesting or purchasing.

You can join fiddleheads in the vegetable container in your fridge; however, make sure that that container is breathable with continuous airflow. An airtight container will refrain fiddleheads from “breathing,” Eventually, they won’t stay fresh during your storing fiddleheads time.

If you ask, “Can you freeze fiddleheads?”, the answer is yes. Once you want to preserve your fiddleheads after five days of harvesting, the only solution is to freeze them and put them in an airtight container. Freezing fiddleheads can make the veggie last up to one month.

However, after thawing the fiddleheads once, you cannot freeze them anymore, so you are odd to use them all up when thawing. It’s the same as knowing how long are artichokes good for before you thaw frozen artichokes and boil them into tea.

Are Fiddleheads Safe To Eat?

That’s why cleaning fiddleheads beforehand is the most important step in ensuring that you don’t get food poisoning from this plant. As fiddleheads are fern-like, many people often assume them as inedible and poisonous.

However, there has not been any conclusion on the actual poisoning factor in fiddleheads. As long as you cook fiddleheads, it’s best to devote your time and effort to preparing fiddleheads properly before cooking.

How To Cook Fiddleheads?

To begin cooking fiddleheads, it’s best to simmer them in hot water for 6-9 minutes to remove the bacteria and dirt that we can see.

If you go for simple, boiled fiddlehead dishes, you can season them with seasoning ingredients like onion, garlic to bring up the taste while they are blanching. Make sure not to overcook the fiddleheads by letting them stay in the heat for too long. We want medium-well fiddleheads for the taste to be most delicious and enjoyable. That’s how to blanch fiddleheads.

Another suggestion for fiddlehead dishes is to put them in a pan and add summer vegetables like tomatoes, potatoes, etc., to make a vegetable-party salad. Other than that, utilizing fiddleheads as a garnish in your protein entrée is a great idea too.

The vibrant green color will pose a beautifully appetizing contrast with your fish or pork. And that’s how to cook fiddleheads safely.