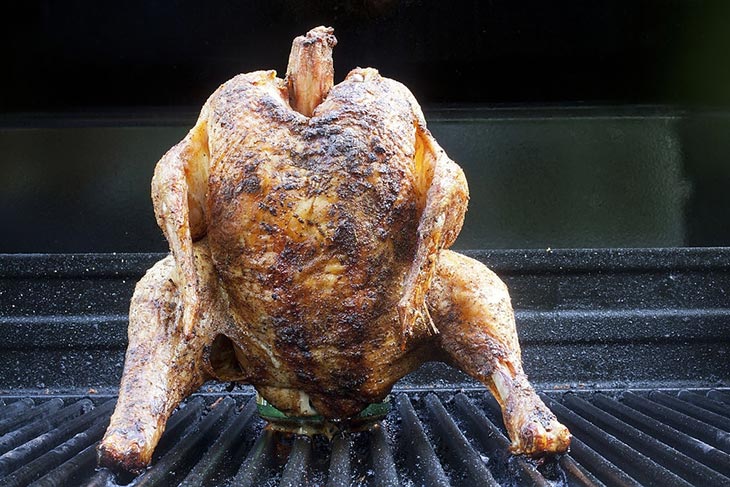 Beer can chicken may seem like a crazy way to cook a whole chicken, but hear us out… it really creates a moist, flavorful bird on the grill without much effort.

If you are concerned about a “beer taste” being added to the chicken, don’t worry. The chicken will not taste like beer.

What Is Beer Can Chicken?

Cooking a whole chicken on a grill may seem impossible without a rotisserie spit. However, one way you may not know of is through the use of a beer can.

So, what exactly is beer can chicken? Some other cultures may call it drunken or dancing chicken, Coq au can, beer butt chicken, or chicken on a throne. All these terms mean the same thing: a whole chicken sitting on a beer can over indirect heat.

Indirect heat can be achieved on a grill by lighting the burners on one side, and placing the bird on the other.

You begin by placing the beer can into the animal’s “bottom” cavity. The beer inside the can will provide moisture and a little flavor to the meet. It also helps the bird stand up, so it cooks more evenly.

The full recipe is below.

The Best Beer Can Chicken Side Ideas

Below are some of the best quick and easy side dishes for beer can chicken, with their recipes.

There are many methods of cooking asparagus to be a side beer can chicken:

This is my favorite side – with roasted chicken or not.

Combine this mixture with the potatoes and mayonnaise without getting the potatoes and eggs crushed. Adjust the taste with lemon juice or salt if you want. Serve immediately or store in your fridge for later use.

The Best Beer for Beer Can Chicken

The best beer to use would be a cheap, light beer. This means Coors Light, Miller Lite, Busch, Keystone… something cheap with little flavor.

You wouldn’t want to waste a premium beer on this recipe. The flavors from the beer simply won’t make a huge difference in the final taste of the meat. Oh, it would work, but I’d rather drink a good IPA or stout instead of wasting it on this.

In a pinch, you could always use a pop can, or an empty can of vegetables. Empty the can out, give it a good rinse, and fill it halfway with water. This will do basically the same thing.

How To Cook Beer Can Chicken

Ok, now you have your sides ready. The next step is to get that bird on the grill.

After the preparation is complete, cook it via one of the following two methods:

Preheat your oven to 375°F. Place the prepared pan with the chicken can on top inside. Next, bake until the chicken reads to 165°F. It should be around 45 – 55 mins.