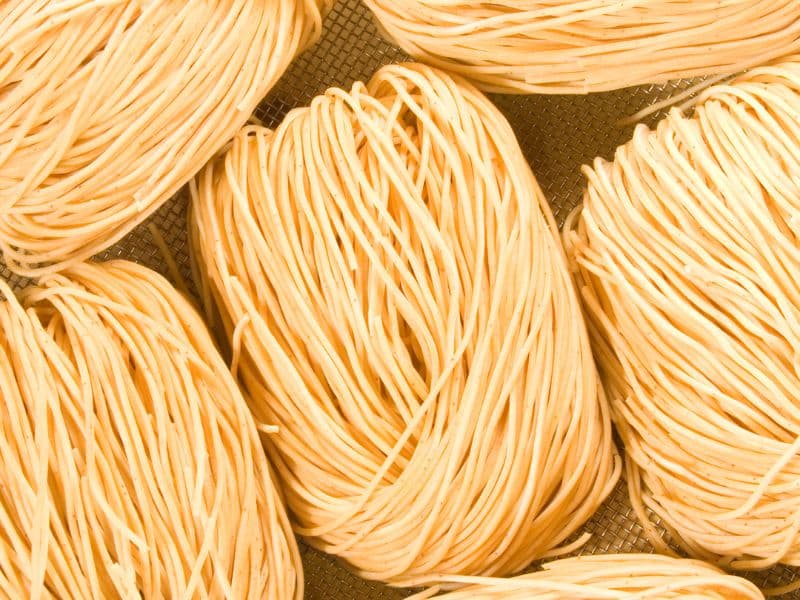 Given that fact above, egg noodles are a nutritious and delicious meal for people of all ages, with different flavors created because of its neutral taste.

However, suppose you don’t have any egg noodles in your kitchen, but still want to have a noodle dish for a meal, what should you do now?

Therefore, it’s necessary to know an egg noodle substitute to help you find out which is the best for your cooking.

How Does an Egg Noodle Taste?

Egg noodles must be the most commonly-used noodles that are popular worldwide.

Made from wheat flour and egg (of course!), boiled in water and cooled down to thicken the strips, egg noodle derives the egg flavor and light yellowish color from the major ingredient – eggs.

Typically, the egg noodles are rolled thin and cut into slim strips, making its texture quite tender and saucy.

Given these facts, thin egg noodles are suitable for almost any customer group, from hard-to-serve children to unsalty-preferred adults. When fall comes, the soft, savory egg noodles are favorable as a side dish.

Breaking down the nutrition, we can see that egg noodles are a nutritionally-rich meal that contains various elements.

There are 146 calories, 32 mg of cholesterol, 27g of carbohydrate, and 5 grams of protein in this type of noodles.

The fat percentage on a serving cup is just 18 calories over 146 calories of the meal in general, meaning this food is an excellent option for people of different health statuses and ages.

Moreover, it is the best option for people on a diet but still loves eating noodles because the calories are low, and the fat percentage is insignificant.

Let me introduce you to the most commonly-known noodles in the culinary world – fettuccine – the best substitute for egg noodles.

At first glance, you can mistake the Fettuccine for linguine because of its thin, long texture. However, the noodle is actually flat and wider than linguine but slimmer than tagliatelle.

Fettuccine is made of wheat flour, rolled into pasta dough, and cut into smaller strips. It sounds just like other types of noodles, right? You guess it right, so the only factor in differentiating it from others must be the wide, flat strips.

Because of the similarity in origin, fettuccine and egg noodles are quite similar in terms of flavor.

Thus, it can be a suitable substitute for egg noodles. Besides, fettuccine goes well with alfredo sauce, cream, butter, and cheese as a side dish.

Linguine is called “little tongues” because of the lengthy strands just like spaghetti, but what makes it distinguishable is its flattened two sides. Compared to fettuccine, it is flatter, and to pasta, it is narrower.

The greatest feature of linguine is its tender texture. It becomes a good complement with all kinds of meat with such fragile strands, from pork, beef to chicken meat, and egg. It’s all good to combine!

Traditionally, the linguine is almost similar to the egg noodle, meaning it works as an excellent substitute in any egg noodles recipe.

However, because of the thin strips of linguine, we still prefer you to cook it with light sauces to coat each linguine strand fully.

In common, the most preferred seasonings to use with linguine are pesto, oil-based dressings, and light tomato-based sauces. Seafood is another suitable pairing.

The ribbon pasta, which is, in fact, the flat-stranded pasta, is traditionally served with cream sauces and seafood. In fact, there are many types of ribbon pasta, varying in lengths and thicknesses.

In the culinary world, ribbon kind is classified into two types: dried and fresh. While the dried ribbons and the rich, thick sauce are a match made in heaven, the fresh ribbon type matches exceptionally well with more delicate sauces.

Ribbon pasta and egg noodles are pretty the same in terms of taste and texture.

Both are tender, soft, and easy to defrost. That being said, ribbon pasta – a great egg noodle substitute is enjoyed in meals. To add-in, pesto and basil are two ingredients that go best with the ribbons.

Another substitute for egg noodles is Lasagna – the most impressive noodle because of its wavy and wide strand.

The term “lasagna” refers to the combination of noodles and cheese. That being said, it’s like a “tradition” to layer lasagna with cheese.

Typically, the lasagna is 2 inches wide and 13 inches long, bigger than other noodles. Therefore, this special noodle is usually not considered a pretty good substitute for egg noodles. However, that’s such a loss to remove it from this list.

The taste of lasagna is often bland and unfavorable, making it a good combination with any ingredient and any sauces. To add-in, the wide strips of lasagna may make you stereotype it as rough, but in fact, it’s really tender.

Even if you freeze it in the refrigerator for a long time, the taste remains. However, the lasagna shelf life only allows for about 3 to 5 days of use, so please be aware of this.

Ending this list is the most famous pasta – spaghetti. The term “spaghetti” means “little twine,” which refers to the noodle’s wavy form when being cooked.

Compared to other pasta, the spaghetti has the thinnest strips, resulting in its soft texture.

When putting egg noodles and spaghetti on the comparison, it is obvious that they are almost the same. Needless to say, it is the most identical recipe for egg noodles.

What about the flavor of the spaghetti? Well, it tastes quite bland, so the spaghetti isn’t served alone, but it’s more likely to cook with olive oil or tomato sauces.

Typically, the common dressing to make with spaghetti is to cook sausage because the rich, fatty taste of the sausage will complement the unfavorable flavor of spaghetti.

We have gone through a list of the most common substitutes for egg noodles and point out each of the egg noodle substitute features so that you can select the most appropriate one among these fives.

Personally, we prefer the lasagna over others because it can be a good combination with cheese, which most young people love to enjoy!

Have you had a preference for your meal yet? We hope this post has helped deliver the answer to your question!