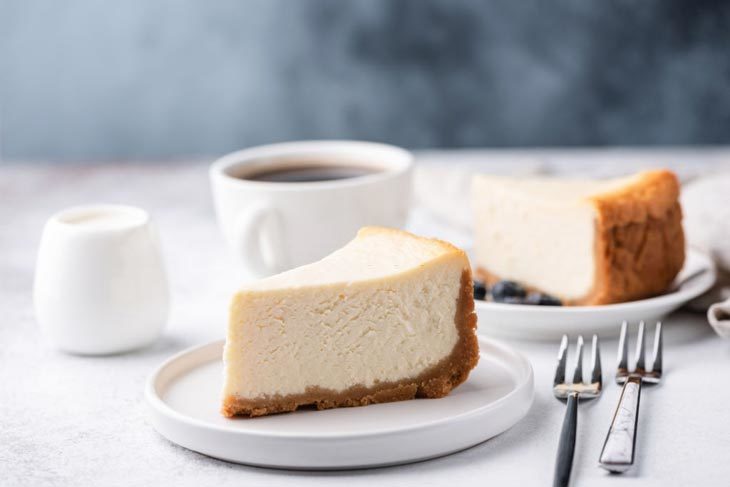 Cheesecake is one of the most popular desserts to make and eat! It is a creamy dessert that can be made in a variety of flavors and styles. If you have ever been to the cheesecake factory, then you know what I mean.

Scroll on down to learn about cheesecake as well as the different types you can find it in!

How Long Can Cheesecake Sit Out?

Answer: A cheesecake can sit out max. 5 hours at room temperature without changing taste. But it can be last for a week with proper storage method in the fridge and maximum for 8 months in a freezer.

Use our chart below to find how long you can store a cheesecake using various methods.

According to this chart, if you want to know the time of a cheesecake can be left out, you should check your kitchen temperature and the weather in your region.

In general, the cheesecake can sit out about 5 hours at 65 °F (in the kitchen temperature before putting it into the refrigerator). This period also depends on the state of the mixed ingredient in the recipe.

How To Tell if Cheesecake is Bad?

Fresh cheesecake usually has a creamy surface that has a yellow color and a fixed moist level.

While bad, rotten or spoiled cheesecake has a dry wrapper and the surface, as well as the edges, have a tan or a dark brown color.

How to Extend the Shelf Life of Cheesecake

After knowing how long cheesecake can sit out, you should realize the method of storing your cheesecake to keep it for a long period.

Make sure your refrigerator temperature is 40 °F when taking your cheesecake, with a careful cover around the cake.

By doing this, you will prevent bad smells from the refrigerator, potential bacteria, and the drying of the cheese surface from the cold temperature.

Freezing your cheesecake is a good idea if you want to keep the quality of the cheesecake and increase the expiration gradually.

Cheesecakes could be made of Havarti quark, ricotta cheese, and cream cheese. Other ingredients to make a delicious cheesecake are sugar, eggs, cream, and fruit.

This is the main reason why there are so many types of cheesecakes due to the numerous recipes you can make, which is unlimited.

Someone will not recognize the difference between an old cheesecake and a New York style cheesecake. An old version cheesecake of the American style made from cream cheese only, and it was invented by James Kraft in 1872.

However, the New York style cheesecake does not only have the cream cheese ingredient but also it has other ingredients in the recipe such as heavy cream, eggs, and egg yolks to build the smooth frequency.

Chicago style cheesecake is made from another version of the cream cheese that has been created by Eli’s Cheesecake. This style has firm on the outside and creamy on the inside from the cheese to other ingredients naturally.

Pennsylvania Dutch-style cheesecake is made in a cottage cheese that has more curds and reduces the water content in the cheese.

That being said, the sour cream cheesecake was made in American in the mid-20th century with cream cheese, but it had not a heavy cream content in the recipe.

Nonetheless, this style has a different recipe than the New York style cheesecake, and the cream cheese needs to be frozen in a short period of time without destroying the inner elements.

Some bakers also want to make a different cheesecake by using bay leaves as a protecting substance. In some main areas of Rome, the Roman style cheesecake still served as the traditional cuisine.

French style cheesecake made with gelatin as its certain ingredient and this cheesecake is quite light (about one or two inches in height).

Bakers usually use the cheese in the South of France to make this style, so you will know more about the cheese types of French.