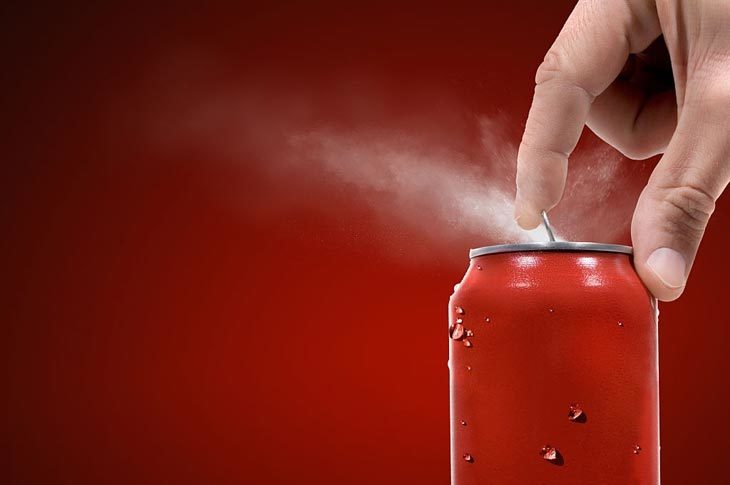 Soda is a versatile beverage that is widely used in many households. Not only is it good to drink, but it also works well in cooking and leverages the taste of some ingredients like pork, beef, etc.

However, one of the biggest problems with soda is that it can turn flat easily and quickly. Thus, it is a must to learn how to keep soda from going flat.

How To Keep Soda From Going Flat

Theoretically, in room temperature conditions, the solubility of a substance is proportional to the pressure of the air surrounding it. In other words, the higher the air pressure is, the higher solubility is.

As a result, when you open a newly bought soda bottle, the air surrounding it will be released quickly. That being said, the more air comes out, the lower the pressure is. And that air is called CO2, or carbon dioxide.

When CO2 releases, the air inside the bottle will be replaced by O2, making the solubility and the air pressure that makes bubbles and gas gradually disappear. If you are asking, “How does soda go flat?”, then this is the answer for you. Given those facts, learning how to unflatten soda is what you should start with right now.

However, please keep in mind that regardless of which approaches we use, the gas will still go through the bottle and slowly dissolve, so our methods are just the ways to slow down the flat turning process.

The first method we want to recommend is to refrigerate the soda. As mentioned above, the soda will become flat if all gas and bubbles dissolve. Specifically, the gas is made from CO2, which can diffuse slower in cold temperatures.

Therefore, to keep the soda from not turning flat, the first step is to lengthen the CO2’s solubility period. The way to do that, scientifically, is to keep it cool or refrigerate it.

In short, the longer you keep the soda in cold temperature, the longer the gas, bubbles, and CO2 can remain.

Lock Up The Soda

Next, let’s go to the next method on our guidance of how to recarbonate soda: lock it up. Yes, you didn’t misread. We said, “lock the soda up.”

To be specific, right after using the soda, you should put on the lid, lock the bottle up tightly, or almost airtight is better. With this method, you will prevent the gas release into the environment through the bottle’s mouth. As a result, the amount of gas will not be wasted, keeping the soda from going flat.

We recommend you ask someone to lock the soda airtight, but only twist the lid once; otherwise, your bottle will be so airtight that you may not be able to open it again.

Here is a tip for locking the soda: first, put on the lid. Then, swirl the lid for about three to four rounds until you find it attached tightly to the mouth of the bottle. Then, ask someone to do, or do by yourself: turn one more round with your strongest forces to lock the bottle up. Only once is enough!

Here is the method that you can only use when the soda bottle remains half because we will squeeze soda bottle and pressurize the liquid powerfully.

Let me specify what we will do: when the soda contains only half the bottle, put on the lid and lock it up tightly. Next, squeeze and twist the bottle as much as possible to release the air from inside to outside.

You may wonder how the air could come out when we already close the lid, right? In fact, the air can still be released to the environment through the plastic bottle and the mouth, but insignificantly.

Therefore, by squeezing and twisting the bottle strongly, you push the air from inside to outside, remaining the space for carbon dioxide and the air pressure. As a result, carbon dioxide will stay in the bottle much longer, making the gas stay longer.

If you are asking, “How to prevent soda from going flat?”, then keeping it cool is a good method we want to suggest. The low temperature will slow down the process of dissolving bubbles and gas.

Therefore, we have come to the idea of refrigerating soda. However, it was not enough. Suppose you are in the summer camp or the middle of the park, so there is no refrigerator available. What should you do then? There is another way to keep the soda cool: add ice cubes to it.

You can find ice cubes in any convenience store or supermarket at an affordable price. It can cool the soda and slow down the process of dissolving the gas.

Hence, this is a logical and suitable approach for those in an emergency to keep the soda from going flat but don’t have a refrigerator.

Besides the four methods mentioned above on how to keep soda fizzy, another approach is to keep the gas, but not in the “gas reserving” way. We will add more gas to the soda.

Specifically, you should buy some fresh, fizzy coke with lots of gas. Then, open the soda bottle and pour the newly-opened coke inside. The soda and coke will blend in and provide a new taste, but not significantly different from the coke’s taste.

As a result, the soda will have more gas and remain frizzy as you demand. In case you want your soda to remain neutral as it usually was, we advise you to choose neutral taste coke like 7Up or Sprite.

If the drink has already lost its fizz and you are finding how to revive flat soda, then adding fresh coke is also a good approach for you to try.

If you work as an event organizer, or hotel workers, or any job that requires you to keep the soda frizzy frequently, we advise you to buy a fizz keeper pump cap.

What is a fizz keeper, anyway? In short, it is a device that preserves the carbonation in soft drinks. The fizz keeper contains a small hand pump screwing over the top of a plastic soft drink bottle in terms of structure. This pump will add carbon dioxide into the bottle, pressurizing the drink and keeping it fizzy.

Therefore, if you are seeking how to keep soda carbonated, using a fizz keeper is also a good option.

Turn The Bottle Upside Down

Let us help you explain the case. In short, when turning the bottle upside down, the soda will flow down near the cap while the gas will flow in the opposite direction – the bottom of the bottle. That being said, there is no way that the gas will escape the bottle now (because the gas escapes through the soda bottle pressure cap and the mouth).

Therefore, the gas will be kept at the bottom of the bottle, making the soda fizzy as new.

In general, we have learned seven different approaches on how to keep soda from going flat. Each way has its strengths and weaknesses, and you should evaluate your condition at the time to choose the proper method.

Personally, we prefer refrigerating the soda since it is easy to do, and we love tasting the cold soda afterward! Besides, we see that refrigerating is also the most effective way overall.