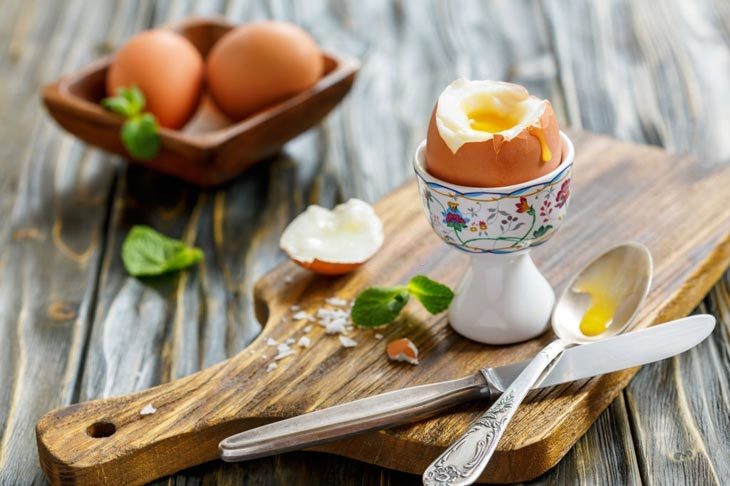 Egg is one of the most used ingredients, such as spaghetti and egg noodles. As well as being added to recipes, eggs can be made in a variety of ways like a poached, sunny side up, hard-boiled and soft-boiled.

A soft-boiled egg is undoubtedly a nutritious and healthy breakfast, but it’s also the trickiest one to open.

We have lost count of how many times we accidentally opened the eggs too deep and ruined the egg shape! If you’re still confused about how to open a soft-boiled egg, take a look below.

How To Open A Soft Boiled Egg? 5 Ways That Work

One extra-large egg has two parts: the important part – the gooey yolk – contains most of the vitamins, minerals, and half of the protein of an egg, and the albumen – the firm whites – contains the remaining protein and water.

There are many ways to cook an organic egg, but soft boiled is one method that retains most of the egg nutrients.

A perfect soft boiled egg will have a white “coat” covering a runny, sticky, and viscous egg yolk. Due to the breakable cover, to open a soft boiled egg requires carefulness, meticulousness and a proper method to maintain the perfect rounded shape of the egg.

If you want to know how to open a boiled egg, prepare your perfect egg, and follow our step-by-step guidances:

The simplest way to open a boiled egg is by tapping the blunt end of the egg. You can use a metal or egg spoon to tap the egg. Give it a few taps to see the open lines of the egg. Then penetrate the egg with your spoon lightly and open the egg’s shell. This way can easily get the runny yolk.

Whacking the egg means using a butter knife or a table knife to hit the eggshell. This way is more adventurous but shows off your cooking skills pretty well.

Simply use a small table knife to hit the side of the egg once quickly. After the knife cuts through the shell and the egg, you can open the top of the egg and remove the knife.

This method can be messy if your force is too strong, so controlling your strength is the most important part.

This method is another version of whacking an egg. Instead of opening the boiled egg with one decisive hit, you can use a sharp knife to tap around the egg’s shell.

Another way to cut through the shell and the whites to reveal the jammy yolk is using a soft boiled egg cutter or scissors. This tool is designed specifically for this task, so there won’t be any small shell pieces left. Simply scale the egg scissor onto the egg.

Once it is fit, press the handle and the teeth inside the rings to easily open the eggshell. You can also use a soft boiled egg opener or an egg clacker, which works the same way.

Lastly, this method is for soft boiled egg lovers who prefer a perfect cut-through egg. This German tool is convenient for opening the boiled egg and reaching straight away to the jammy yolk.

What you need to do is place the egg topper on top of the egg. Then hold the base of the tool while pulling the knob upward. Then release the knob to create a force that helps open the egg perfectly.

Now that you have opened your perfect soft boiled egg, you can put it in an egg cup and serve hot with toast. You can also make other egg recipes such as spaghetti, freeze egg salad, or bacon bread.

Before learning how to remove the shell from soft boiled egg, you need to give the egg an overall look first.

Usually, when opening organic eggs, we choose the pointy egg end, the easiest place to break. The reason is organic eggs always have an air pocket inside. This is due to the change of temperature when they don’t share the warmth of hens.

As they cool down, the material inside the egg will be shrunk, leaving a small oxygen air sack. Therefore, if we open an organic egg at this air sack, the internal round shape will remain.

Normally, the pointy end of organic eggs is quite notable under our bare eyes. Sometimes, some eggs can be very symmetrical on both sides, making it difficult to determine the blunt end.

The most effective way to know the place of an egg’s air pocket is by putting it under the light. This method is also commonly used by farmers to predict the hatching day by checking the egg’s inside.

To perform this, you need to go to a dark room and prepare a lit-up candle. If you don’t have a candle, you can use a LED light for this. Next, place the egg at the light source and cup your hand around it to see clearer. Once the inside is lightened, you can easily see the air pocket to open it.

How long does it take to soft boil an egg?

To achieve the best result, you should not rapid-boil an egg but instead, boil it over medium heat to give the eggs enough time to process. You can determine the egg result by calculating the time to gentle-boil an egg.

The ideal time to make a soft boiled egg is around 4 – 8 minutes. Depending on the jammy yolk you want, the result varies from super liquid gold yolk to half set yolk. 4 mins for a runny yolk and 8 mins for a jammy yolk.

After 8 minutes, the egg will be firm and fully set. Therefore, as soon as the egg is in boiling water, you need to set your timer to get a foolproof result.

How do you peel a soft-boiled egg without destroying It?

Before learning how to peel soft-boiled eggs without destroying the egg, you need to achieve the right temperature for your egg white to be firm enough for peeling.

Once the egg is good enough, you must remove it from the instant pot of water and transfer it into a bowl full of cold water or an ice bath. Under the impact of hot water, the eggshell will be extremely sensitive.

Let it sit until the shell is cooled down, drain the ice water bath or remove the eggs with a slotted spoon or small handheld strainer. Now the egg would be ready for you to peel.

You can also peel the eggs under running water, as it can wash away other flecks of shell.