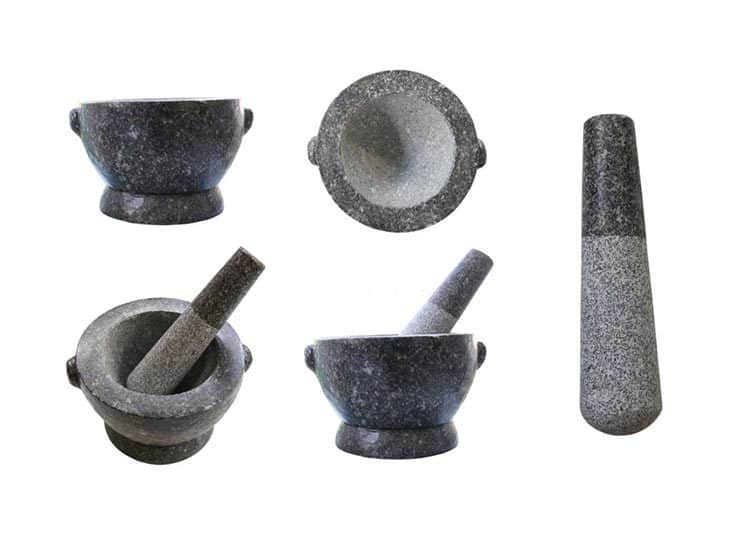 Mortar and pestle seems to be a super common tool in any typical household. These two always go in combo; without one, another one will be useless.

They are cheap, easy to find in any store, and versatile enough for many kitchen tasks.

However, suppose that you are planning to use them for the upcoming meal, but then you realize that they are missing? Do you know of any mortar and pestle substitutes available?

Don’t worry about it, we have tons of solutions that can help you out. Let’s read this post to find out!

Top 10 Mortar And Pestle Substitutes You Can Try

In short, these two tools don’t share the similarity in structure. However, in terms of function, they provide the same objective.

While the mortar and pestle is used to smash big, hard things into soft, smooth powder, the coffee grinder also uses its tiny-but-sharp burr to divide ingredients into the small ground.

Just take the coffee ground as an example, and you will understand.

Therefore, a coffee grinder can be used as a mortar-pestle substitute. However, there is just one reminder: only put dry, hard food into the grinder. The grinder only smashes well when the ingredient is in that form.

Given that fact, the spice grinder can grate the herbs and spices into small, smooth parts. And that is what to use a mortar and pestle for, right?

Therefore, the spice grinder can work well as a spice mortar and pestle replacement.

To add-in, we suggest you use a spice grinder only for dry spices like chili, coriander, pepper, cinnamon, clove, etc. Garlic and ginger are not available to this tool.

Compared to the two tools mentioned above, the rolling pin seems different and incompatible. However, it can become a mortar and pestle replacement just like them.

To be specific, a rolling pin works well in crushing and smashing food from a liquid, hard form into small pieces.

You can see that the pin is small and weak, so if you use it to chop ingredients, you have to use stronger power. Besides, rolling pins will make your place messier, so there is a need to clean up.

Meat hammer is the most compatible substitute for mortar and pestle. From the structure to the size, they both share lots of similarities.

Specifically, the mortar and pestle’s mechanism is one as a bowl for crushing herbs; the other will crash the food into the ground or small pieces.

And the meat hammer, with its sharp, tiny saw tooth and big surface, can also smash food in the same manner, right?

Typically, we will use a plastic Ziploc bag or bowl to crush spices to put the food and use a meat hammer to crush them.

In some cases, we find that the Ziploc bag works even better than the mortar since the plastic bag won’t be torn.

The empty bottle is another suggestion on the list. In short, we think that an empty bottle can provide enough force to smash and crush any food, especially herbs and spices, into small pieces.

Suppose that you want to crack the herbs, spices, or any seasoning for the meal. Still, if you don’t have any of the above tools, especially no mortar and pestle, then having an empty bottle.

Putting the food in a plastic Ziploc bag (or bowl used to crush herbs), and using the bottle to smash the food powerfully is also a good substitute approach.

However, we suggest you not use crystal bottles for this purpose. The crystal objects have always been known as fragile, easy to break.

Therefore, it is illogical to let such crystal, fragile objects as things to use a mortar and pestle for, right?

If you don’t have a grinder, mortar, pestle, and a firm, not-crystal bottle, then a big, heavy pan is also compatible with substituting in this case.

Typically, we use a heavy, big, iron skillet to pound spices and herbs into small pieces. Compared to other tools mentioned in this list, the big pan may not be the most effective.

However, in an emergency case, it is still usable to crush the small spices and herbs.

When choosing the pan to blast, we realize that the skillet’s back must be firm and thick. The skillet with that back will usually be heavier than others, making them provide stronger forces when smashing.

You may wonder why we mentioned coffee mug – a fragile, crystal object on the list of mortar and pestle alternatives.

We don’t miswrite; we definitely believe that, if properly used, the coffee mug is an appropriate alternative to mortar and pestle.

To be specific, a coffee mug and empty bottle share the same function in smashing food. They are weighty enough and able to provide powerful forces to crash small herbs and spices into pieces.

However, just like the empty bottle case, when smashing the mug, most of which are made from crystal, there is a high chance that you will break the mug into pieces after a few smashes.

Hence, we just use the coffee mug to break herbs and pieces in case these seasonings are small and soft.

Mixer grinder is a widely used tool in most households nowadays. This device is affordable, versatile, and helpful in most kitchen tasks.

Similar to the coffee grinder and spice grinder, the mixer grinder has a sharp blade to cut food, especially herbs and spices, into small pieces.

Moreover, most mixer grinder is designed to handle thick and rough food, so the engine’s power and the sharpness of the blade are higher than that of the coffee grinder and spice grinder.

Therefore, we can smash more food with a mixer grinder. Additionally, it can blast wet herbs and spices such as garlic and ginger.

We did mention using the Ziploc bag many times above, since this plastic bag works well as a “container” for herbs and spices.

When smashing the food, they can be scattered everywhere, right? So, having a Ziploc bag to put them before crashing is a good way to keep food clean and hygienic.

You don’t need a mortar to smash food into pieces; you just need something heavy to provide enough force on the food that it will break into pieces.

So, just take any weighty object and use it as a “smasher” on the food. You can have the grind herbs or spices you demand.

Finally, we want to suggest the blender. Just like the spice grinder and the blender, with its sharp blade and powerful engine, it will cut off any spices and herbs into small pieces.

In fact, the blender is designed to cut food with stronger forces than the grinder, since blending requires a smoother and softer “result” than grinding.

Therefore, a blender can smash things stronger than a grinder. When putting your herbs (or spices) into a blender, there is no need to worry about the food not being grounded enough.